On this day, ten years ago, I put up my first blog post – without any idea where it might lead. 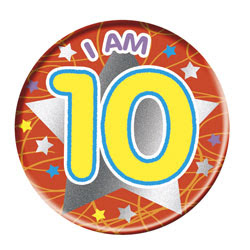 It really only seems relatively recently, when I was typing up the ‘I am 5’ post - 5 short years ago. I am now looking forward to some kind of semi-retirement over the next few years, with at least lecturing and writing forming the cornerstone of that, and at the very least, it should allow more blog time, and some rules and period research.

The blog has seen massive change - even despite its limited scope. Fitz and I started this as a way of keeping photos of the odd game ‘somewhere’, actually having a central focus for playing games and thereby creating a need to fill the blog – so it would be self-fulfilling, compelling us to fill up the space.

That original premise has morphed out of control.

I’ve found good gaming friends right on my very doorstep, and re-found some old ones – who I thought lost to time.

I’ve formed great friendships with other bloggers from the UK to the USA, even been given figures (you are the men Sprinks & Steve), and played across the world in epic and dramatic AWI games with Steve & Jon (and his excellent rules), had great blogger visits (Tony from Prometheus in Aspic), and played a small part in an online battle of Germantown – which was a real nail-biter (thank you Norm), and have helped form part of ww2 campaigns (Steve’s 2019 Firestorm Russian Front was epic).

I've missed a lot of other stuff and people there - and I never envisaged any of this 10 years ago, and granted I don’t post a lot, but have discovered new found love for the hobby and all its varied facets in the last 10 years, and the great people that form this eclectic bunch that we call 'wargamers'. 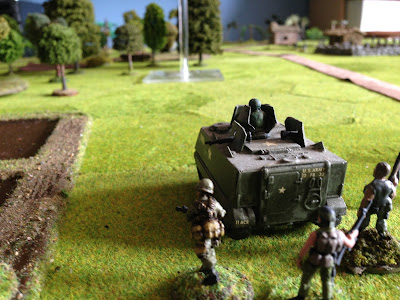 So, I’m hoping to get more from the blog and develop some of the things I’ve already got - as example:

Field of Battle (you knew it would come up), continues to be my faviurite set of rules that is both straightforward and derives an excellent narrative – more to come from this.

Field of Battle ww2 – the bastard son of above, and yet I was able to do Arnhem with in in 2020. With each stand being a company: Bulge, Normandy, Crete – then telescoped into Vietnam and Falklands actions. A really underrated set of rules.

More Aquilonian Special forces stuff. Started that story and never finished. A way of doing moderns, with a little bit of fun, and not getting any tech or operational stuff wrong, or misinterpreting it.

The grand Altar of Freedom experiment – I remain convinced that Little Wars TV’s ‘Altar of Freedom’ rules, could be re-directed toward a set of battlefield/campaign rules for Nine-Years-War / Marlburian (1685-1715). …this might develop further.

All those other rulesets which are sure to usurp all of the above, including Koenig Krieg and others. It’s what the hobby is about really.

Thanks to everyone for your comments and time over the years. Here’s to the next TEN!

Email ThisBlogThis!Share to TwitterShare to FacebookShare to Pinterest
Labels: State of the Nation

We fought this relatively small battle (with Greene vs a weakened Rawdon after Guilford Court House) using the ACW rules Fire & Fury, but with online (yahoo group originally) variants for the AWI.

We've been trying a lot of AWI sets recently, though the F&F variant has some nice features:

Units are sometimes fairly big (10 or 11 stands at max, with a few 2 stand units), which means that they take up a lot of real estate on the table, but it all still works - though 25mm means a bigger table.

D10 with mods control degree of movement and rally etc.

A lot of features that we like to see as part of any AWI set:

In the game we saw:
All in all, it is very representative of period characteristics. I think with experience comes the ability to zip through modifiers for all the players - which was the only thing that slowed us a bit - but that's no real issue.
Yes, it's more AWI in a sea of recent AWI games, but we're a little obsessed. Next game will probably entail a subtle change of pace. 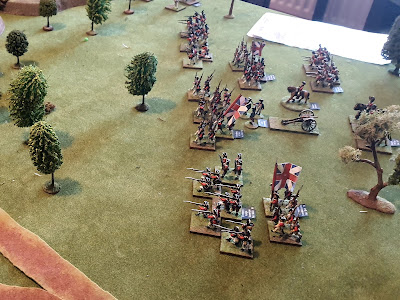 In a vain attempt to get a post by the end of the month (cutting it fine I know), I present: 'Games that we have set up but not played yet' :

Hobkirk's Hill, using the AWI version of Fire & Fury (there is such a thing online, but I'm not sure about the links). So, big battalions, considering it's 25mm in this instance, and this is a mid-week sub for our normal D&D game.

'Surely not more AWI?' I hear you cry, but we are on an eternal quest here for the perfect set of American Revolution rules (I know Field of Battle is the answer, but no one else agrees - shock!) 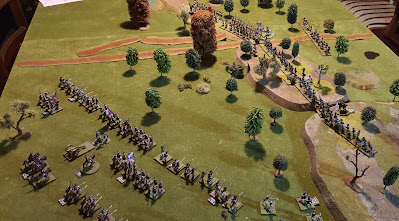 And secondly, a blatant attempt at throwing enough 1/300 material at the table, in the vain hope that there might be a Modern Spearhead scenario emerging ...watch this space...