We've played other versions of Command & Colours, though hadn't yet tried the (early) Napoleonics versions. Interest in this really stemmed from thoughts of a potential large scale game with non-wargamer types, with figures and my larger hexes - and thus a suitable 'gateway' set of rules, and some of the rules that we've heard about the epic scale version of C&CN (C in C hands out card to flank commander, who acts upon it - but with his own smaller unit decisions etc.) sound excellent for a great day's gaming.

So ultimately then, the game will be used with my 20mm plastic collection, though best to try out the rules with the little blocks first.

Only sticking points were (1) there's a little more complexity, though you quickly get used to it and (2) the rules for squares, where cards are withdrawn from the hand, so as to reduce flexibility - seem fine, but were a little clunky on the day. 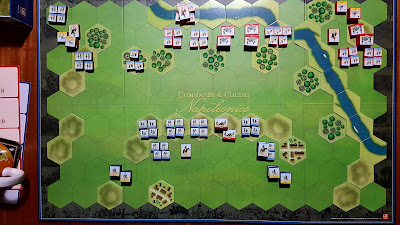 That said, it's probably something that becomes second nature during a game. The blocks are great, and very tactile, and the sticker detail is a positive replacement for miniatures. That said, I began to think that life was too short to stick all of those bloody stickers on at the weekend; I don't think I'll be getting too many of the expansions :( . I might be downloading the scenarios and going with miniatures.

So, we tried the first scenario from the main game (Rolica, 1708). As usual, and in line with what we've already seen, some great and tense moments, and all finished quite quickly. A unique system for modelling fog of war, and some of the strategy cards come just at the right moment (or wrong moment, depending on your point of view). 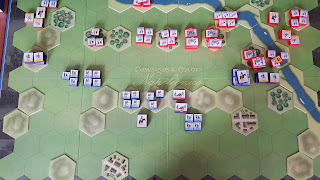 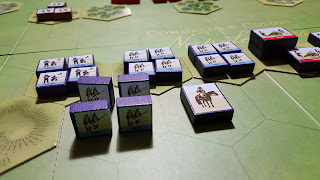 I prefer laying the tiles down, as opposed to the popular...'setting them on edge'. (Makes for better pics too...). 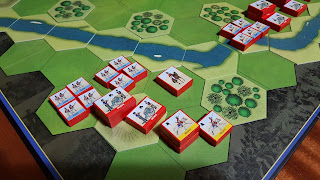 Thrusts on the French and British lefts respectively, would see the development of some flanking actions during the day. 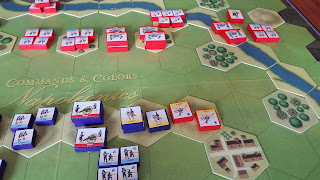 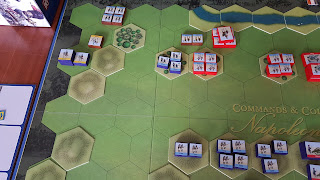 French moves on their left. 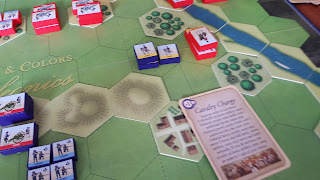 A cavalry charge by the British in a frantic attempt to wear down the flank. 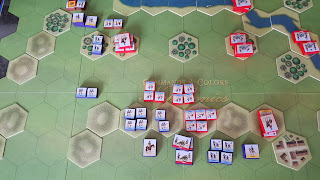 The British launched a frontal attack on the French defences, and it almost looked like working...for a time. 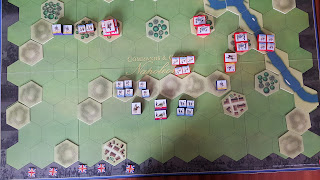 By game end, the French have done enough damage in blunting the British attack, such that they have captured enough flags to win. Certainly, a close game, with clear victory conditions, and much room for hacking with miniatures.

I can see the 'epic' version of this working well with non-wargamers (although suspect there might be beer involved too...)