With little time to set up the next game, we opted to do something quite simple. Neil Thomas had an interesting book out a number of years ago entitled 'Wargaming, An Introduction' (still obtainable on Amazon). 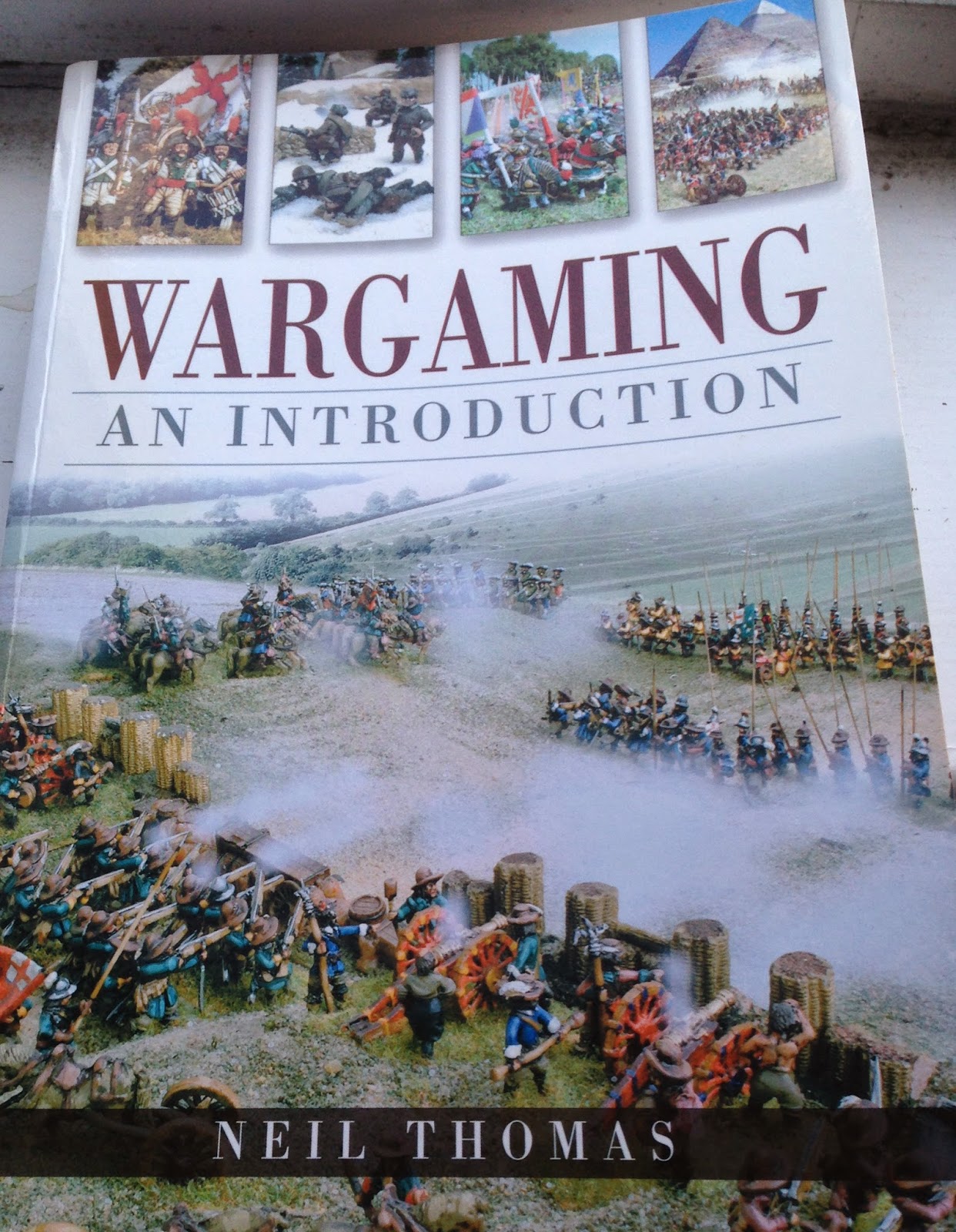 There are some nice rules mechanisms here and some very introductory mechanics. That said, there are a number of areas which aren't covered comprehensively (the rules are simple introductory style after all) and areas such as flanking and arc of fire were swiftly transplanted from other sets as 'house rules' as we played.

One of Neil's other publications is an Ancient/Medieval variant which will also be looked at here at some stage.

As stated, the set is very much introductory, though most wargamers will add and tinker (even during play) in order to have the mechanisms achieve full effect. 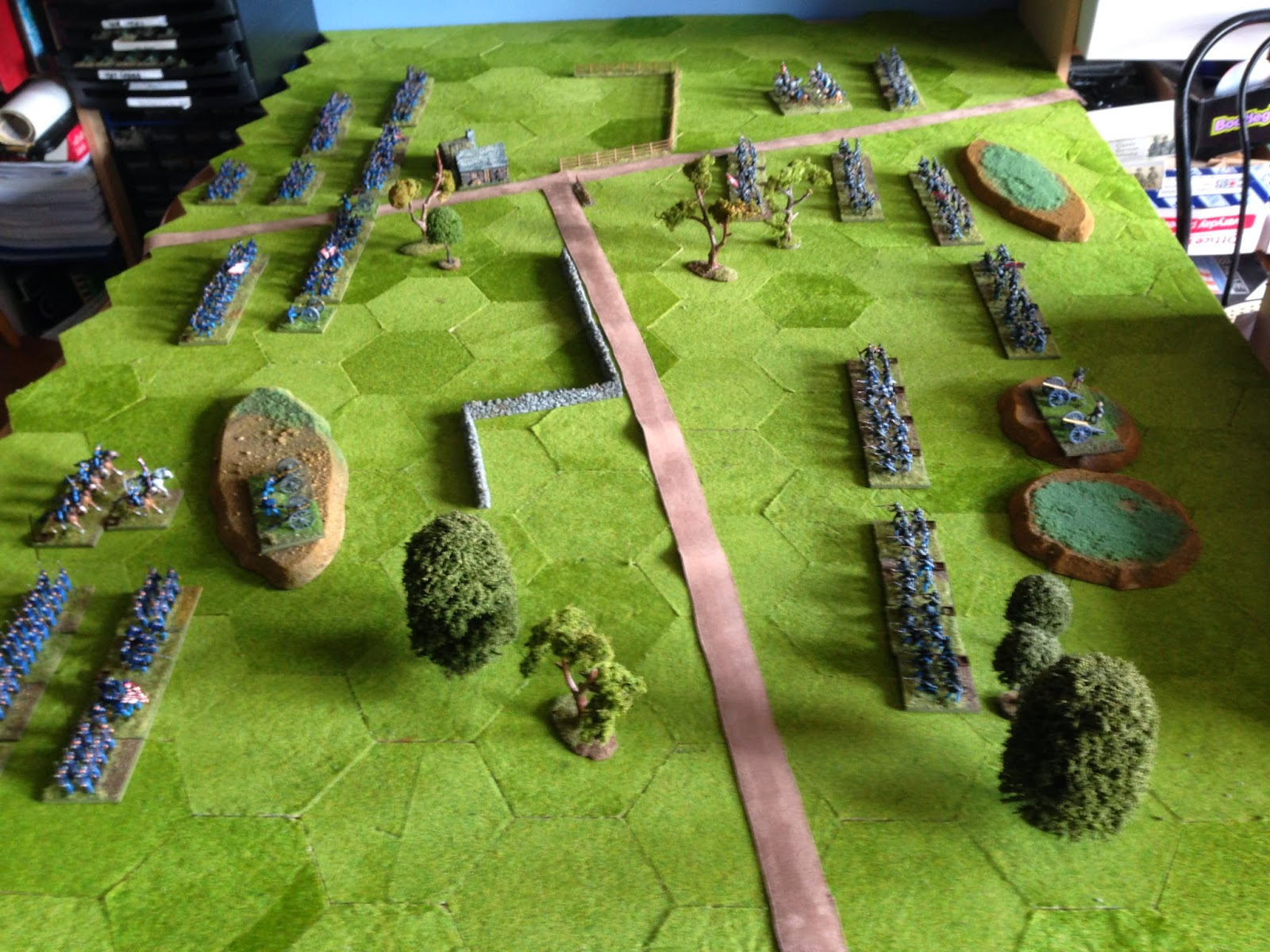 The initial setup pitted a roughly equivalent Confederate vs Uniuon force, though the Union had a slight edge in artillery with the Rebs having a few elite units. 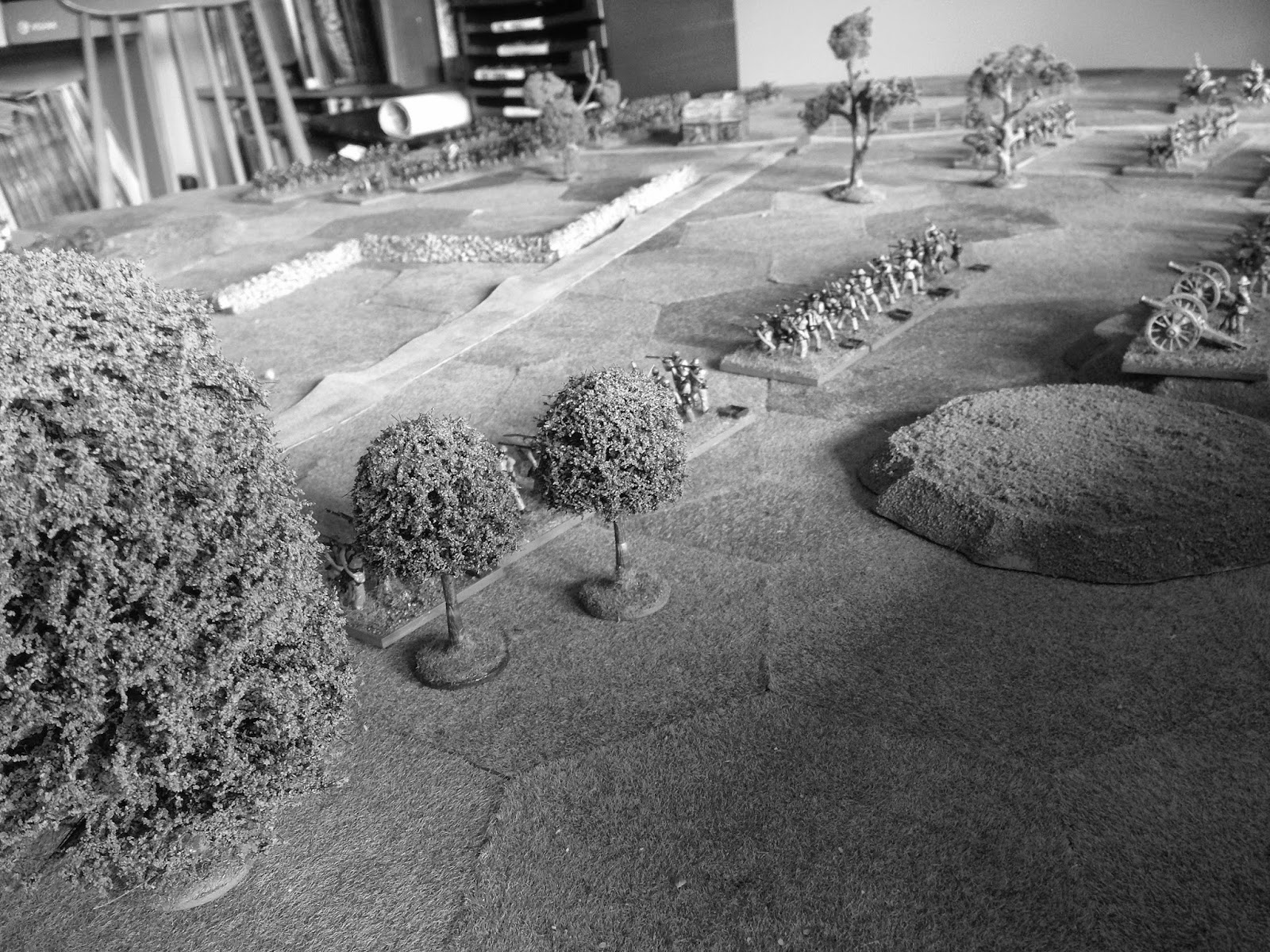 A shot from our roving 1863 photographer as the rebs advance. 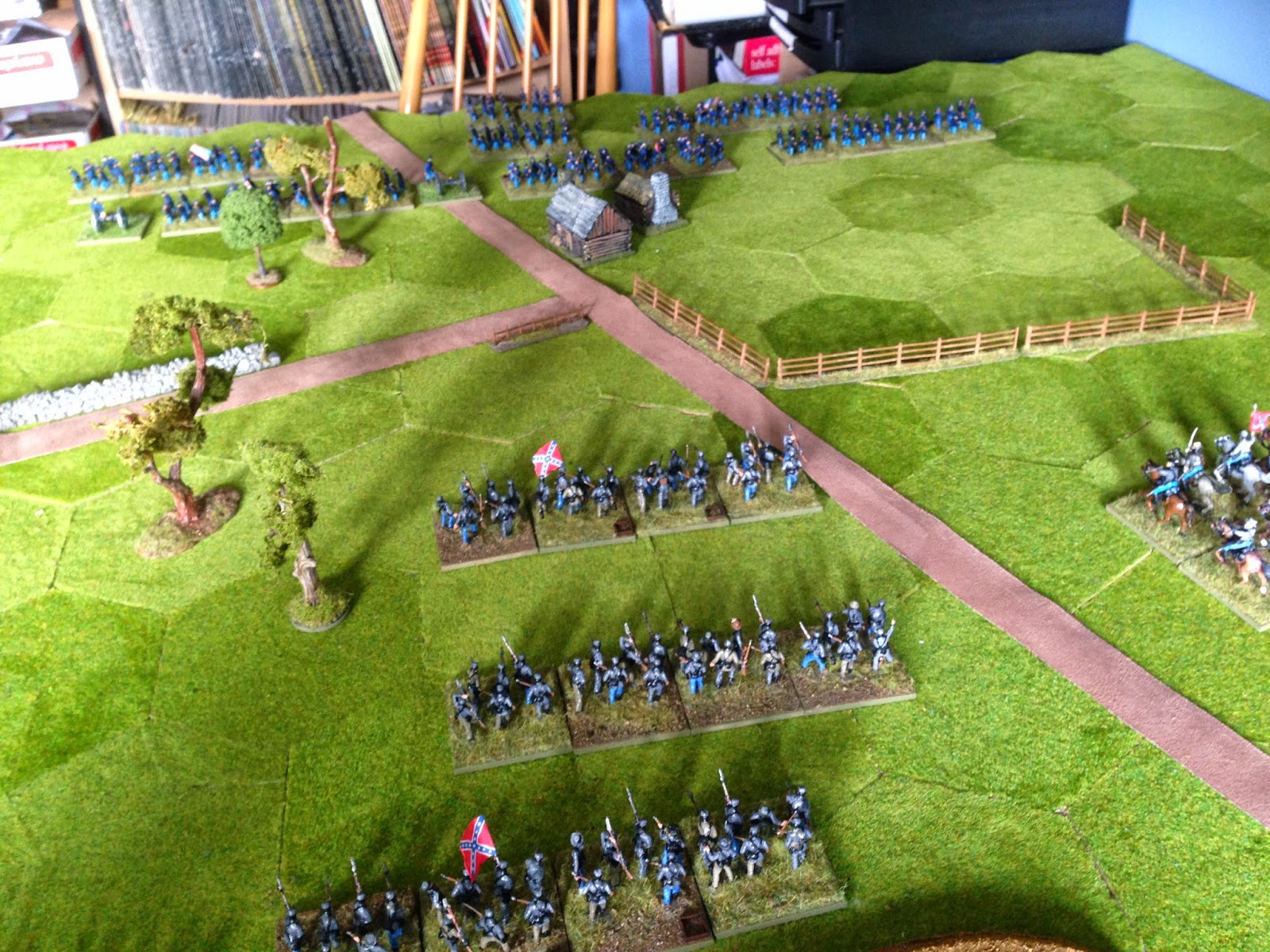 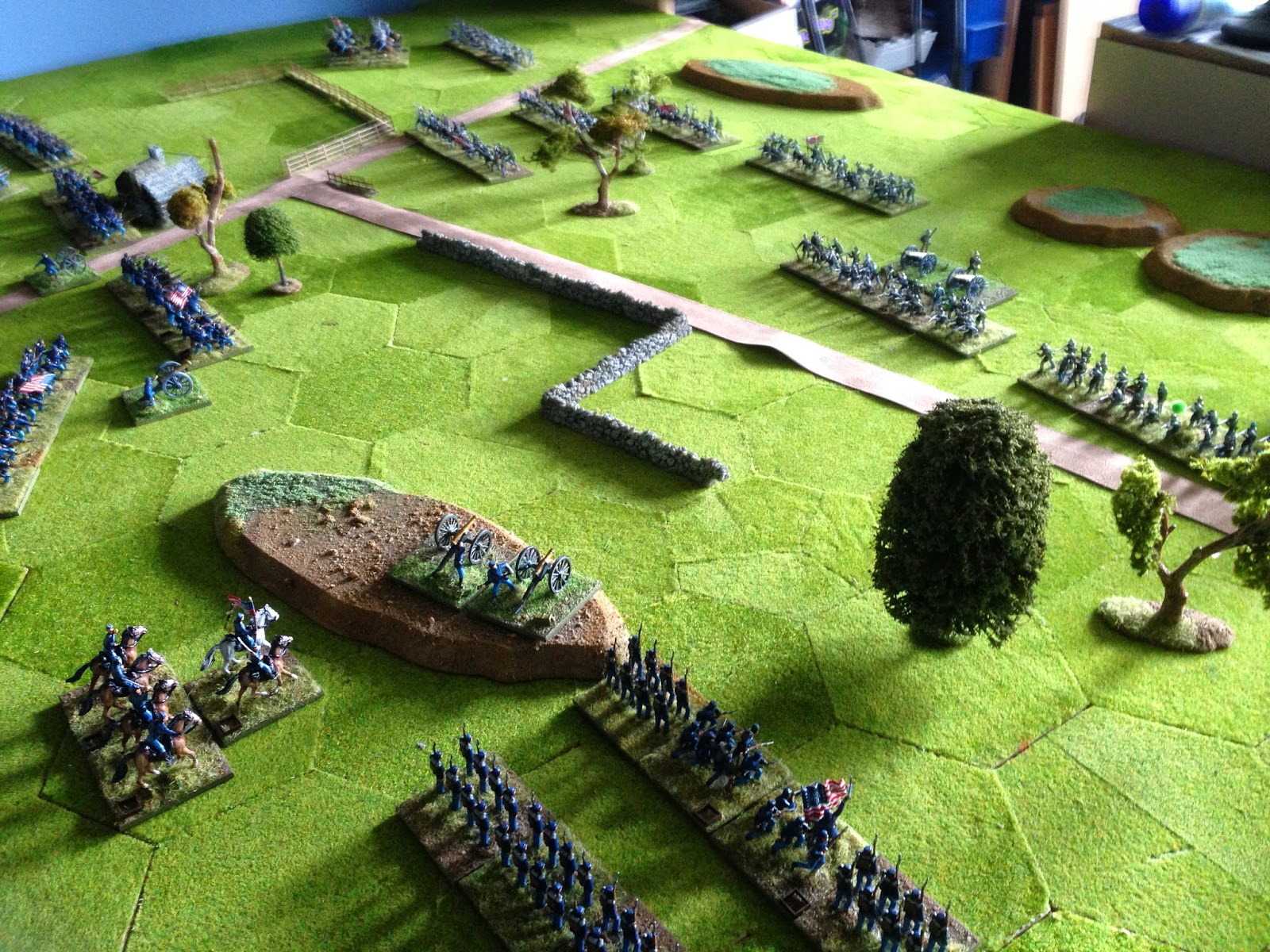 Opting for an early assault on the Union centre, the Confederates had some success in driving back the apparently less able Union troops. 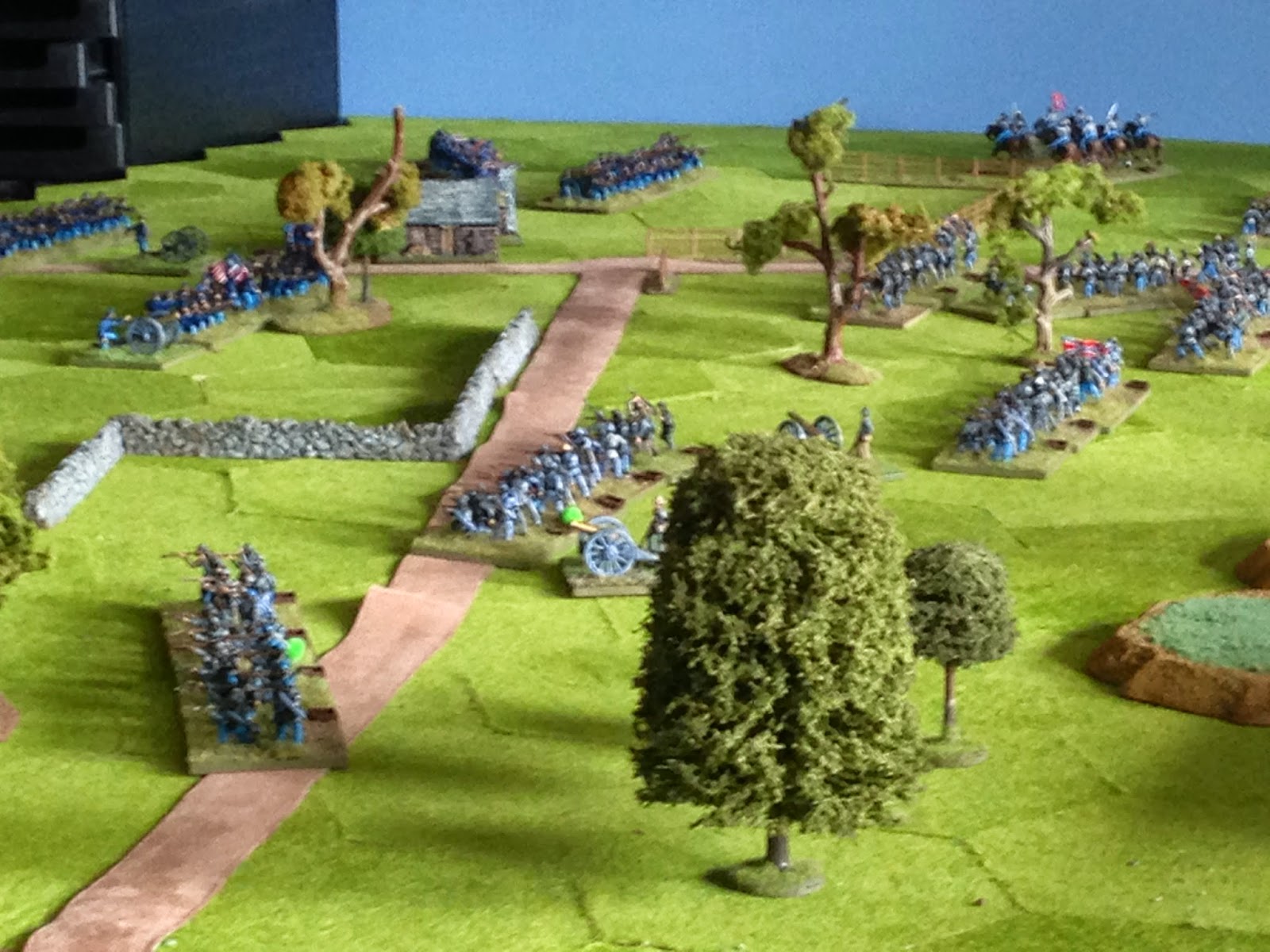 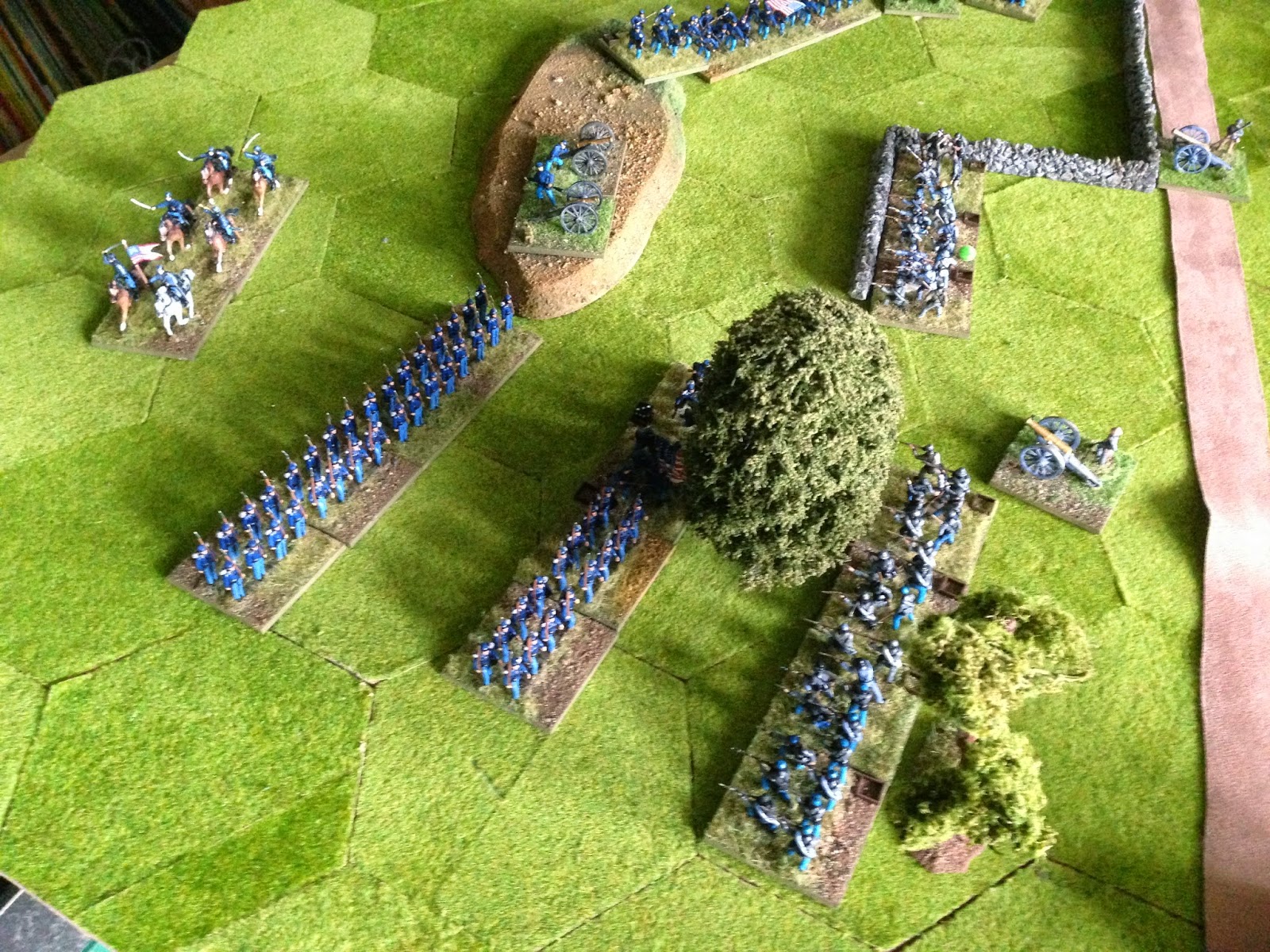 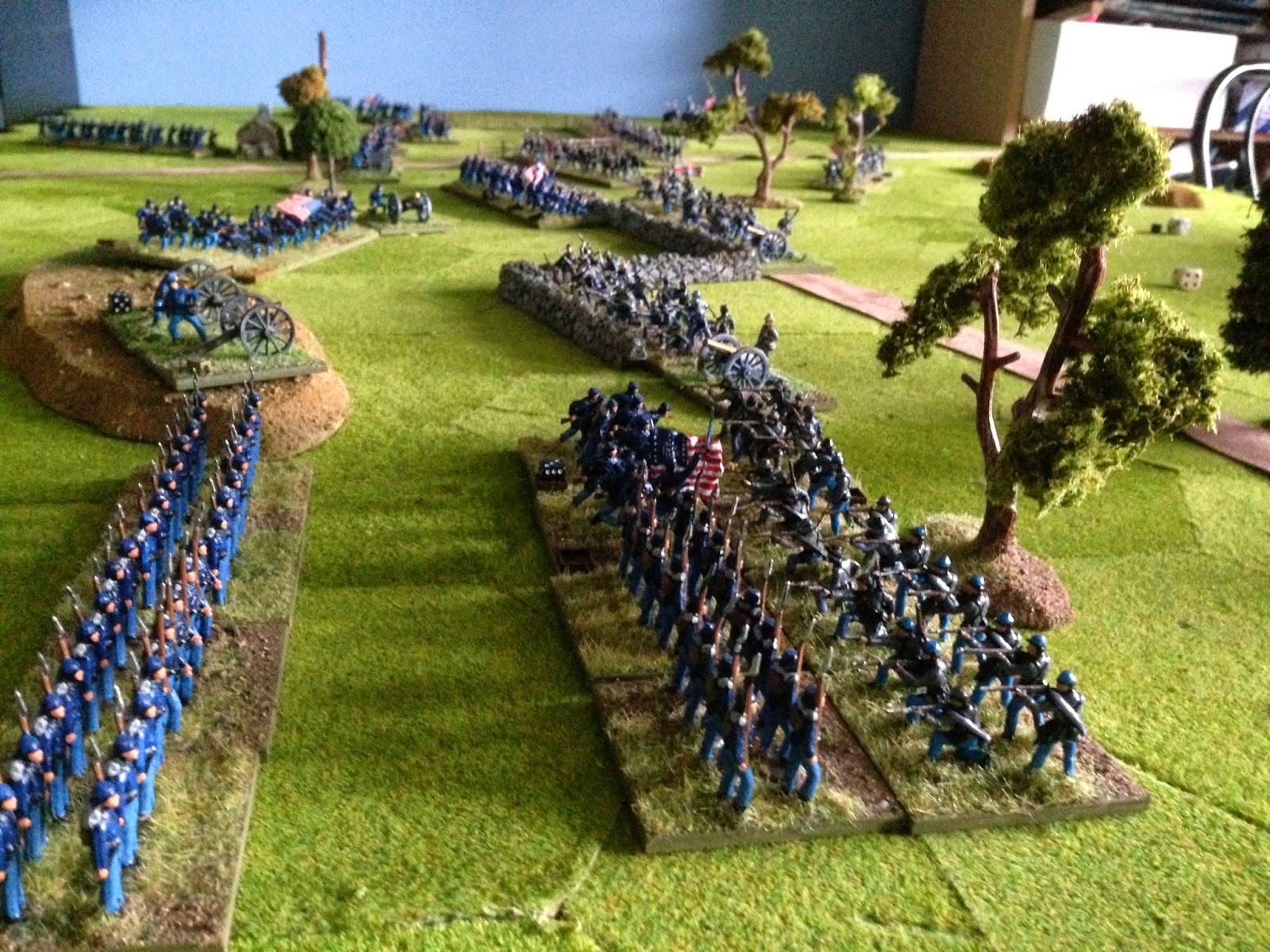 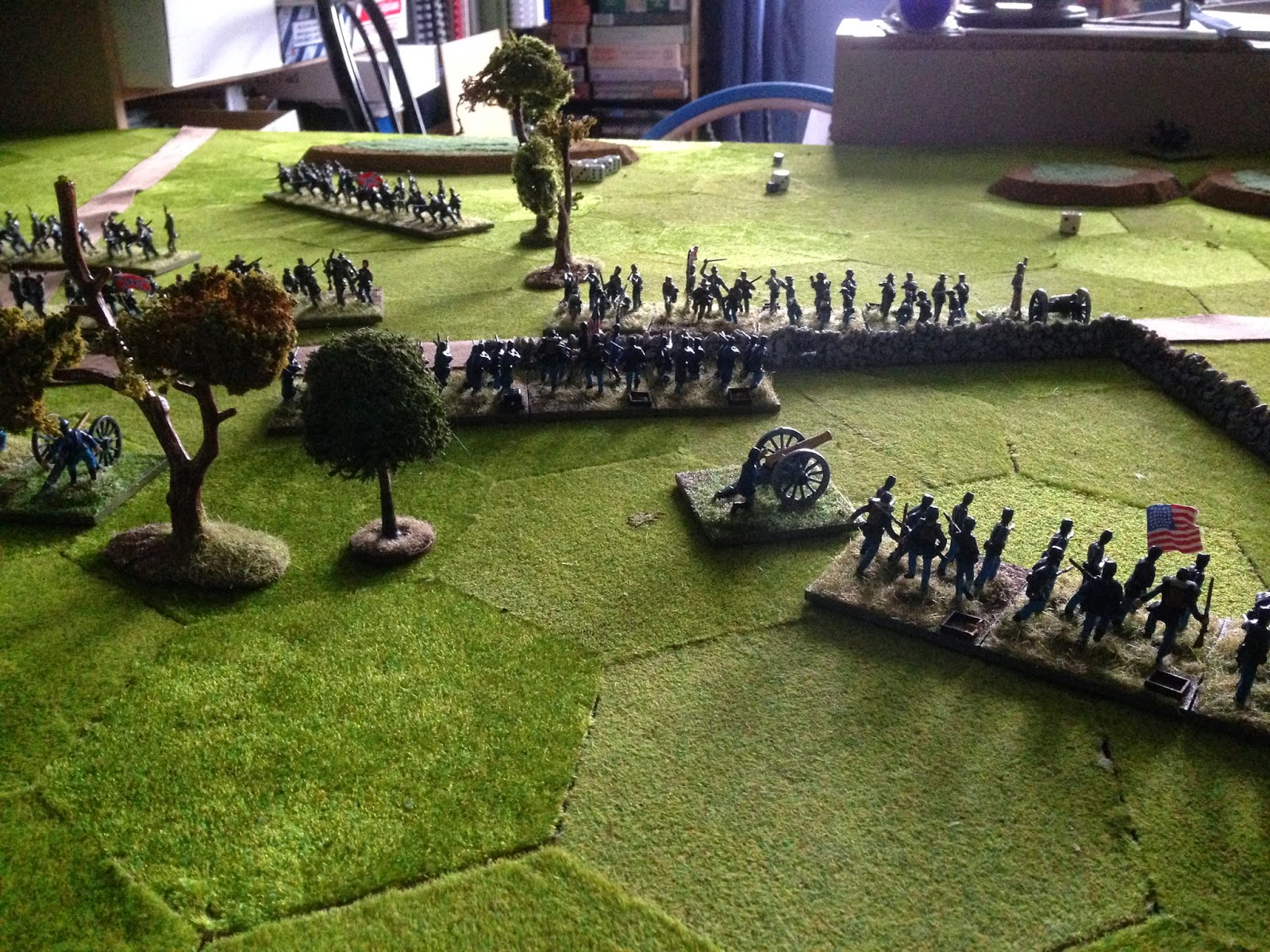 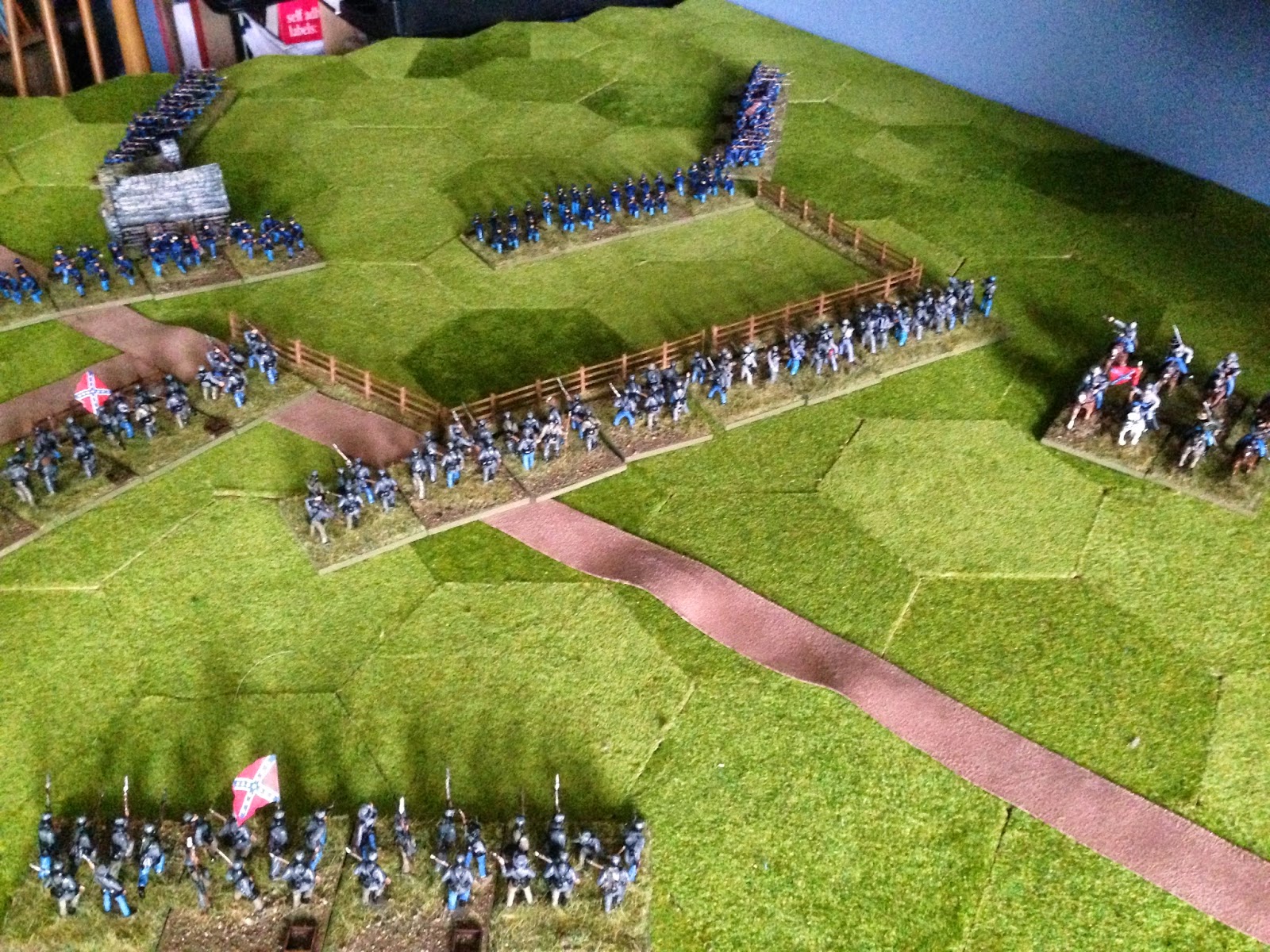 The centre and Union left also become dangerous as regiments began to engage and be forced back in piecemeal fashion. 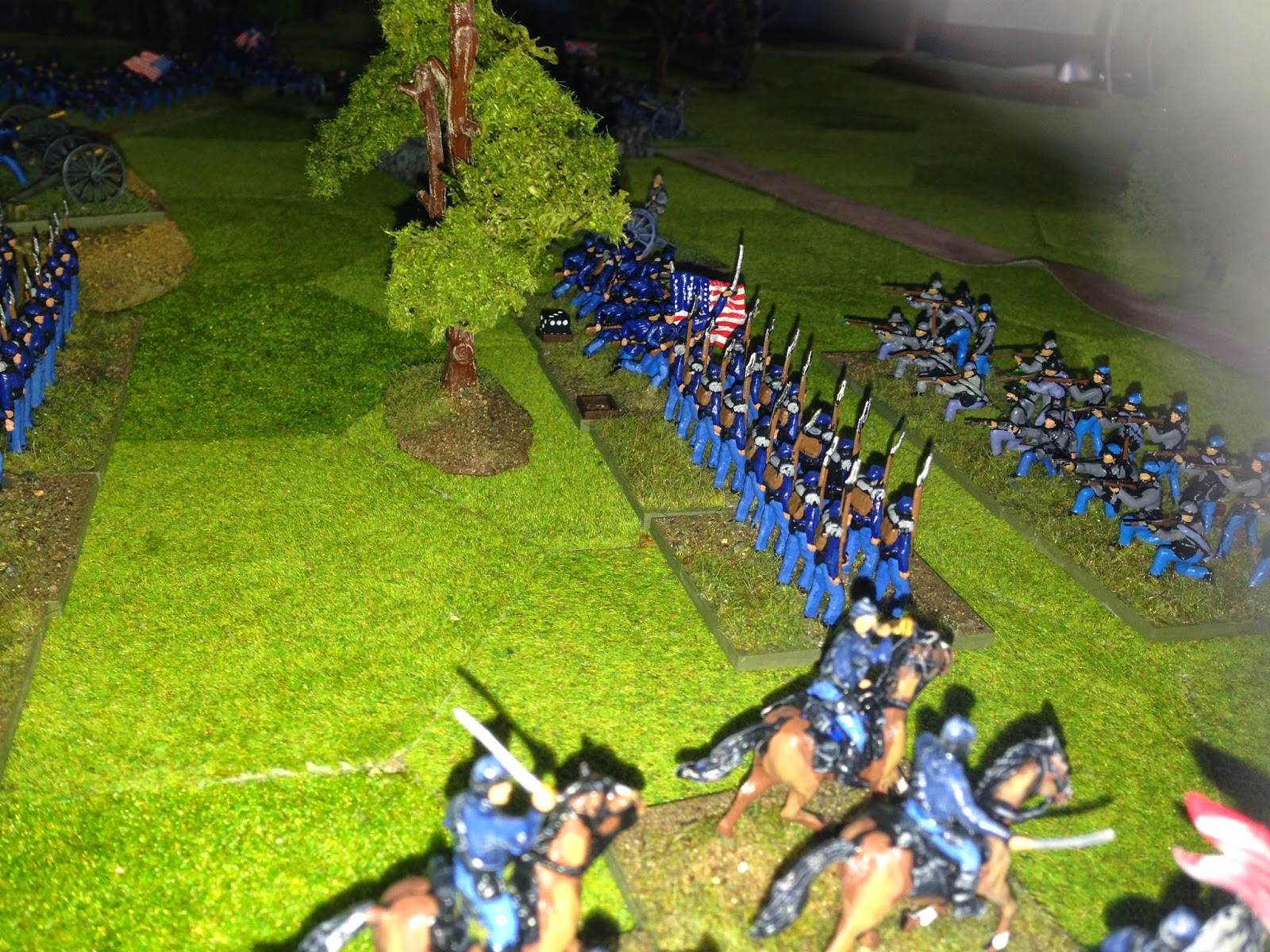 The arrival of cavalry on the flank, and their subsequent dismounted action helped to secure the Union right. 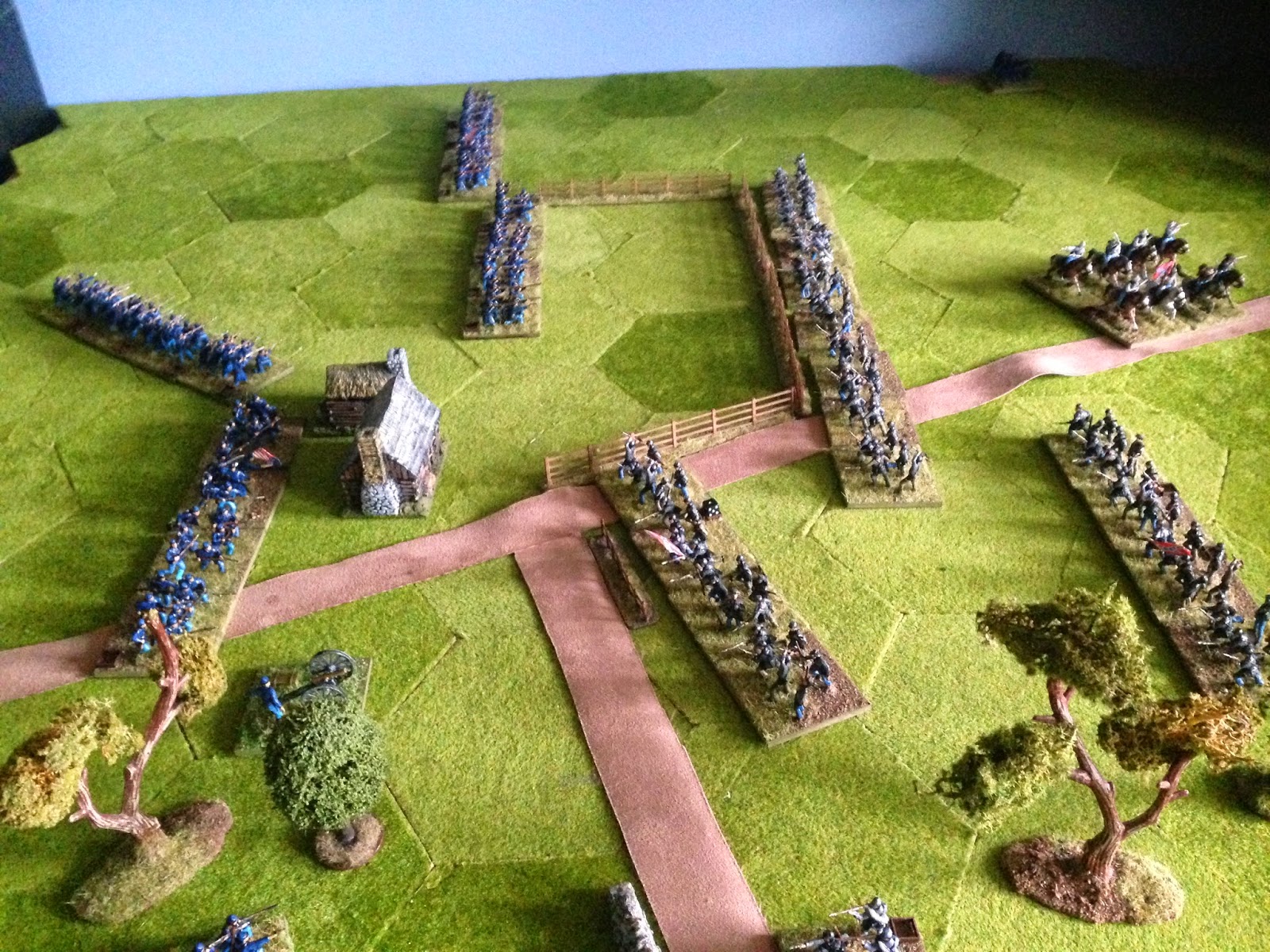 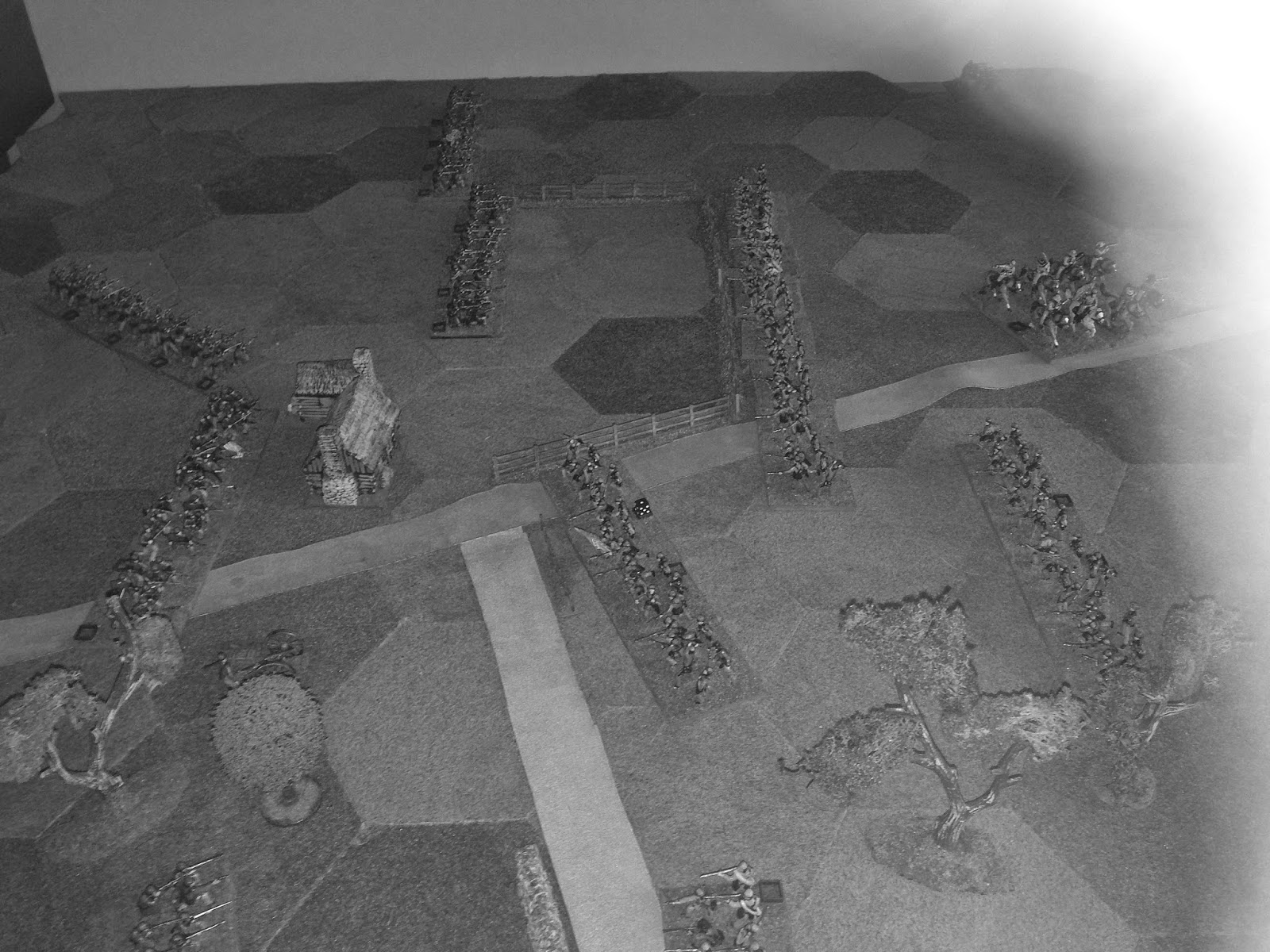 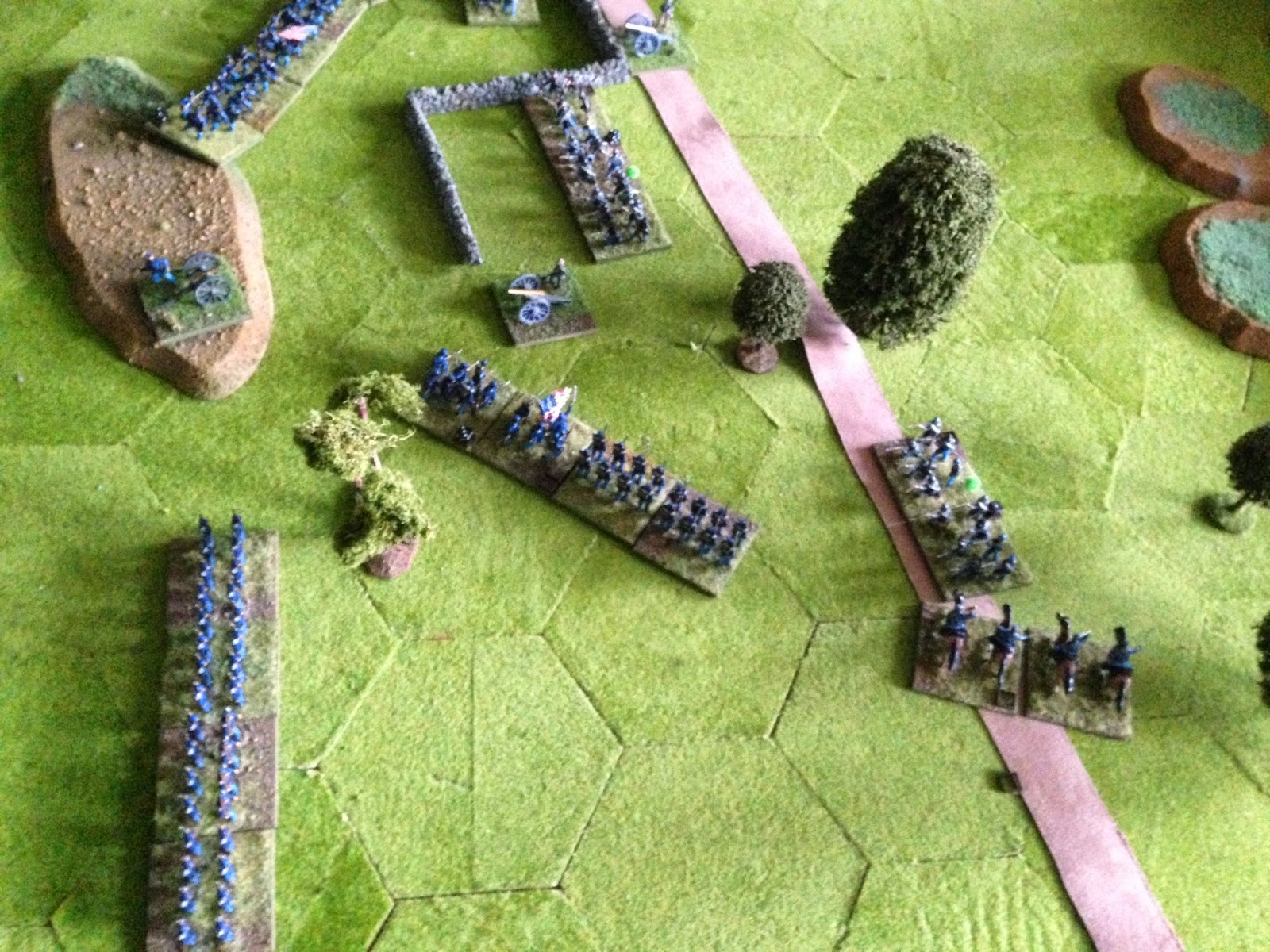 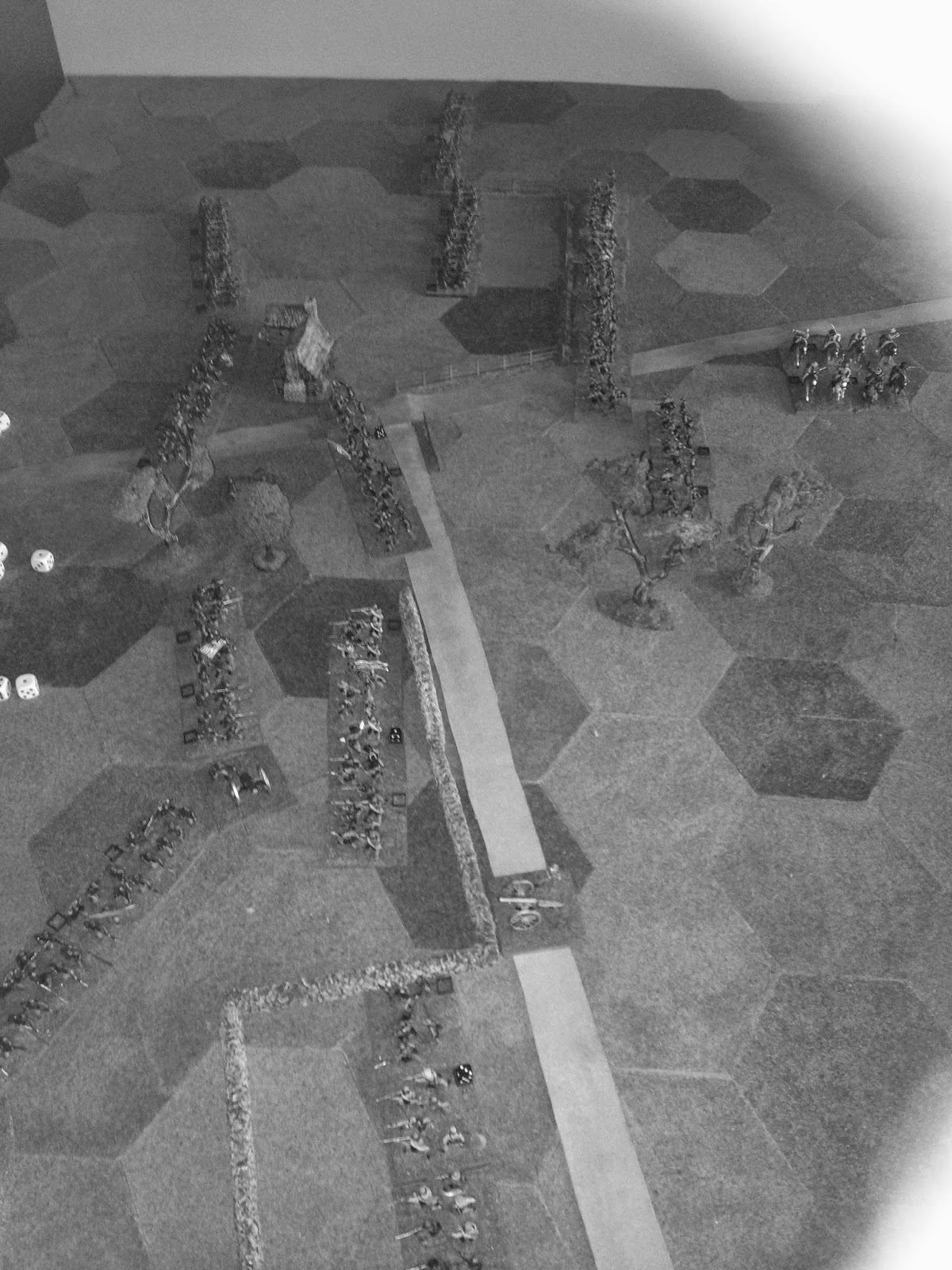 As flanks were subject to withering fire from both sides, Union troops were pushed back, while Confederate attacks were held by Union artillery. 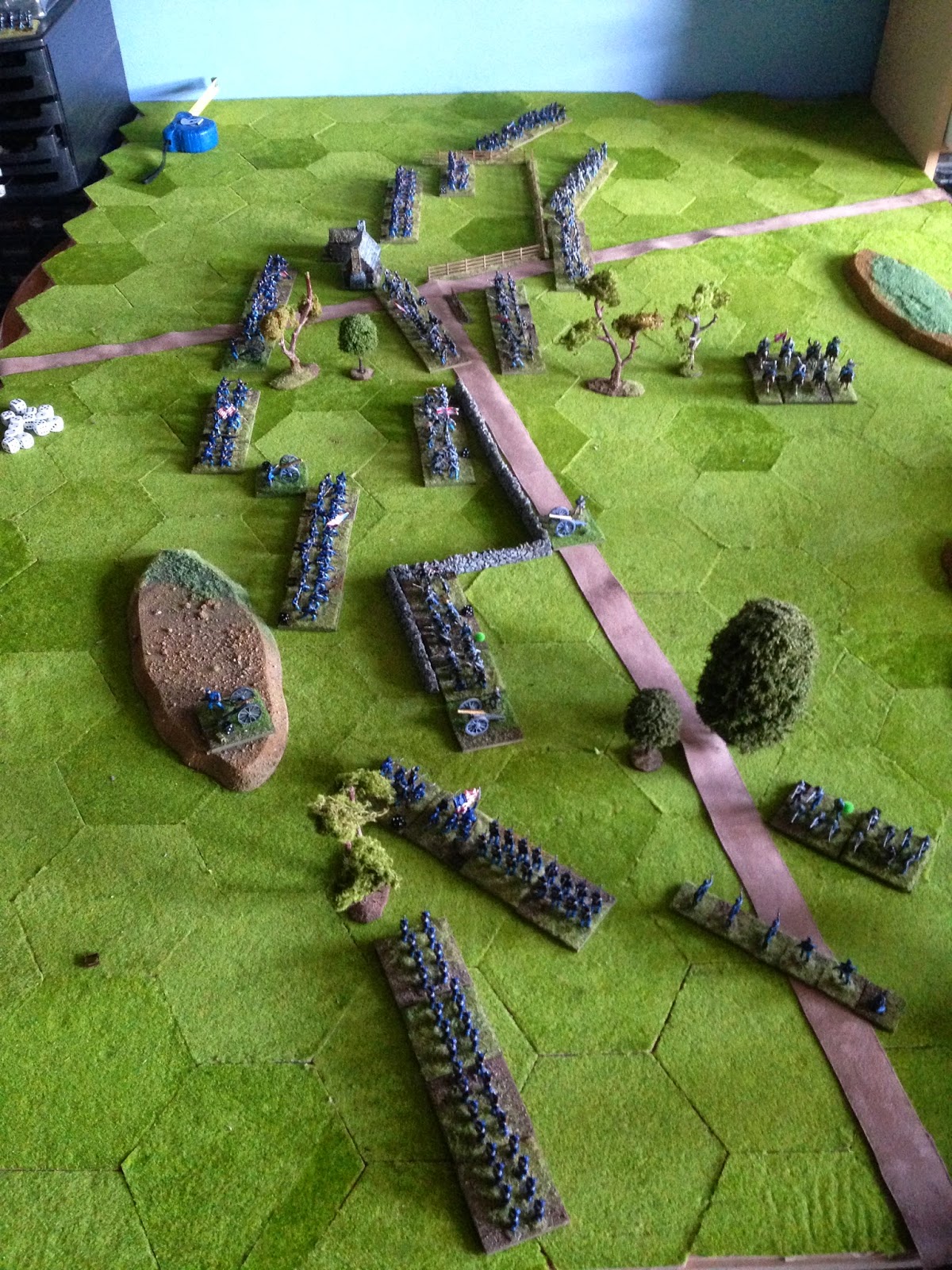 Union pressure however, with mounting numbers, slowly began to turn the flanks as the Rebs ran out of manpower. 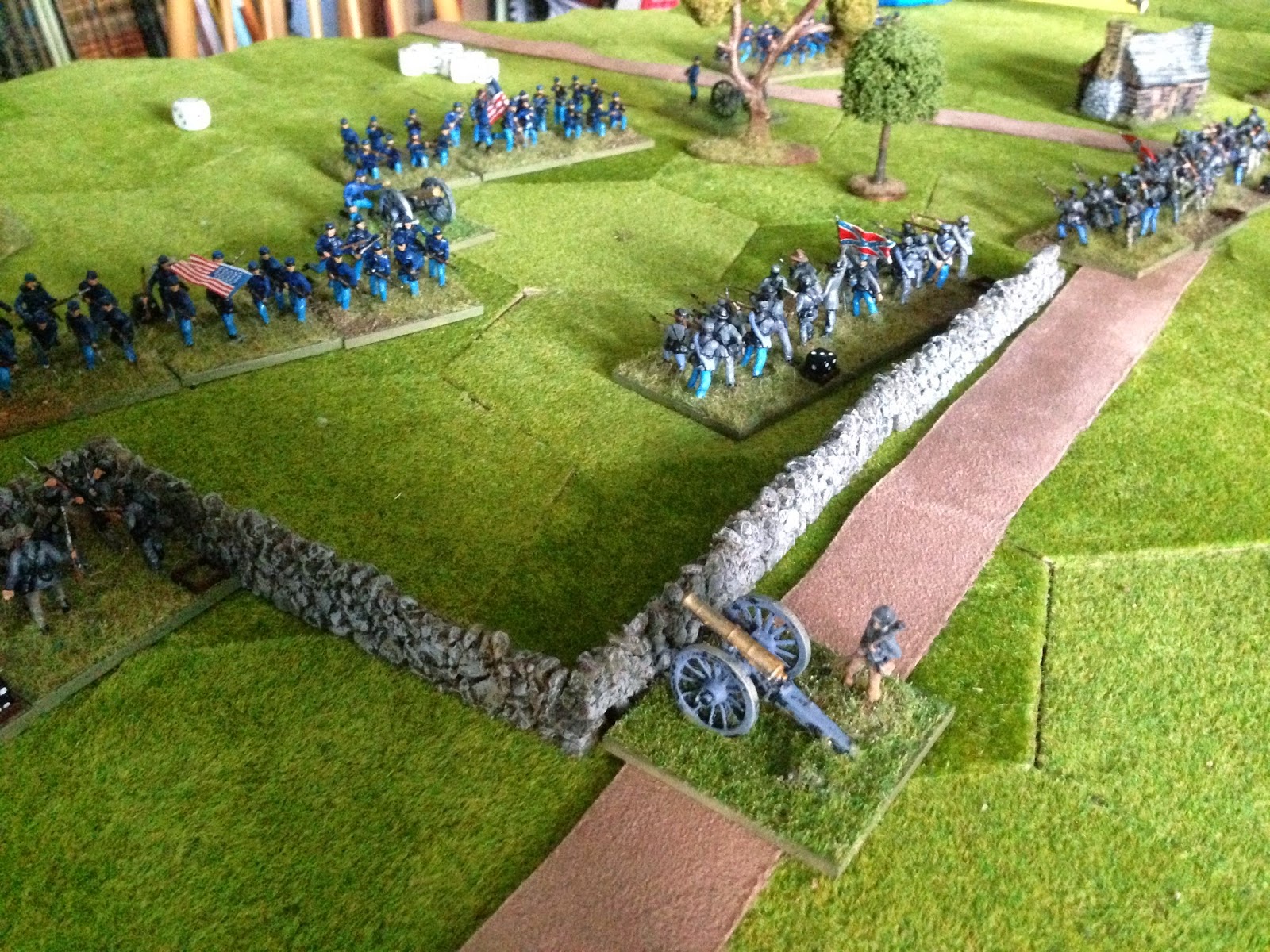 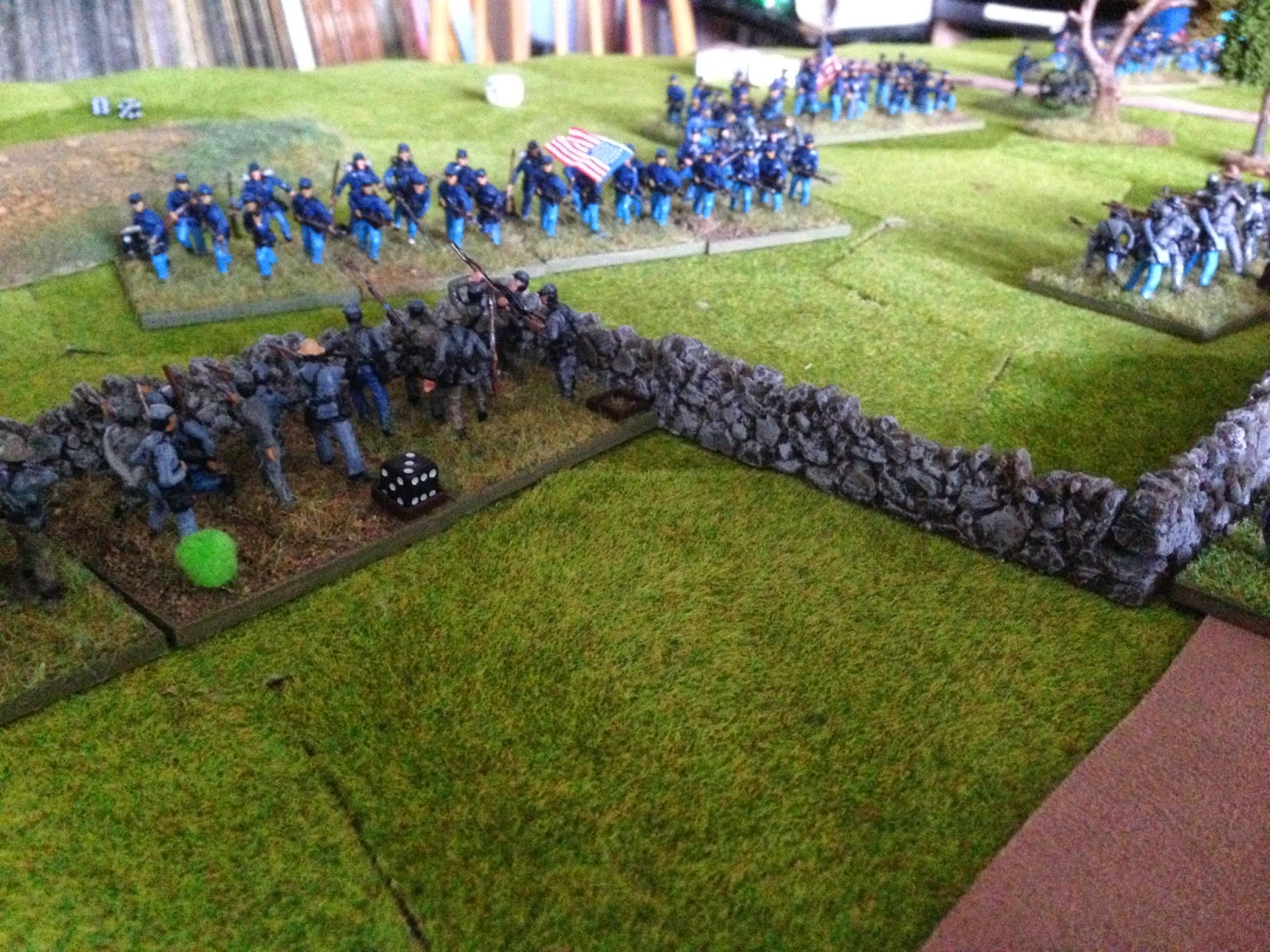 Shots of the 'angle' where regiment after regiment was forced back. 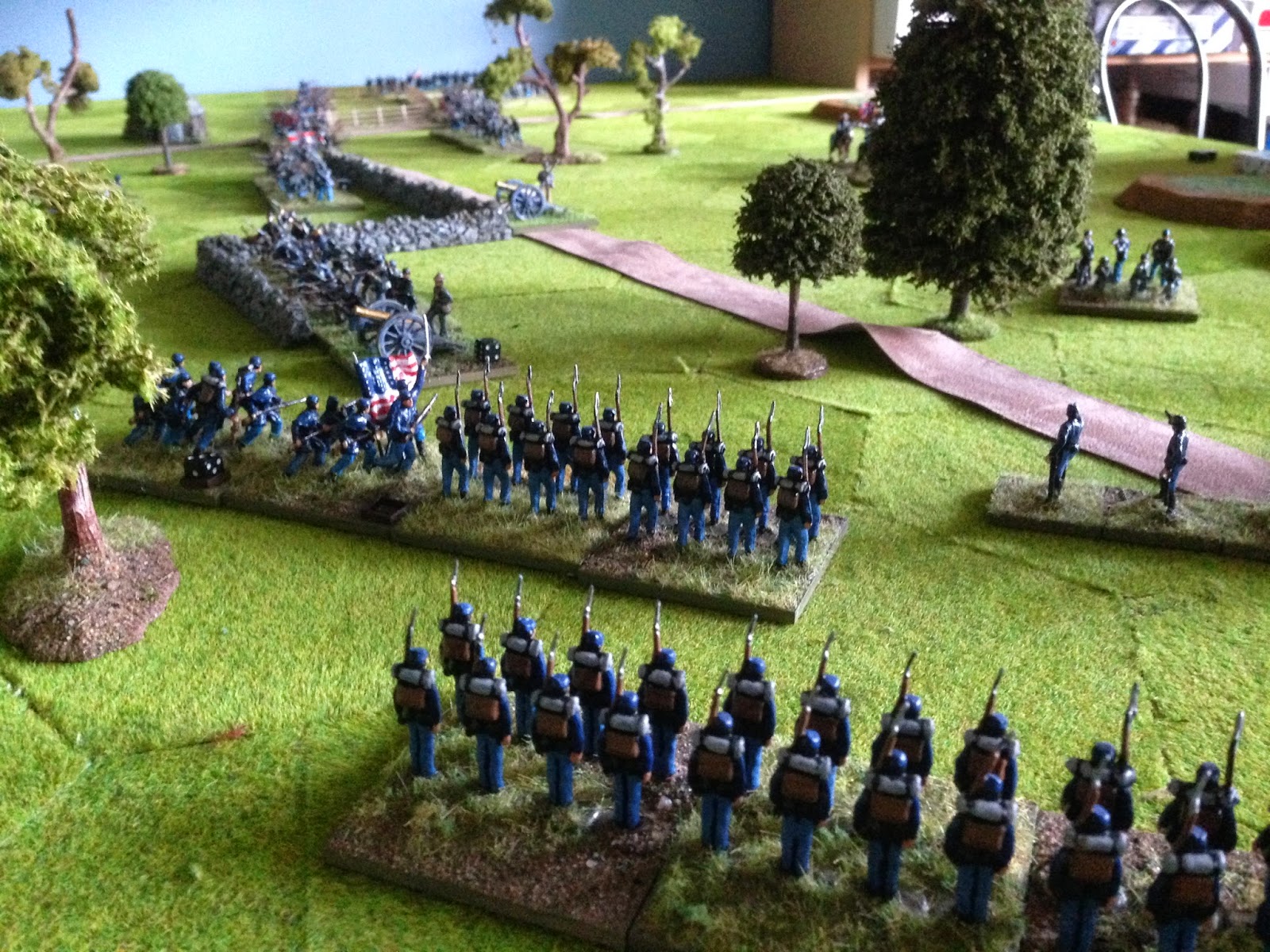 With the Union right flank secure, and the left flank unlikely to hold, the game was all but up for the Confederates. 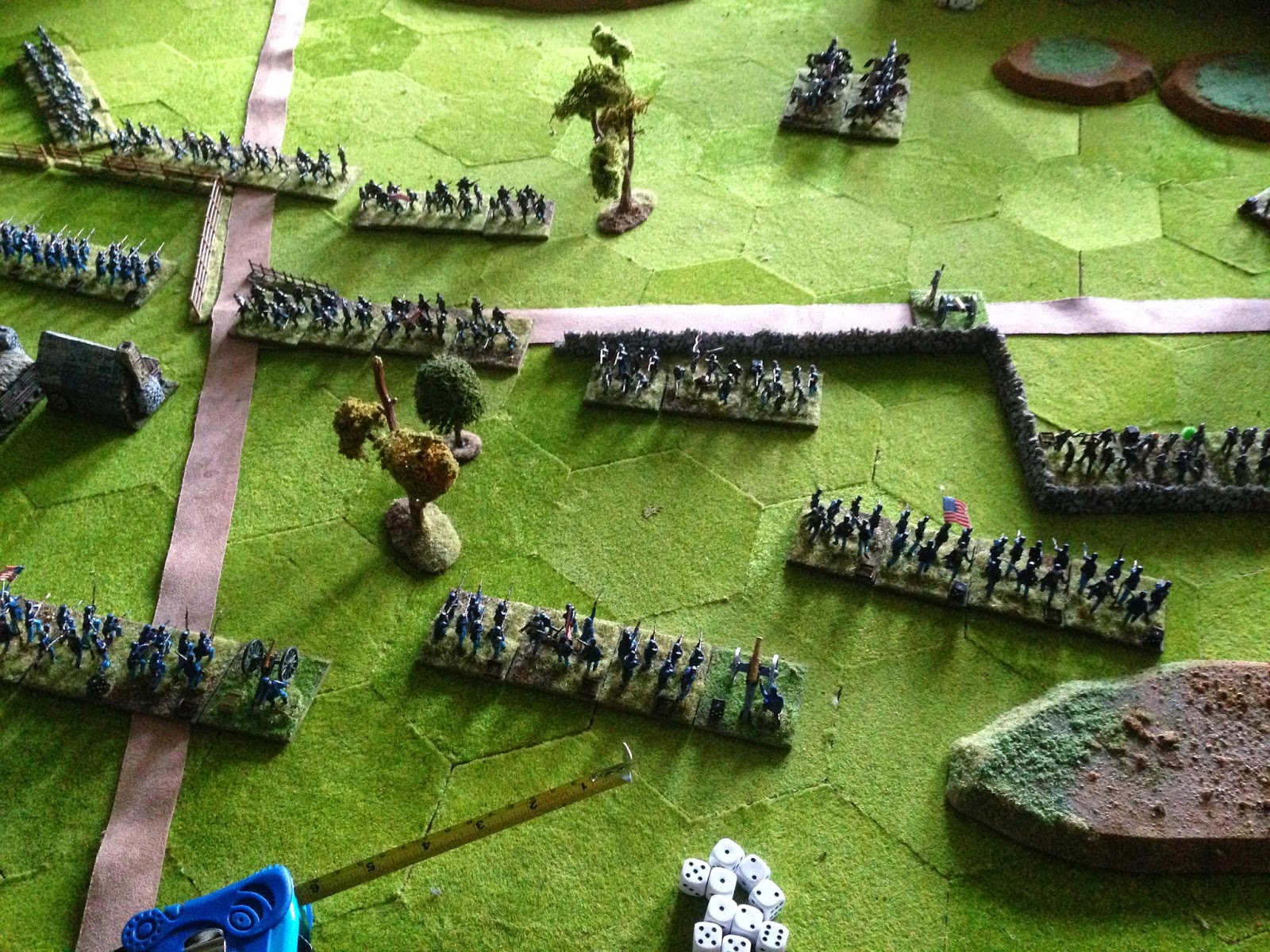 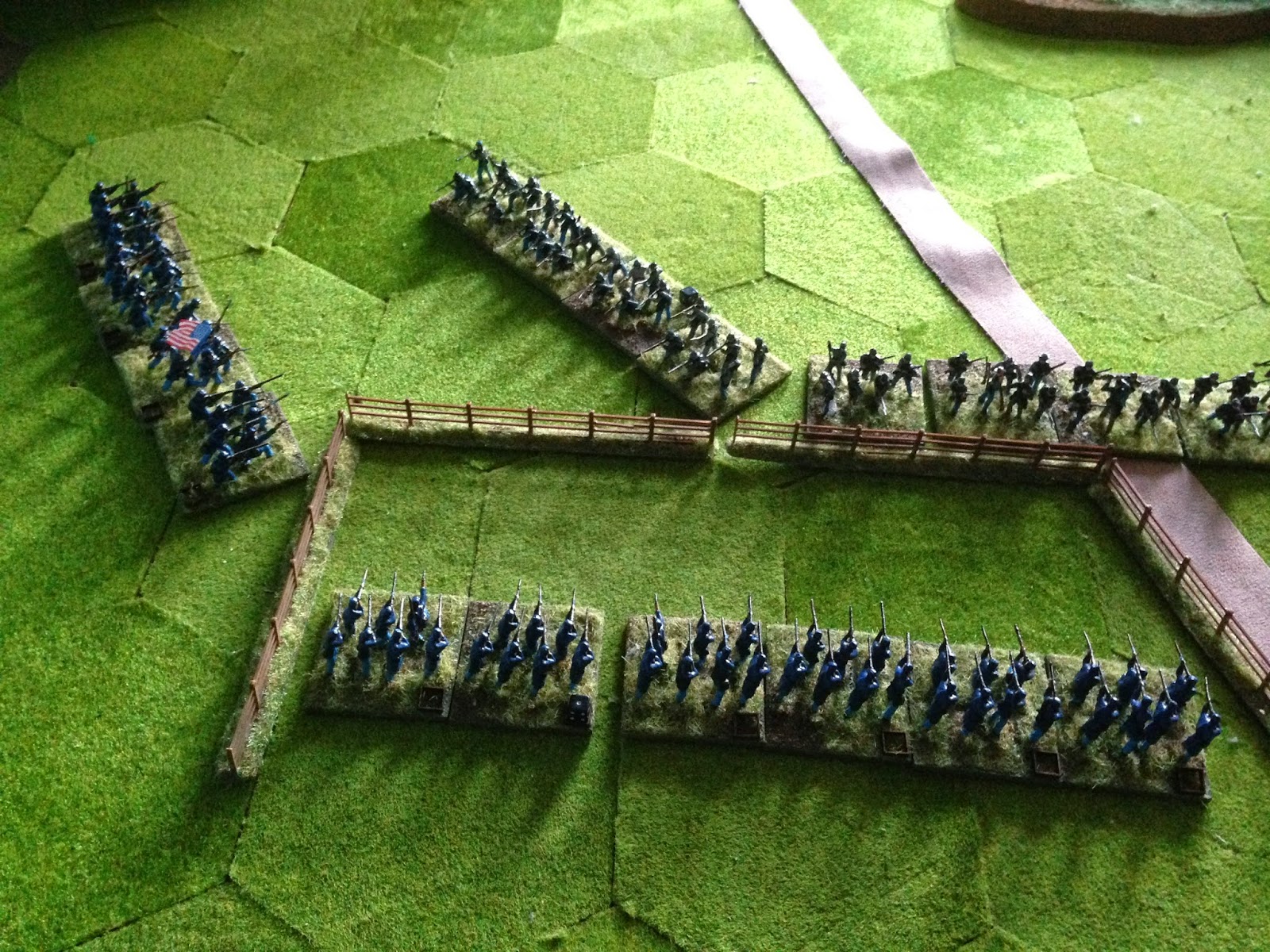 The rules are simple, but do provide a tense game. Rallying can mean that regiments will find full strength again, though this can only happen if they are kept out of range and as morale permits, so as the battle rages, units get weaker and weaker until their effectiveness dwindles. We probably used a few too many units rather than the 8 or so that the author recommends so the game went on a bit. I can see though how similar mechanisms might make an ancients game work well with 8 units a side.

More to come from these elegant rules though I can see a few house rules creeping in.

The book is worth a read if you are looking for something on Amazon and Neil has a Napoleonic book and 19th century version published. I also believe he has a '1 hour wargame' style book coming out.