A small interlude between holiday weekends allowed for a quick game.

We'd recently found Ivan Sorenson's '5 Core' rules, so we thought we'd give them a quick go, as time was limited. 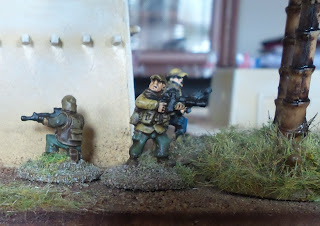 The scenario? A couple of contractor teams trying to get back to their 4x4. (Of course the OPFOR didn't even consider sabotaging the engine...)

It was a nice introduction to the rules, which are simple yet subtle, and for me, throw the accepted conventions of skirmish (and otherwise) wargaming away...and start from scratch.

A full review would probably give most of the rules away...suffice to say that there are some key factors which underpin the design.

A great game, but what's really exciting is that Ivan has expanded the core concept into Normandy skirmish (really looking forward to this with my 54mm stuff - I think actually, '5 Men in Normandy' came first), Company level skirmish (for 'Fire Team' style scenarios), and even Brigade level modern command. These DO look interesting 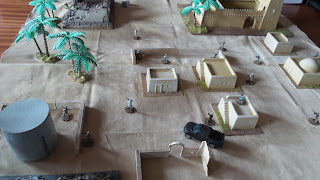 Rough view of the battlefield. Note that the teams will have dangerously open flanks combined with a ratnest of buildings and 'sniper corners'. 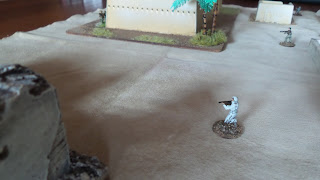 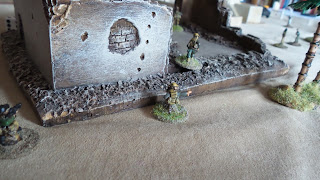 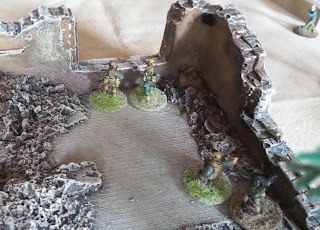 Moving teams to the right, and into cover...before Alpha was almost overwhelmed. 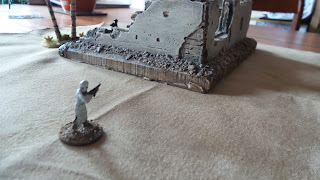 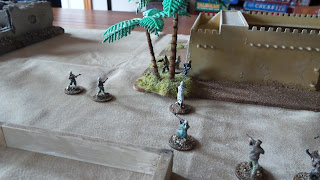 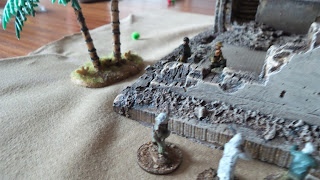 Nice mechanics in the game system here - an overall accurate simulation of firing from cover, combined with reaction fire and a turn sequence which meant that it was difficult to plan for all eventualities. As the OPFOR opened up during a firefight, it almost rendered Alpha immobile for two turns. 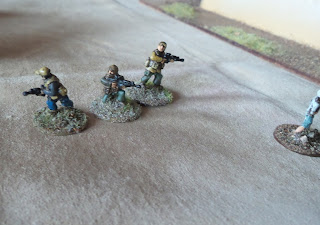 Dashing from cover can work with better trained units - in this case the gamble worked as the OPFOR couldn't bring enough men to bear on the developing situation. Had they rolled a 'scurry' action, the weight of numbers would have been telling. 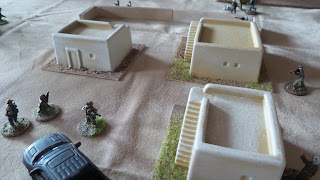 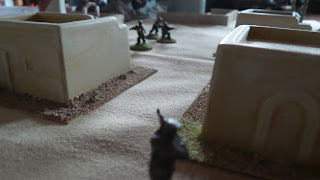 A sniper fires from the buildings during the last minutes. 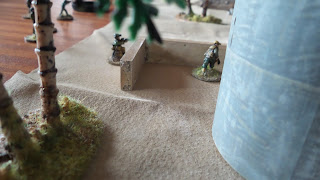 One element pinned down. One of the strengths here, which we didn't use on the day, would be cause and effect relationship between having to cater for casualties. There's a nice 'plug in' nature to these rules, where adding detail is seamless. 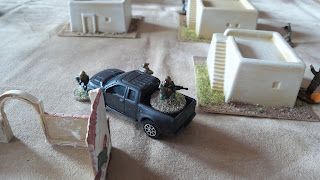 Most of Bravo get to the vehicle and move toward Alpha. Successful for the teams, but at some cost.

The thickness of the PzG book and the 4 page Quick Ref Sheet do seem imposing at first, though the system is quite innovative.

Its a neat system and with the complexity of what it's trying to model, quite slick in terms of what it achieves. Catering for infantry, armour, HE, artillery, troop quality and command inWWII is never easy of course, and the rules do cater for every eventuality.

Highlights include:
Resource management approach in terms of unit activation - although this is easier for better quality troops.
Armoured combat which emphasises the inherent advantages of superior tanks
Particularly bloody repercussions for moving in the open. 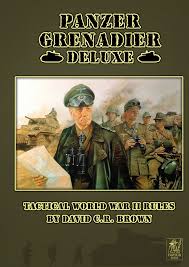 A nice system, which in discussion with Sgt Steiner (and Steve's recent comments over at Sound Officers' Call) make me want to try the 'Battlegroup' system as a comparison...(especially so now that I've heard about Battlegroup Northag) 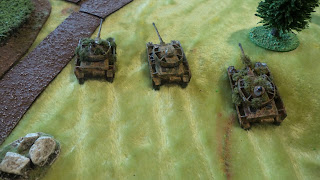 Steiner's excellent 15mm kit, which looks even better with the tracks that the Mark IVs make... 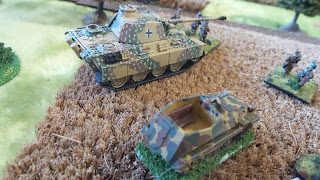 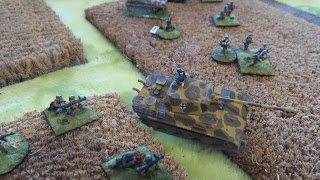 Panthers on the German left, ready to make a mess. 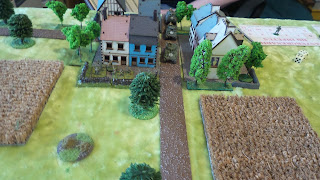 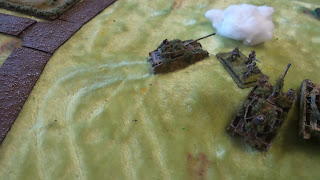 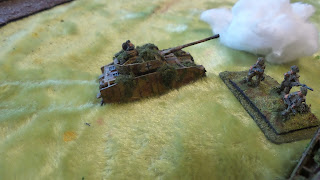 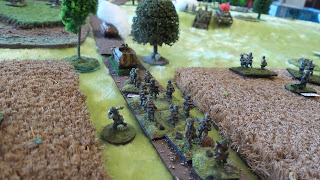 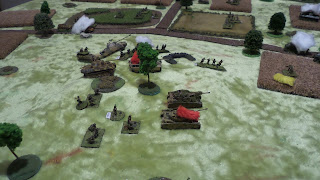 ...which slowed to a trickle across the high ground as they took considerable time to ensure that it was free of British defenders.