The call of Maurice is never far away. With discussion as to a suitable scenario, we resorted to the Fontenoy 1745 scenario in the rulebook, though using the 1690s figures that we have available.

We opted to use the National Characteristic cards ('a la baionette', 'steady lads' etc.), and the standard 4+ to hit (rather than 5+ which we had used previously due to presence of pikes and the prevalence of matchlocks over flintlocks).

This certainly put a different spin on the gameplay.

Again, a fine and exciting game, with twists and turns and periods where, due to command attention (cards) being focused elsewhere, troops might sit without moving, or flanks might be held simply by the imposing presence of elite cavalry.

Each game is a new experience with these rules, yet, each game also offers a unique insight into battlefield management in the horse and musket era. You simply can't do everything that you want to do and half of your time is spent 'fighting fires' which threaten the flank or weaken your centre, while you try to gain victory.

There are times when it pays to do nothing, other than simply roll for musket fire in the centre, while you sneakily gather resource and cards to enable a flank attack with your cavalry, even while your opponent (who may be stronger on the opposing flank) has to focus on your breakthroughs and thus leave more powerful forces sitting doing nothing. This is the stuff of period battlefield accounts.

Very intuitive, fast flowing and seems to echo (as much as gameplay can) our perception of the period. 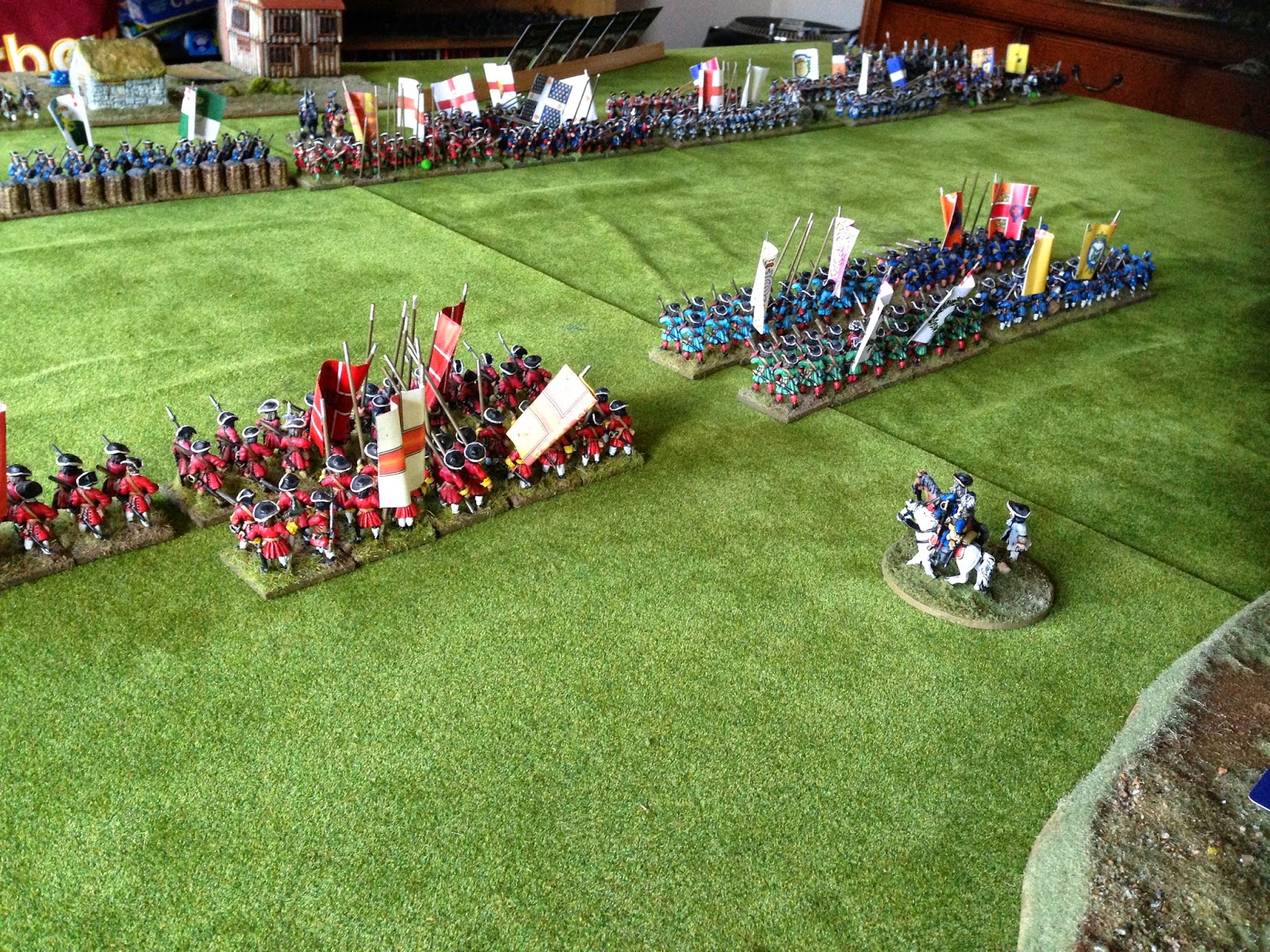 The Allied right flank. A mass of French elite cavalry waits to do some damage. 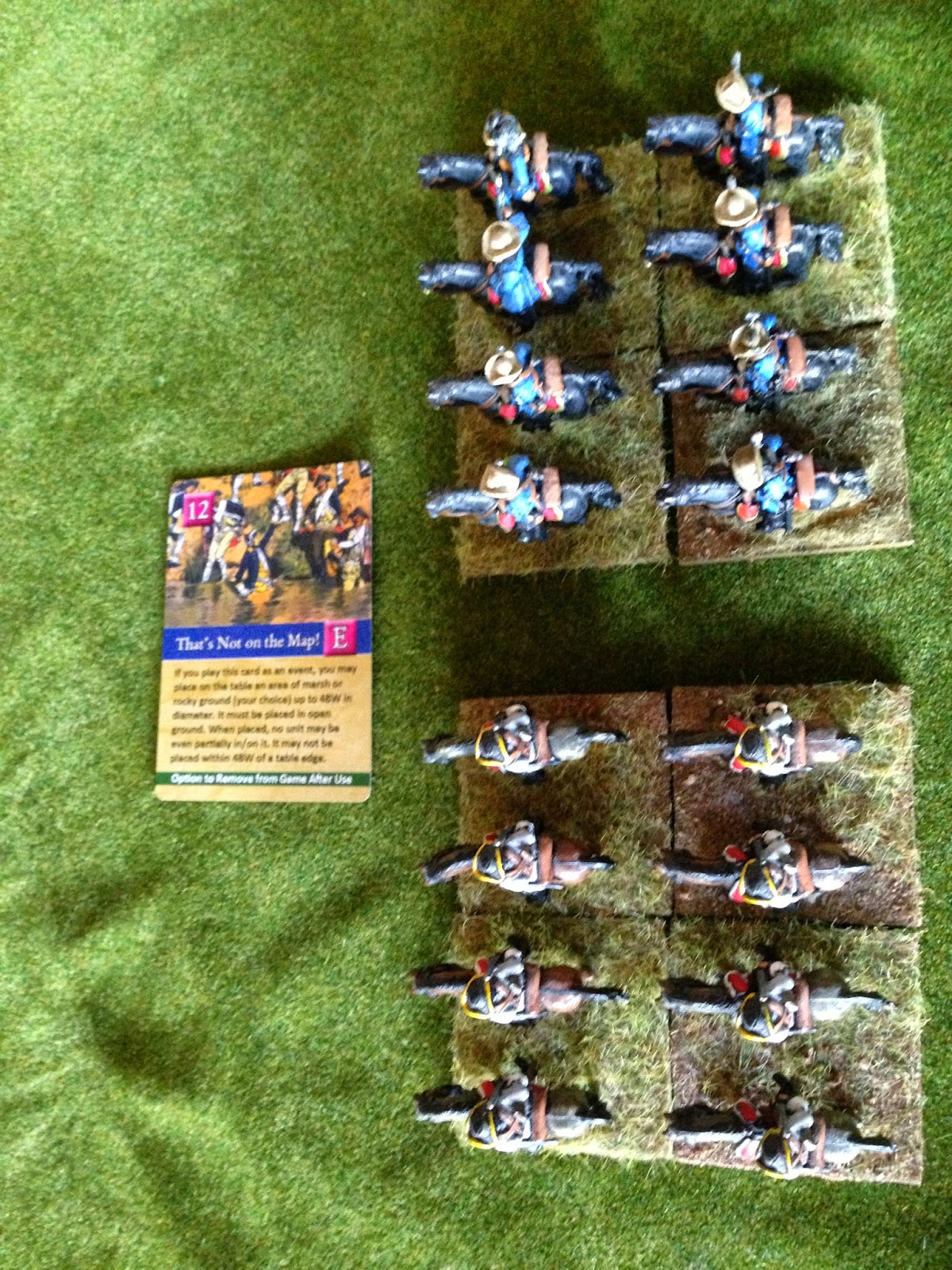 Allied cavalry's early maneuvering is halted through some marshy ground which wasn't on the damned map. 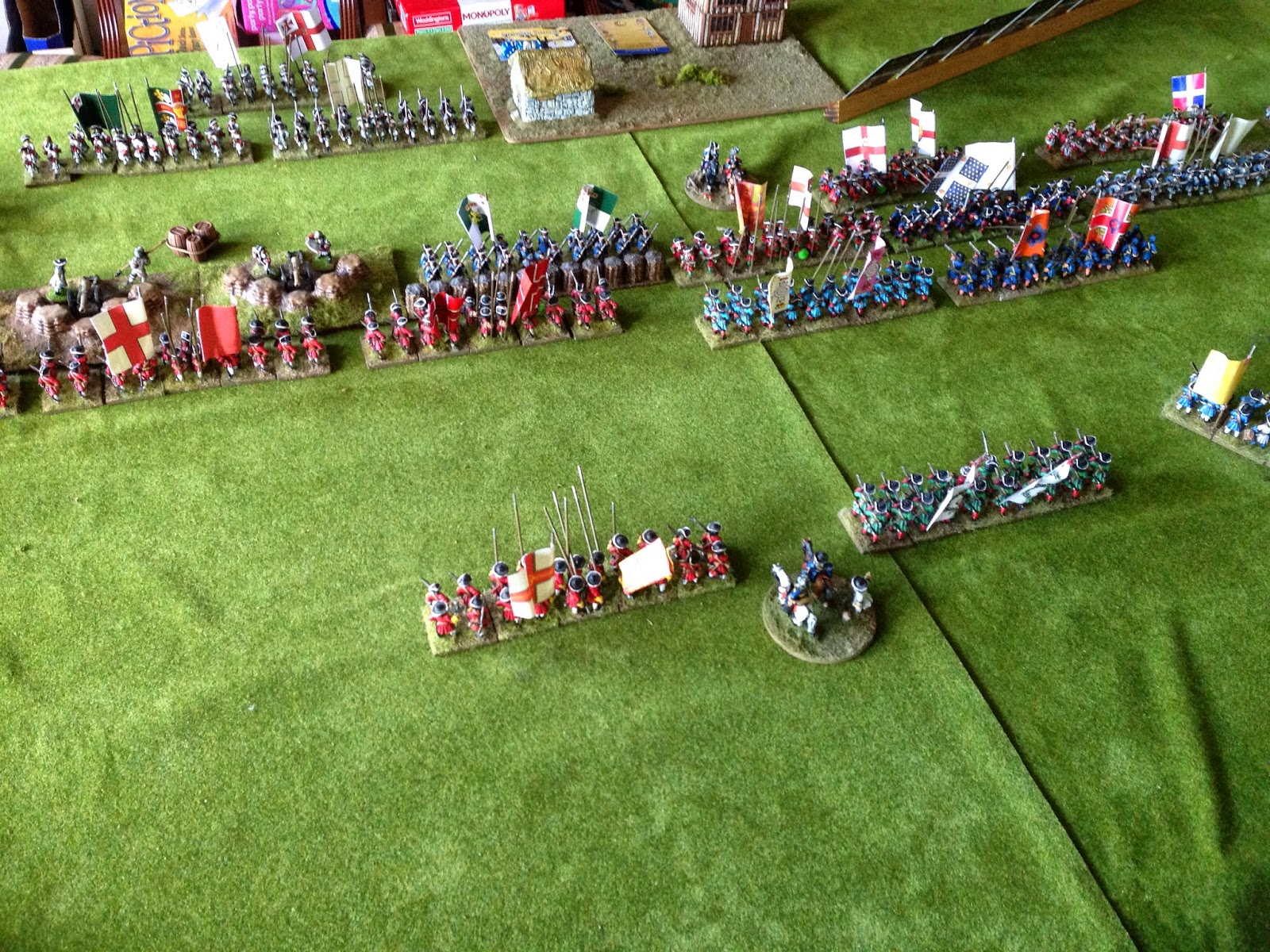 The Allied assault on the centre. 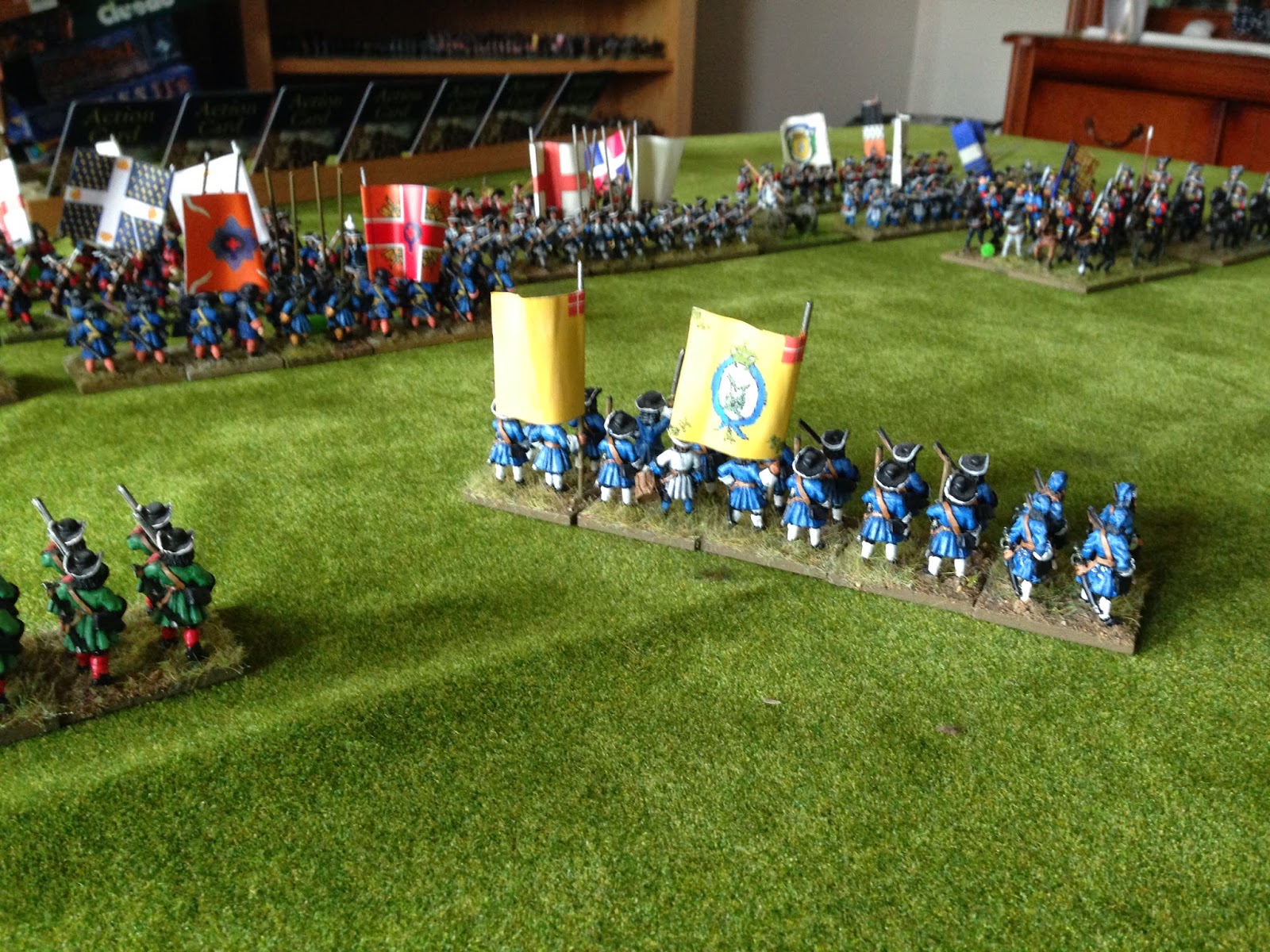 ...as flanks are refused in order to keep an eye on French cavalry. 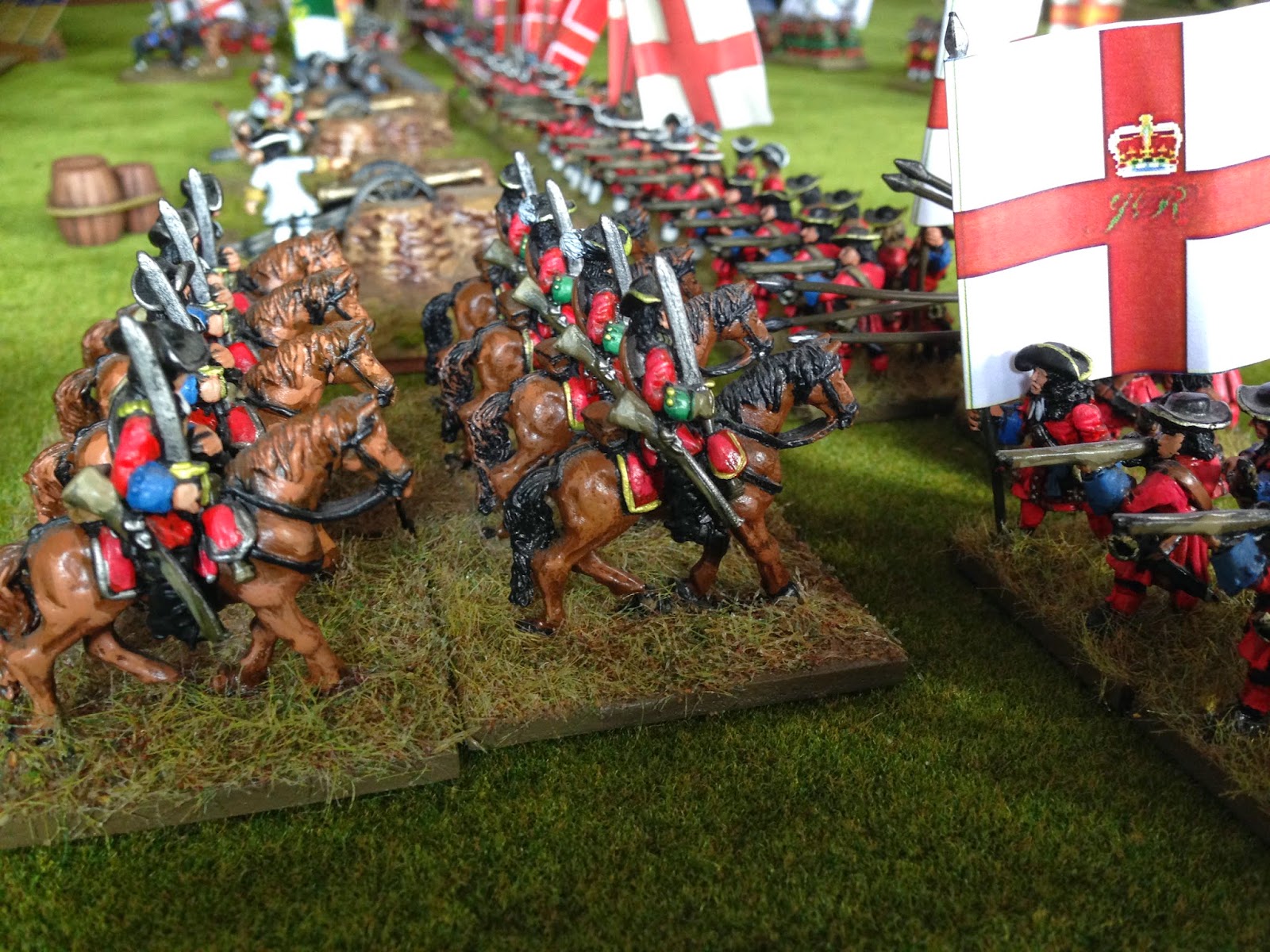 On the allied left however, English infantry is making headway, as weakened French cavalry is stalled by musket fire. 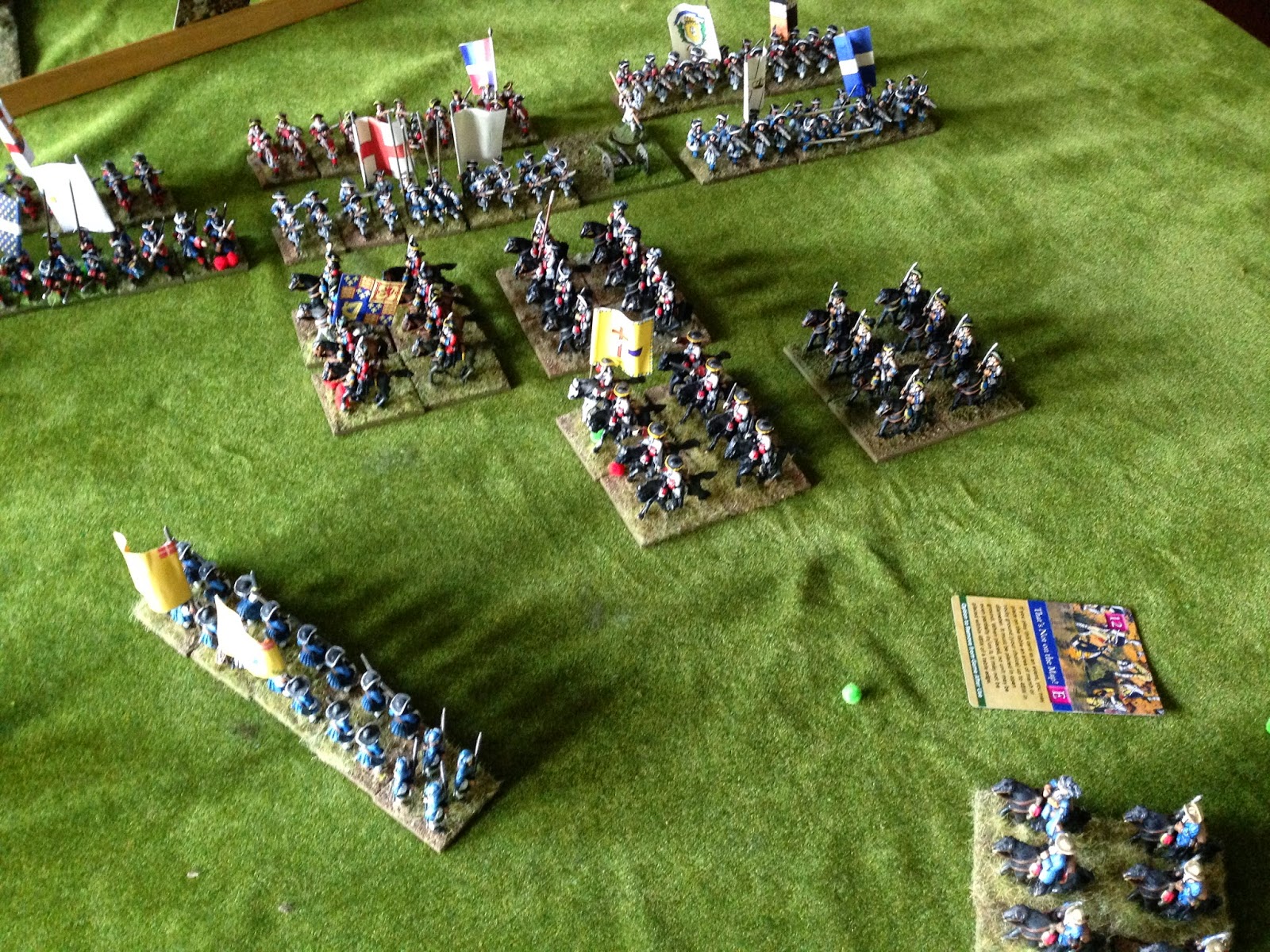 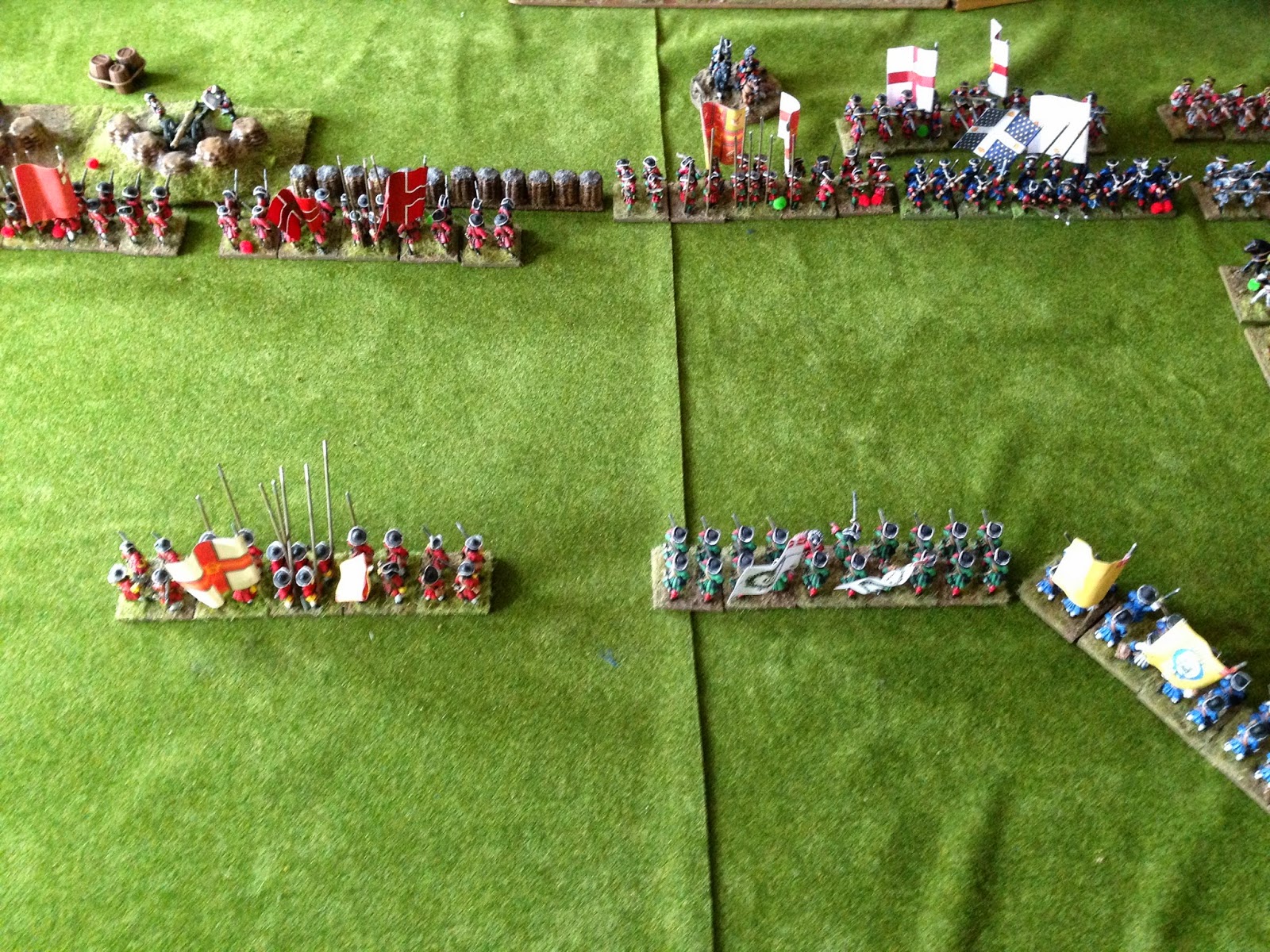 French cavalry goes in on the Allied right, routing the Dutch Guards, and forcing defensive measures. 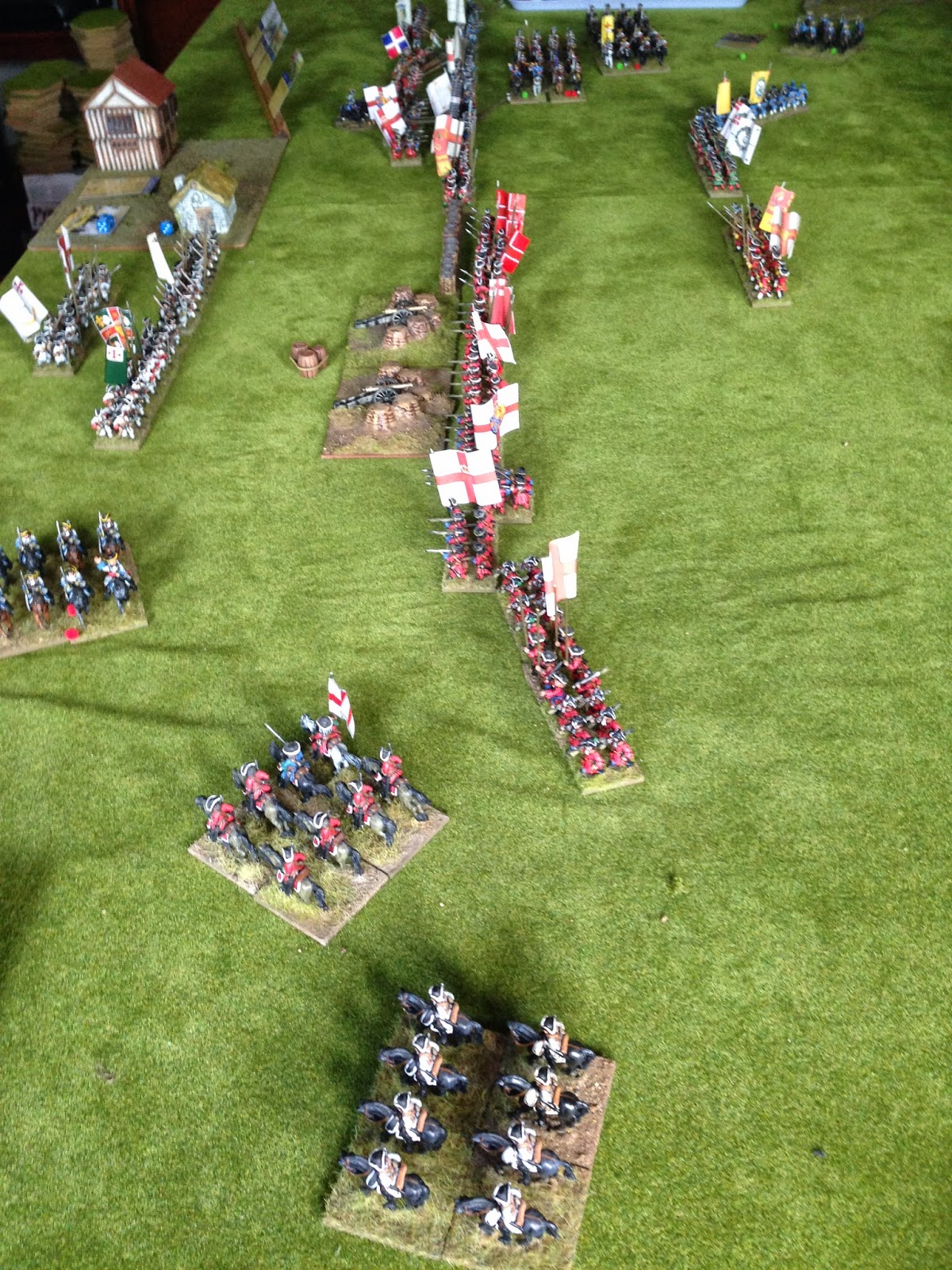 View from the Allied left...mid game 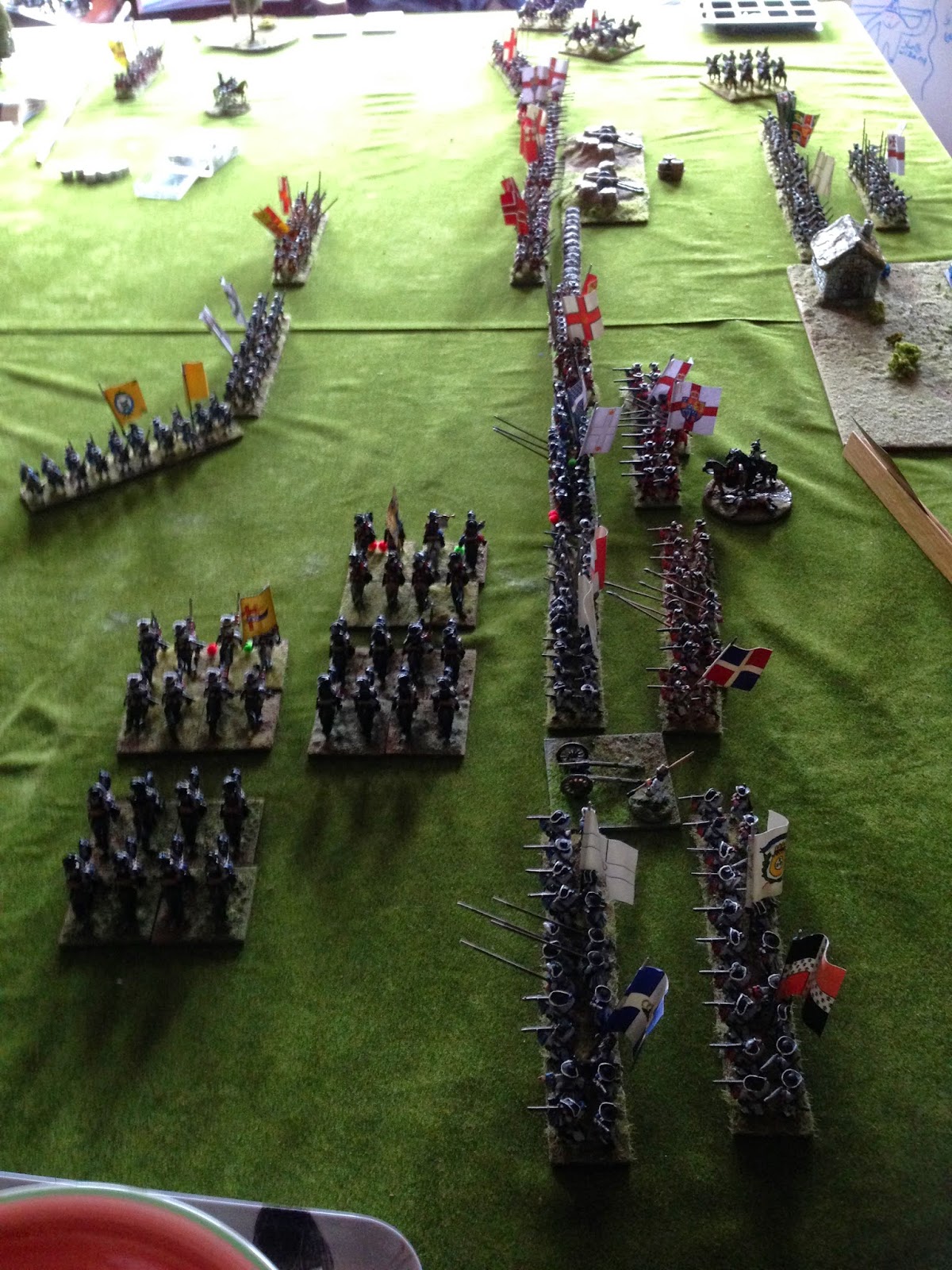 ...and the Allied right 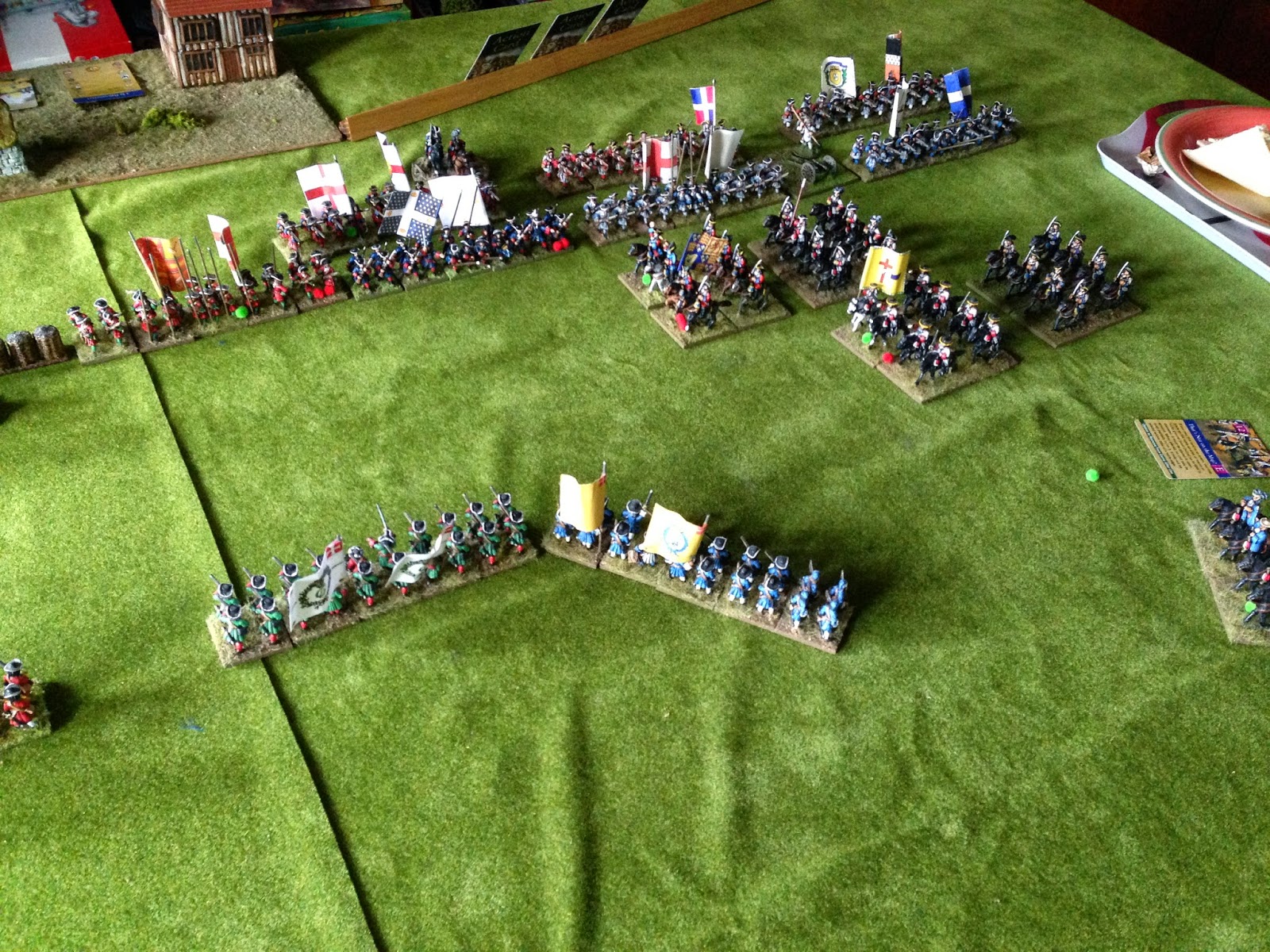 A refused flank however, 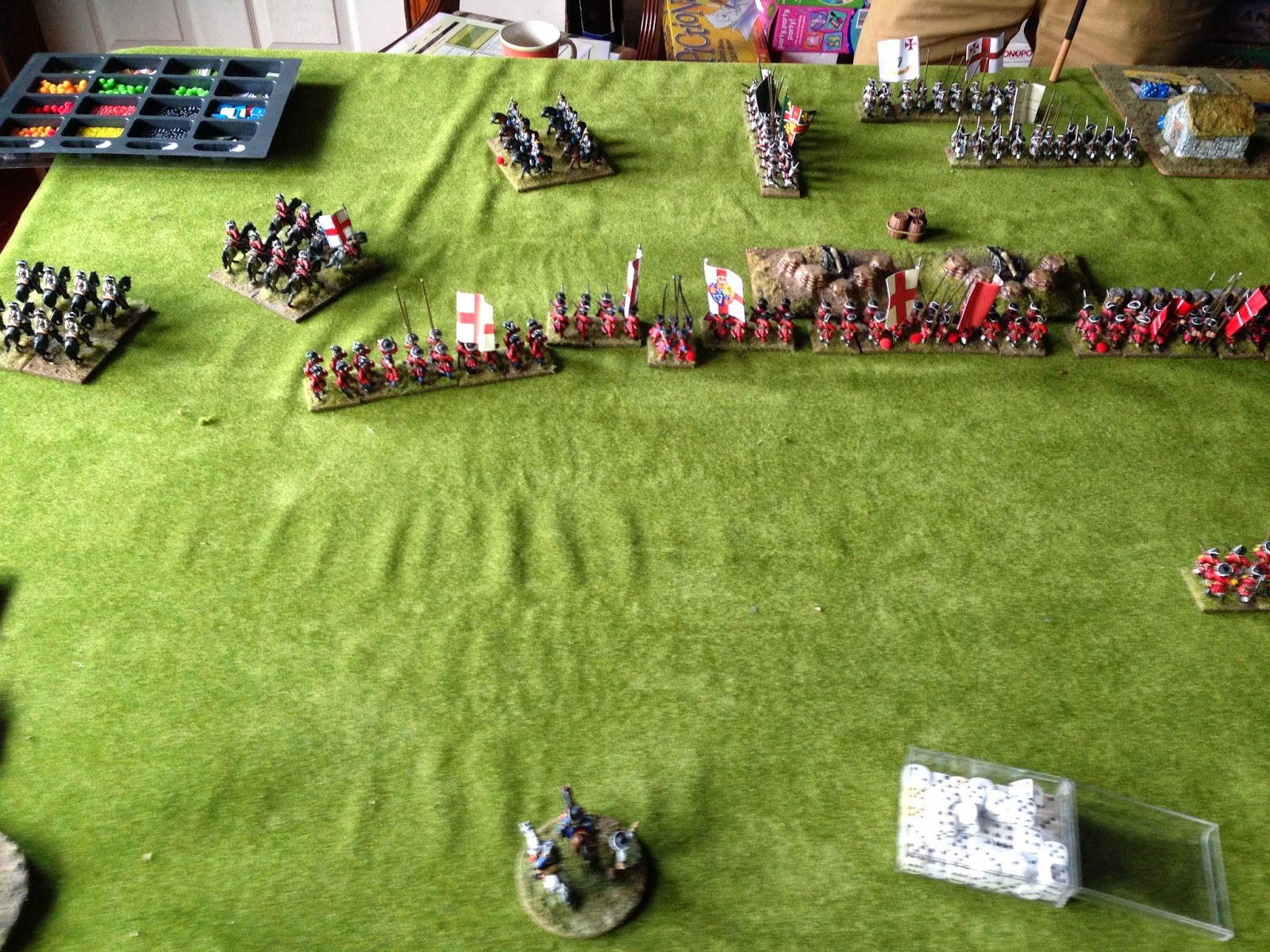 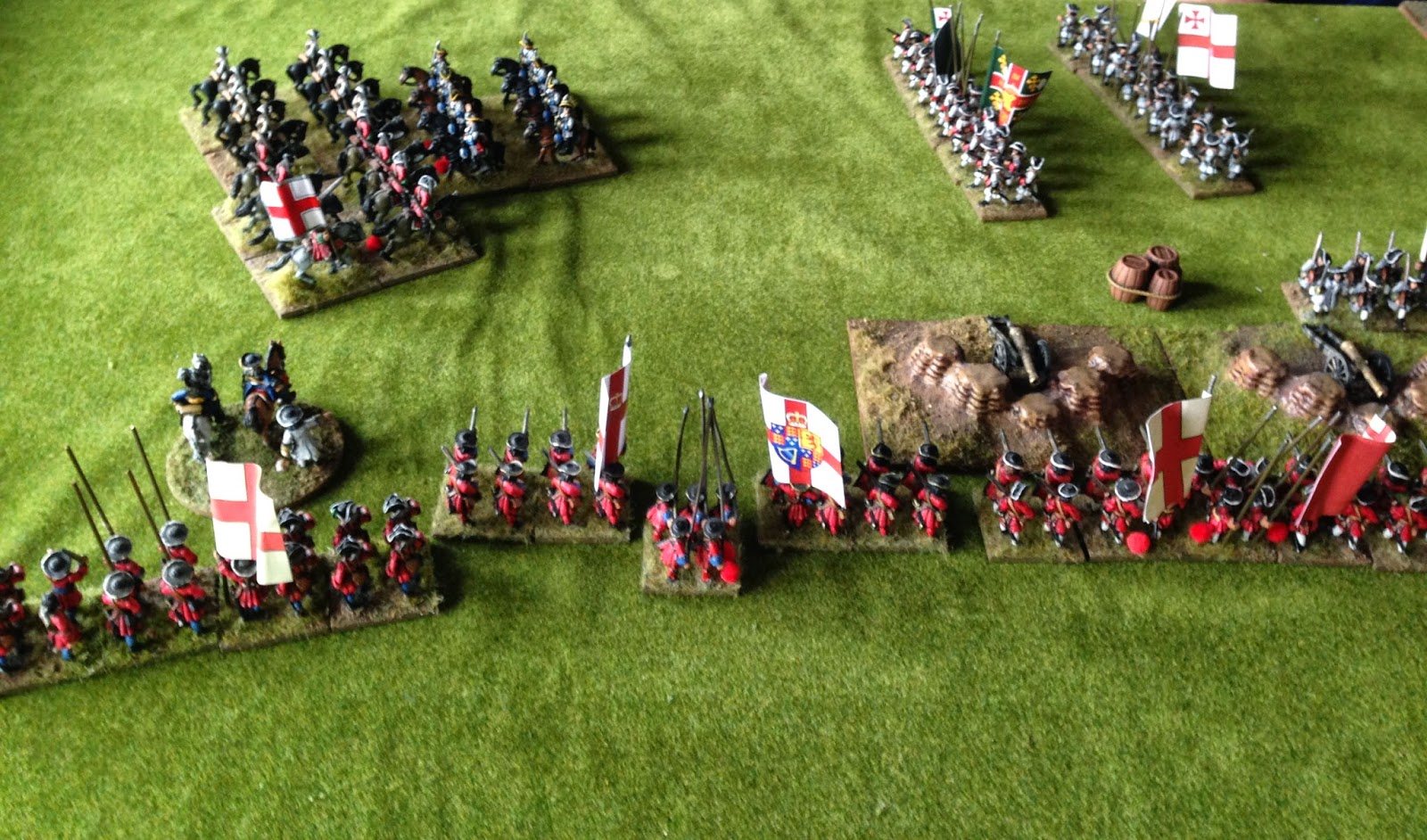 ...is countered by headway on the Allied left, where a cavalry breakthrough and rout of French infantry has changed the face of the battle. 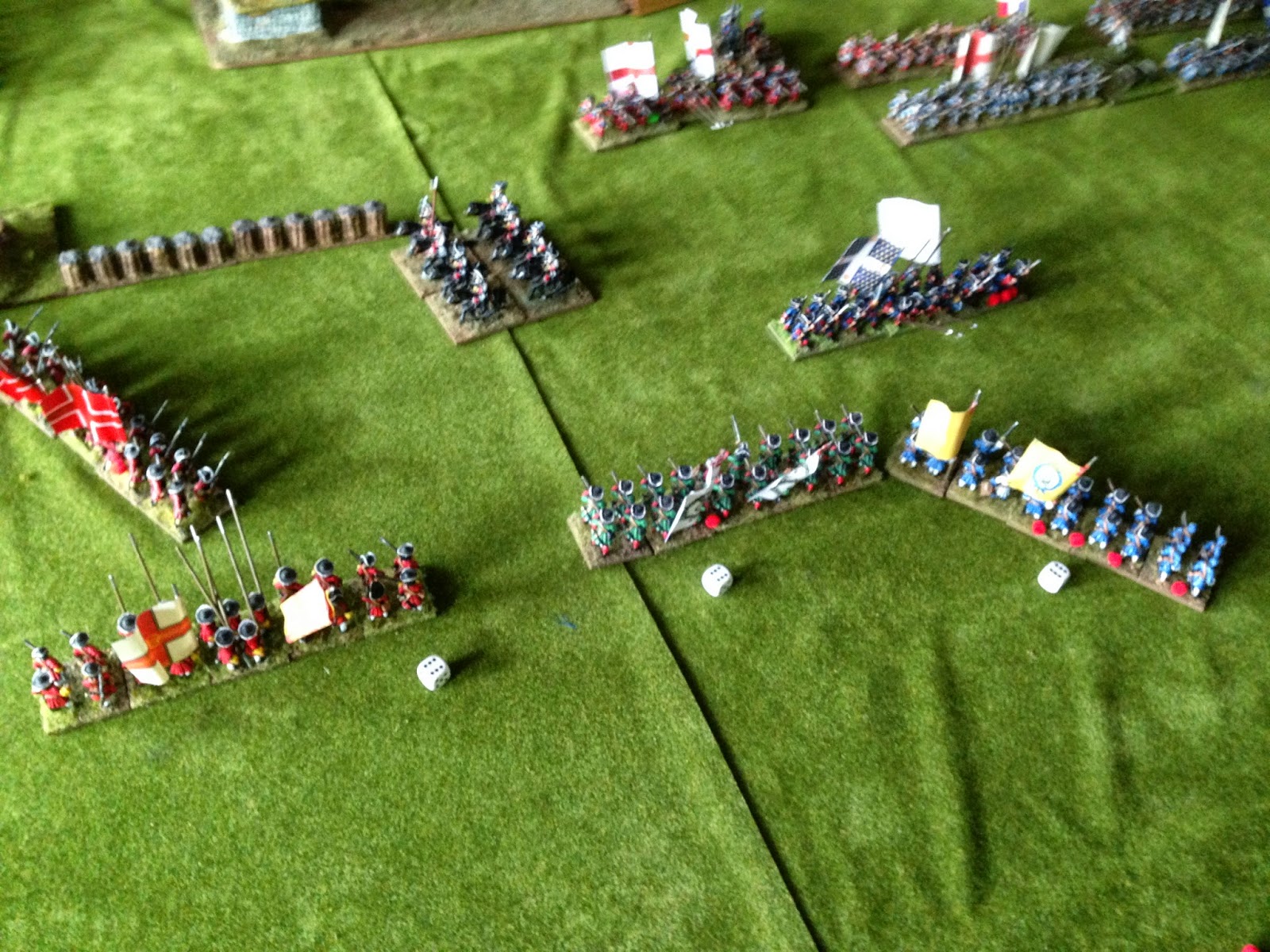 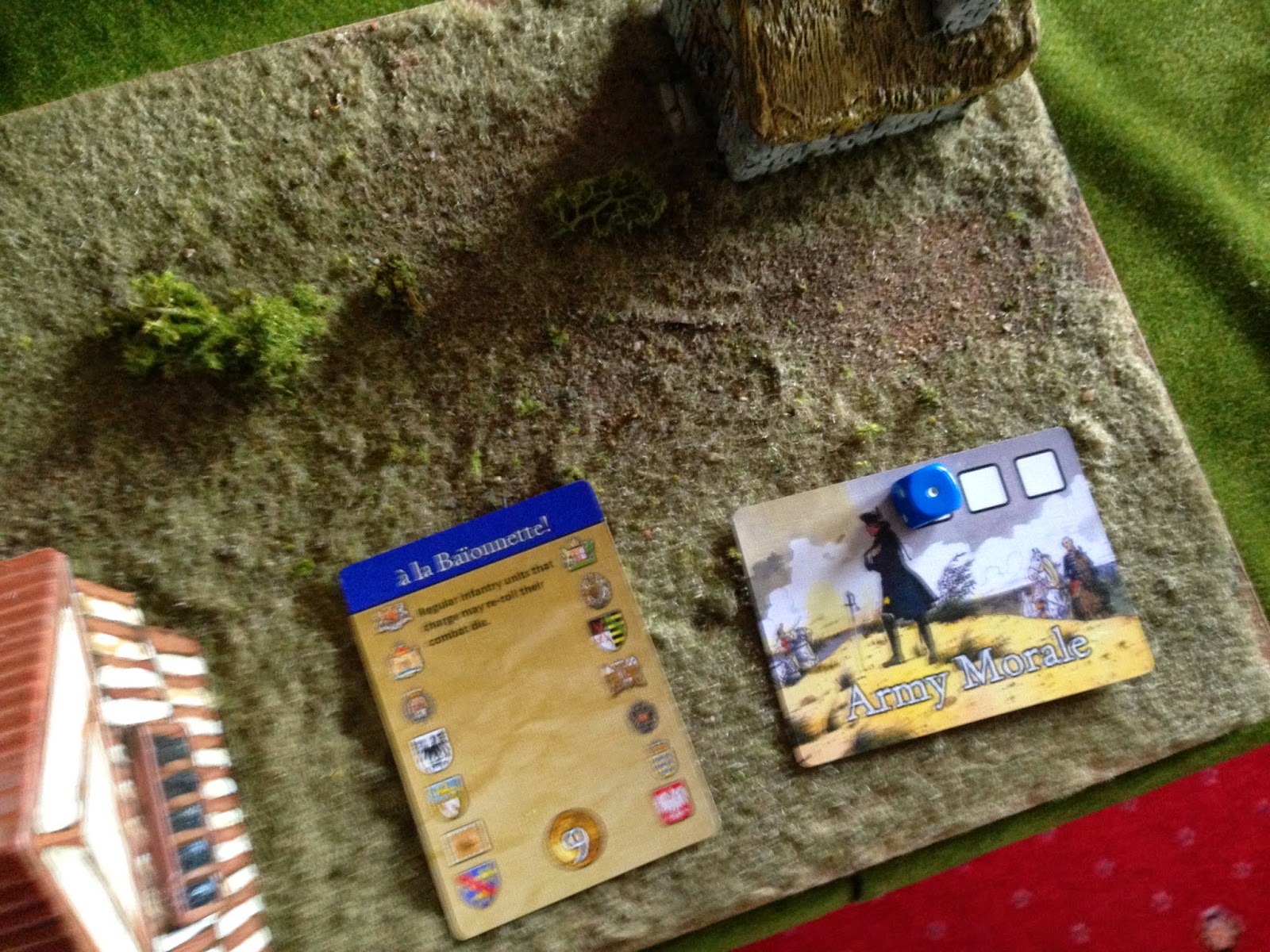 Mounting pressure and severe effects on morale with bad dice rolls after losing units, forces the French to withdraw and gives the allies a victory.


A fast flowing, tense and evocative game in less than 3 hours. You have to love these rules.
Posted by Duc de Gobin at 12:17 No comments:

Email ThisBlogThis!Share to TwitterShare to FacebookShare to Pinterest
Labels: Maurice

What a piece of junk! (or...Han Solo was right) 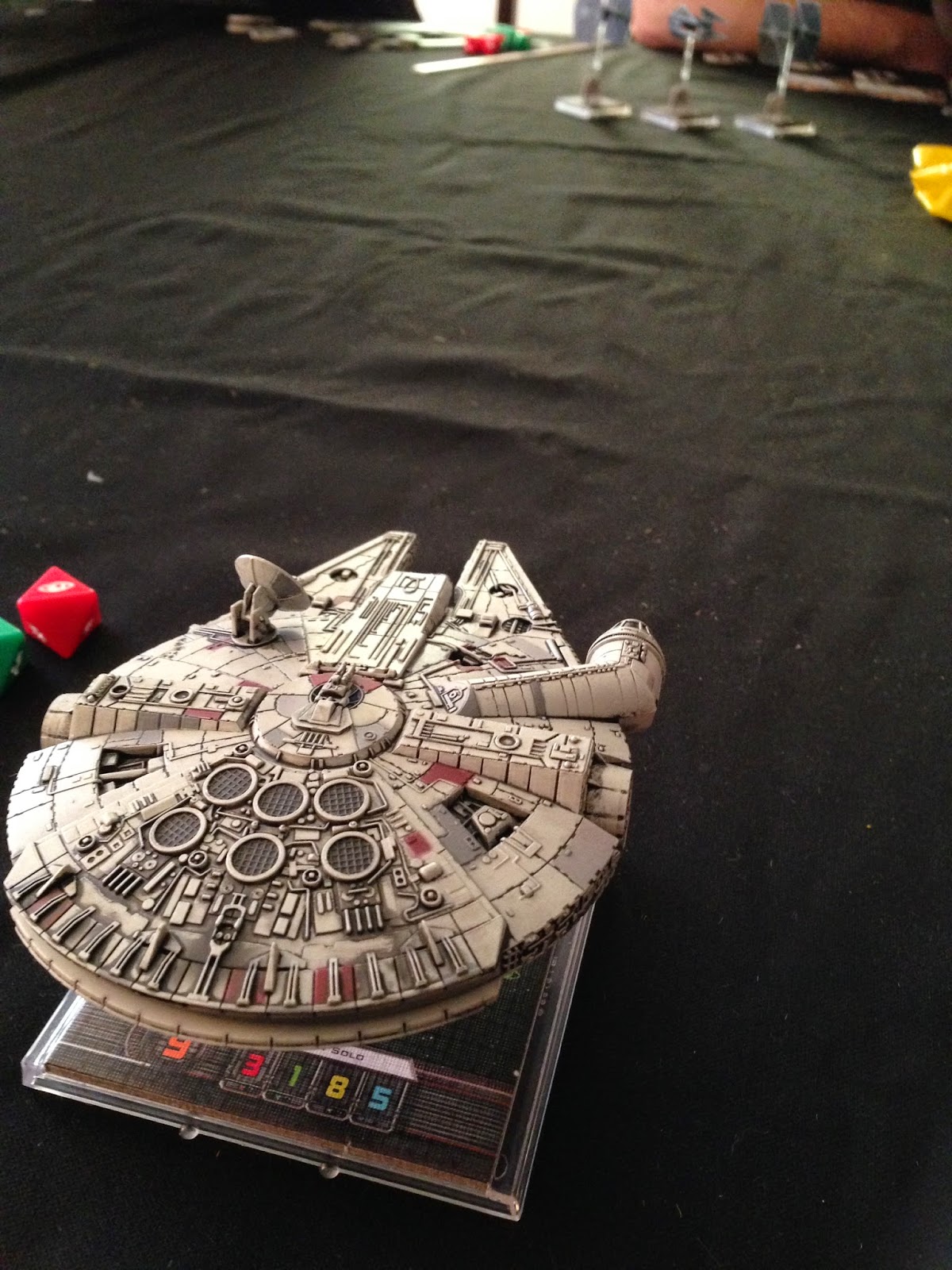 Now here, we see the introduction of the tramp freighter otherwise known as the Millenium Falcon. Crappy defence but lots of 360 degree attacks.


There seem to be two options.

a) Fly straight at the enemy TIE fighters 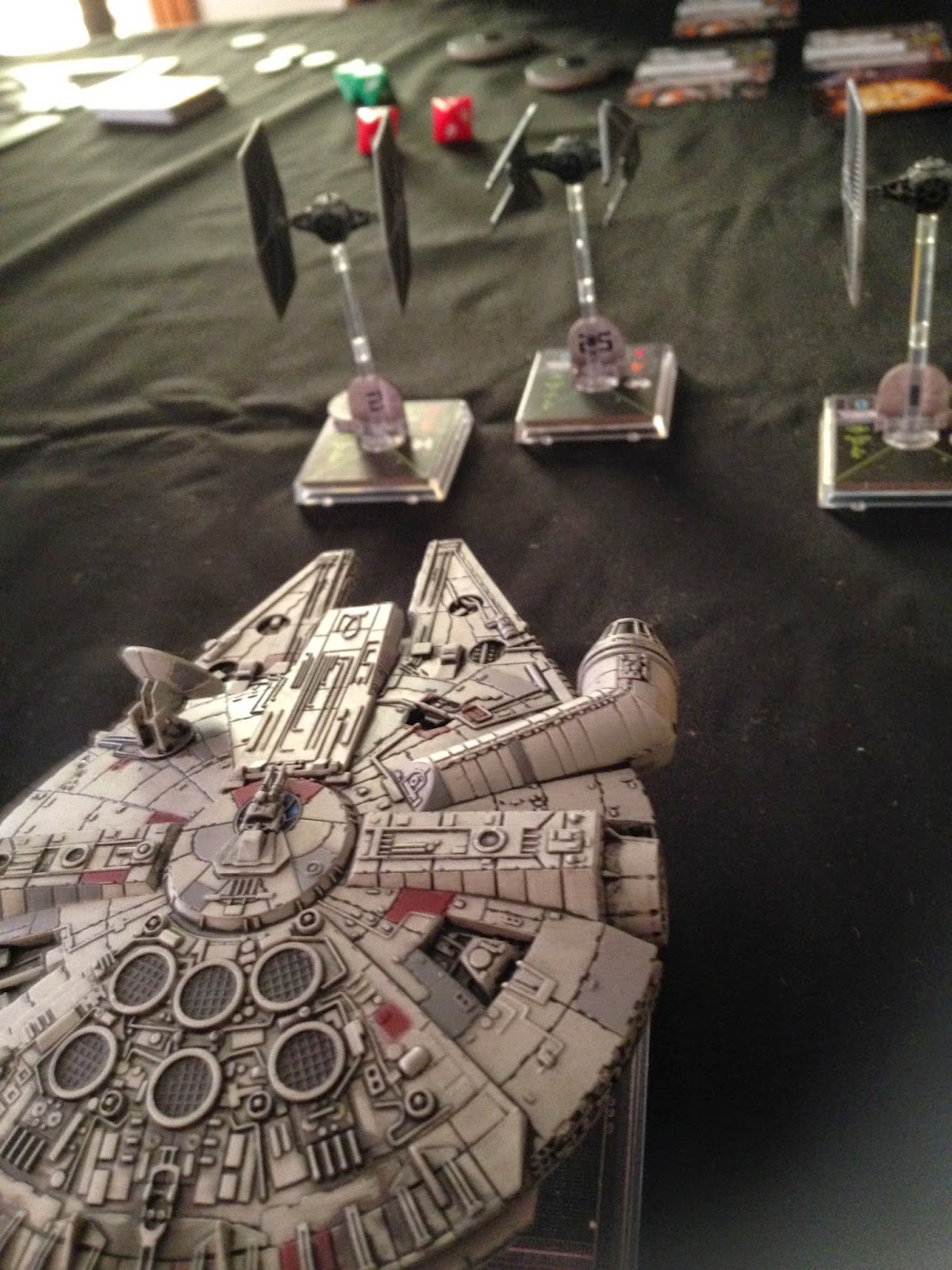 b) ...while the X-Wings do the same (see the 'speed blurs' for the TIES in this pic - I meant to do that of course) 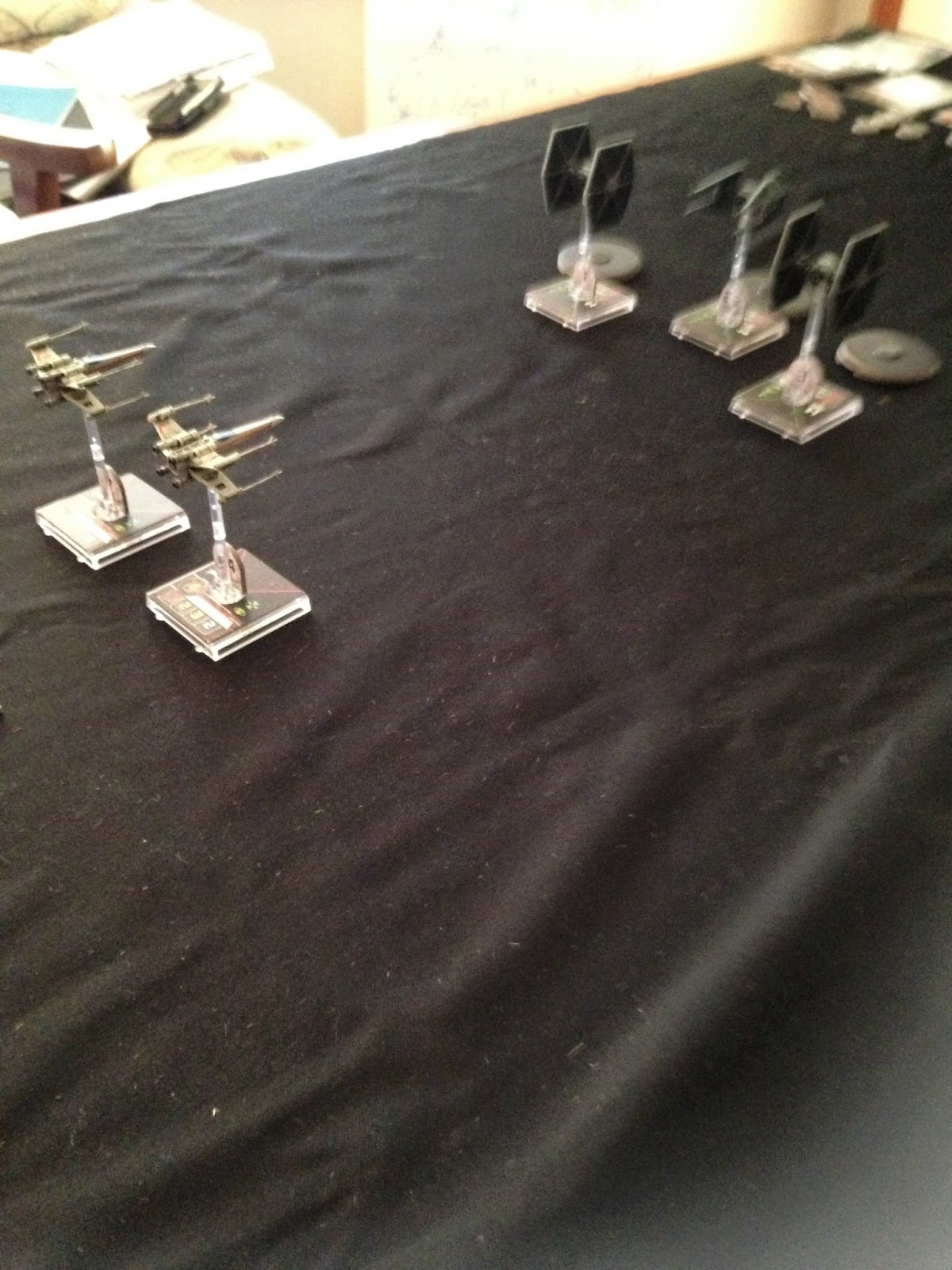 c) Get swarmed and die 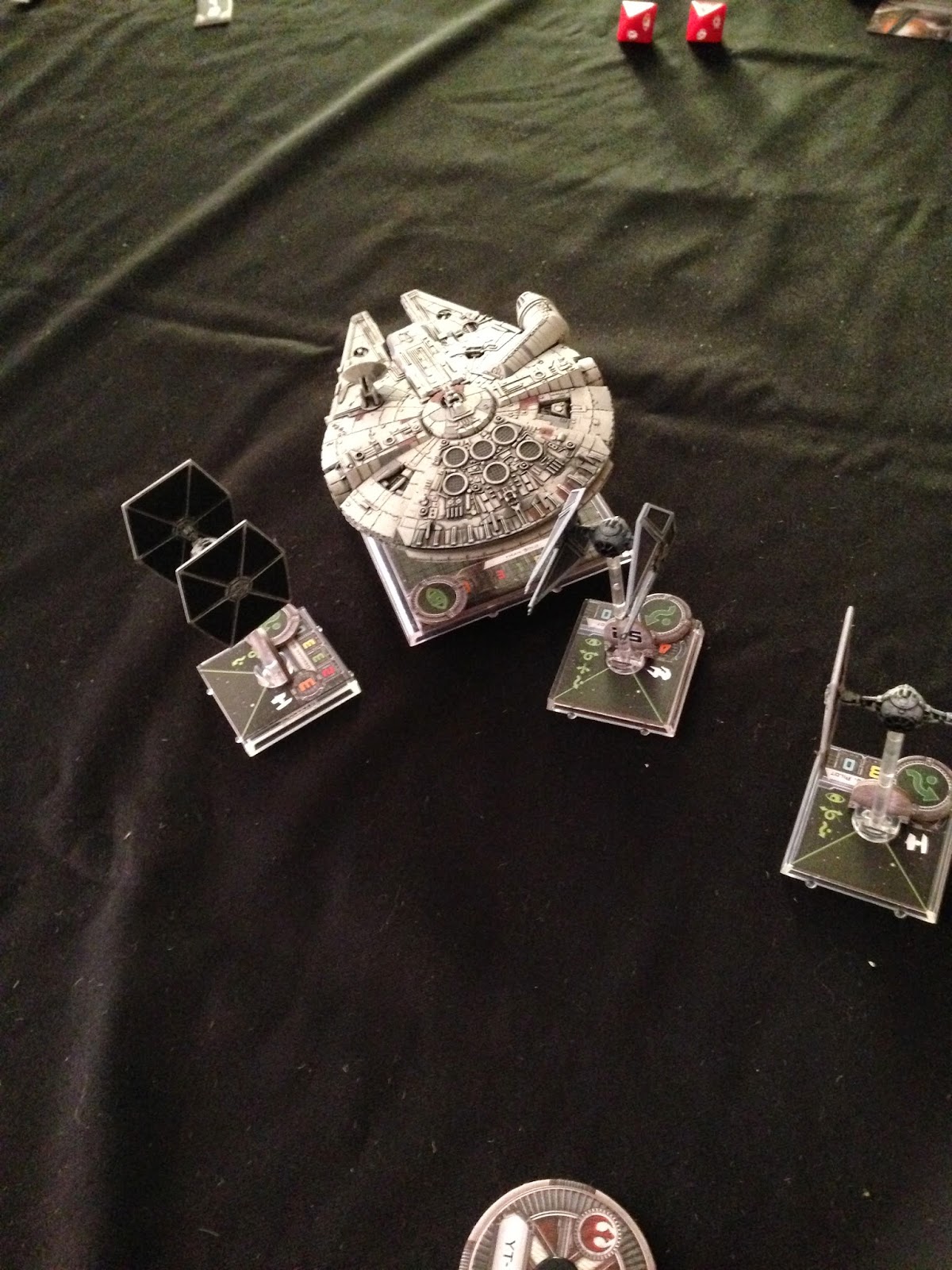 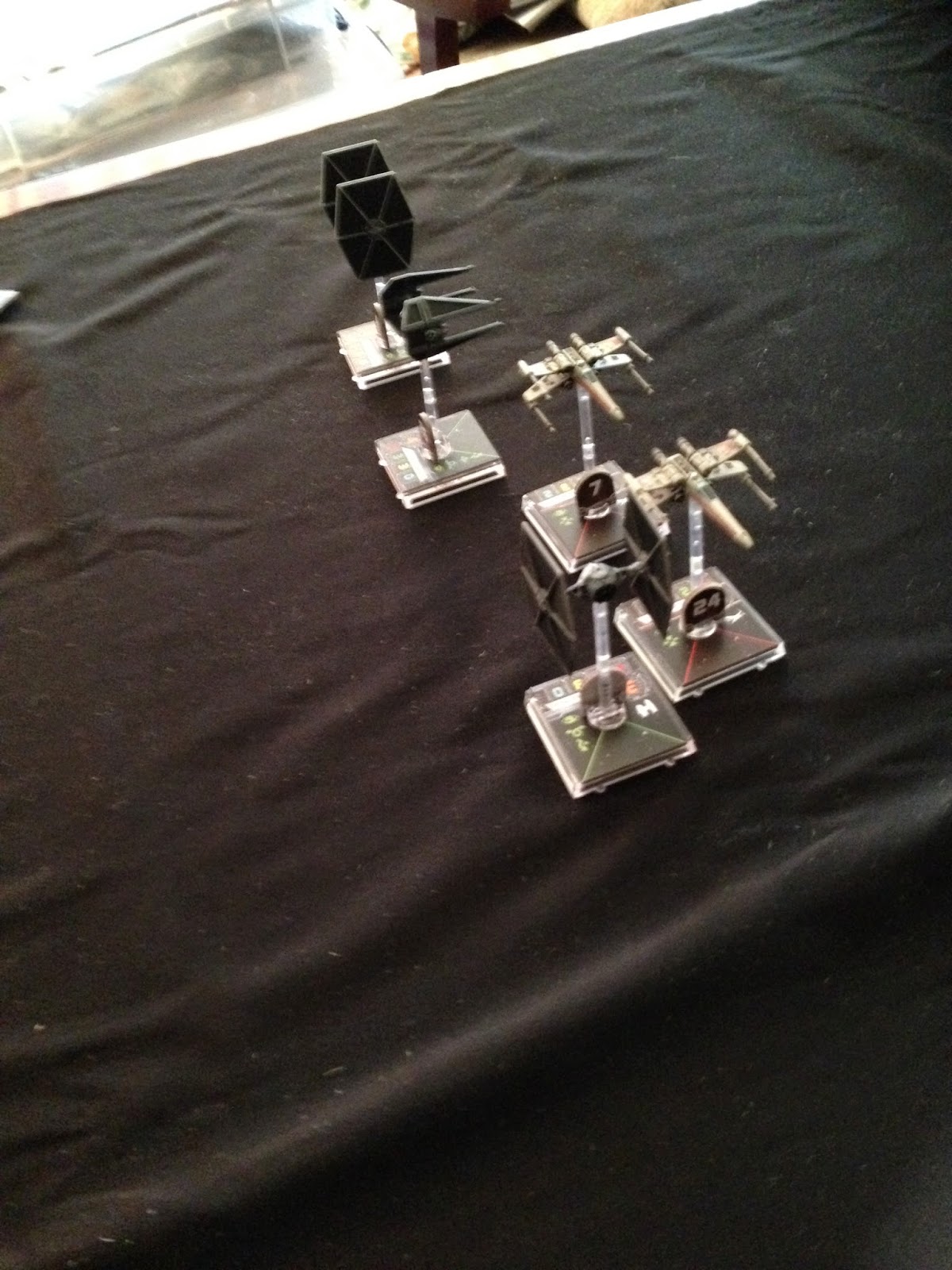 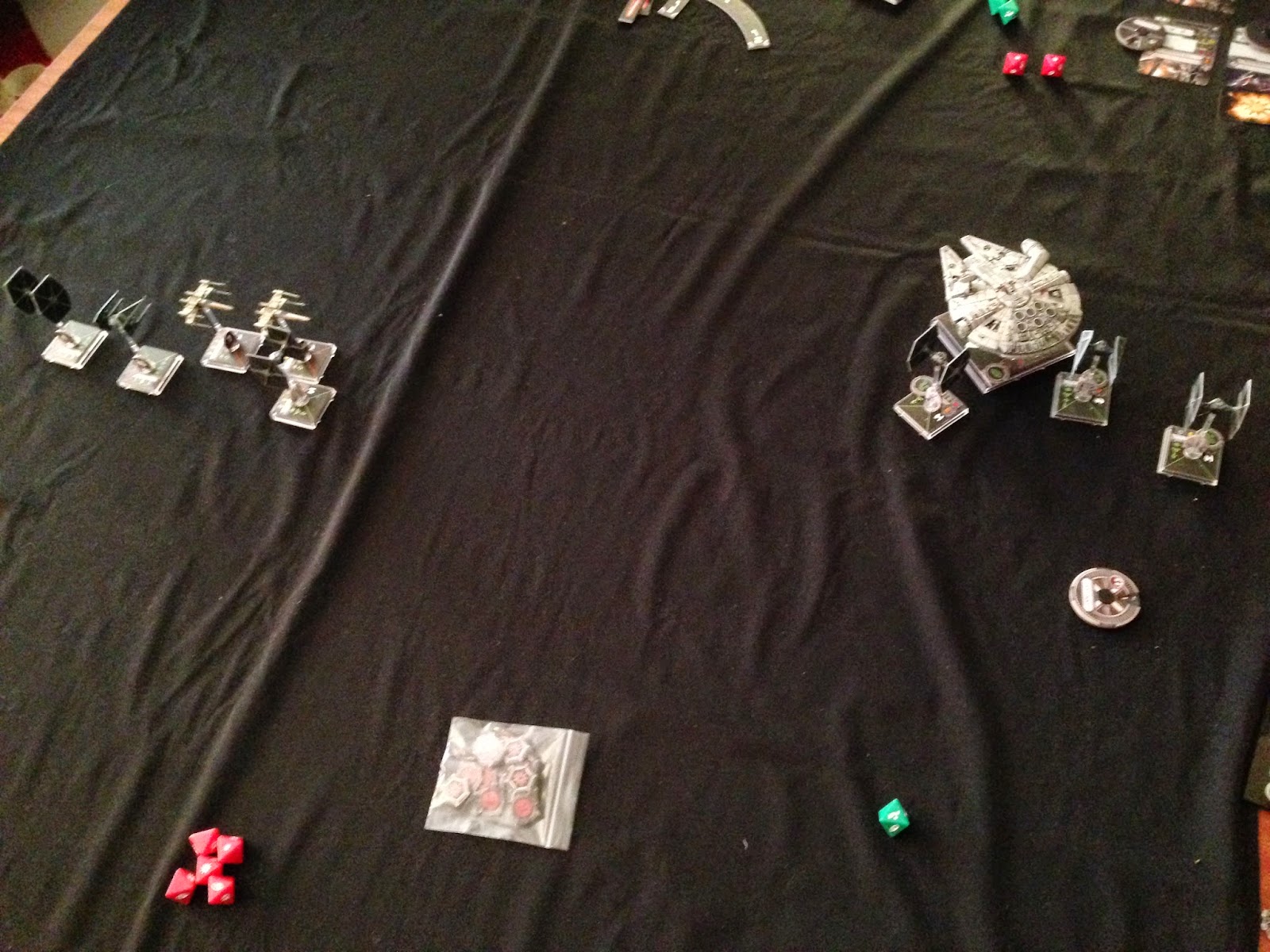 d) sit beside the coffee in the 'graveyard of ships) 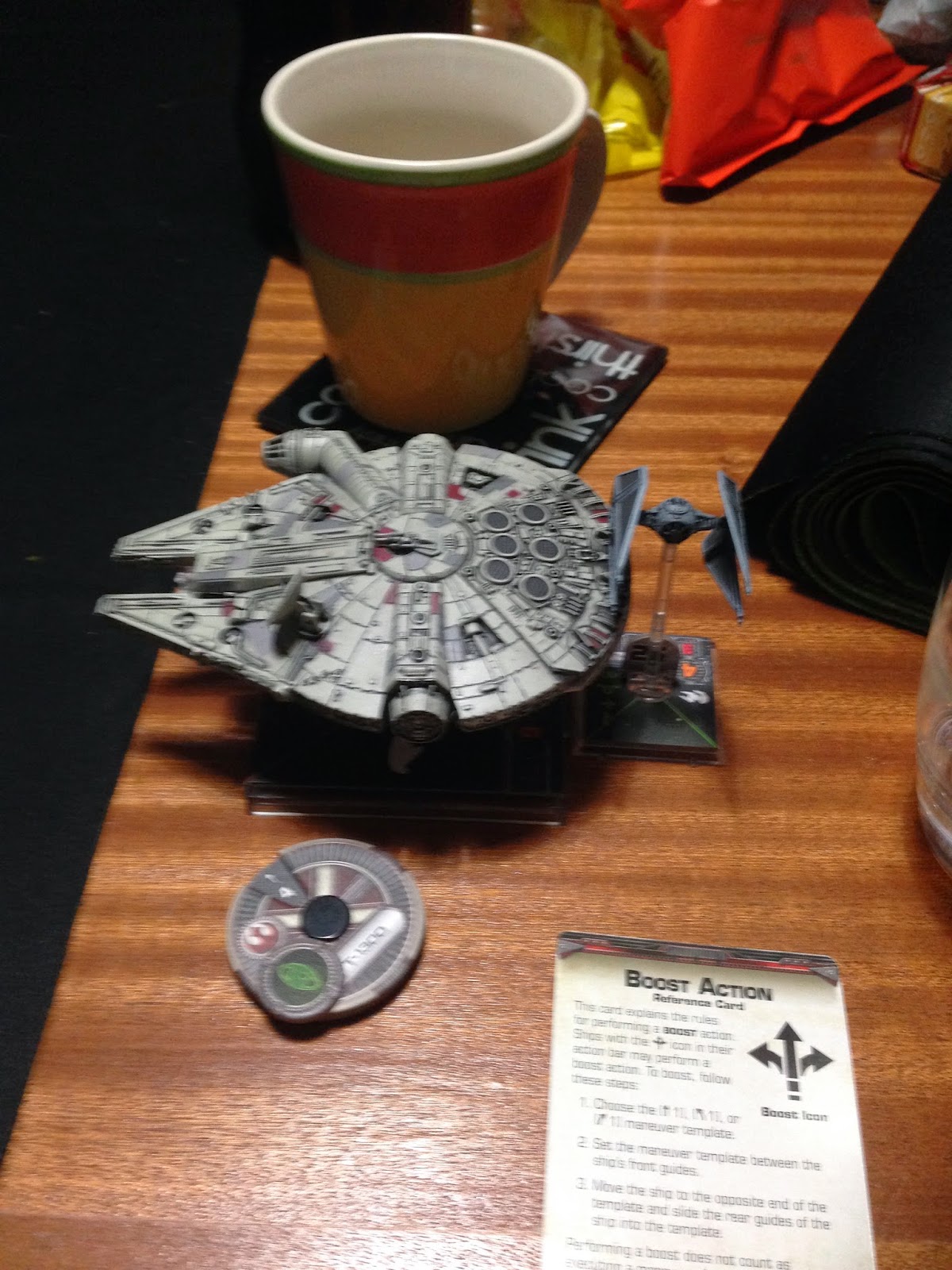 Now the key here is to do what Han Solo did...


a) Sort of pretend to get involved 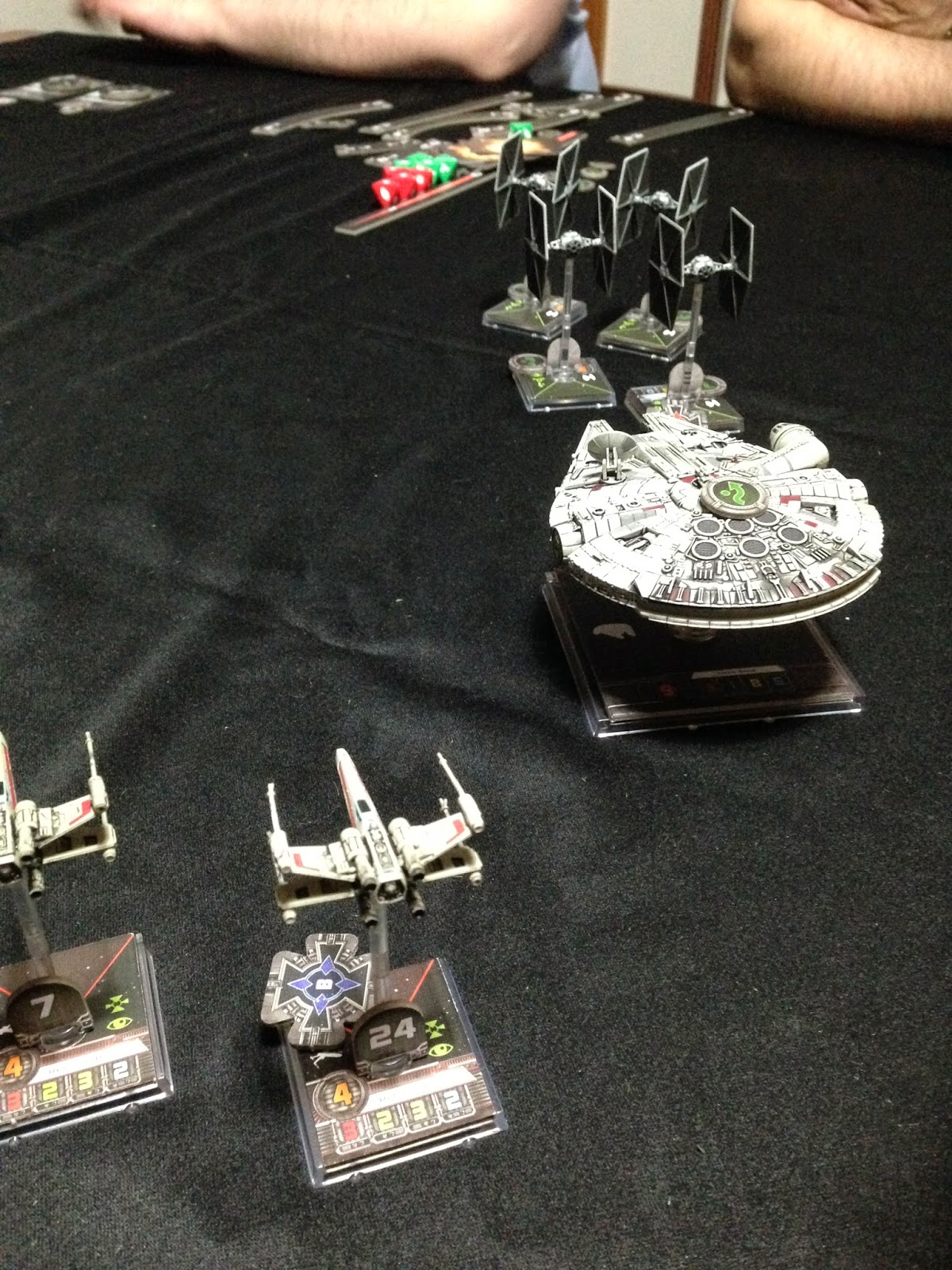 b) Fly away..far away and say things like...'I'm not getting involved in your pesky (and particularly well financed...have I mentioned this before?) rebellion. Fly around the periphery a lot and take the odd long range shot. 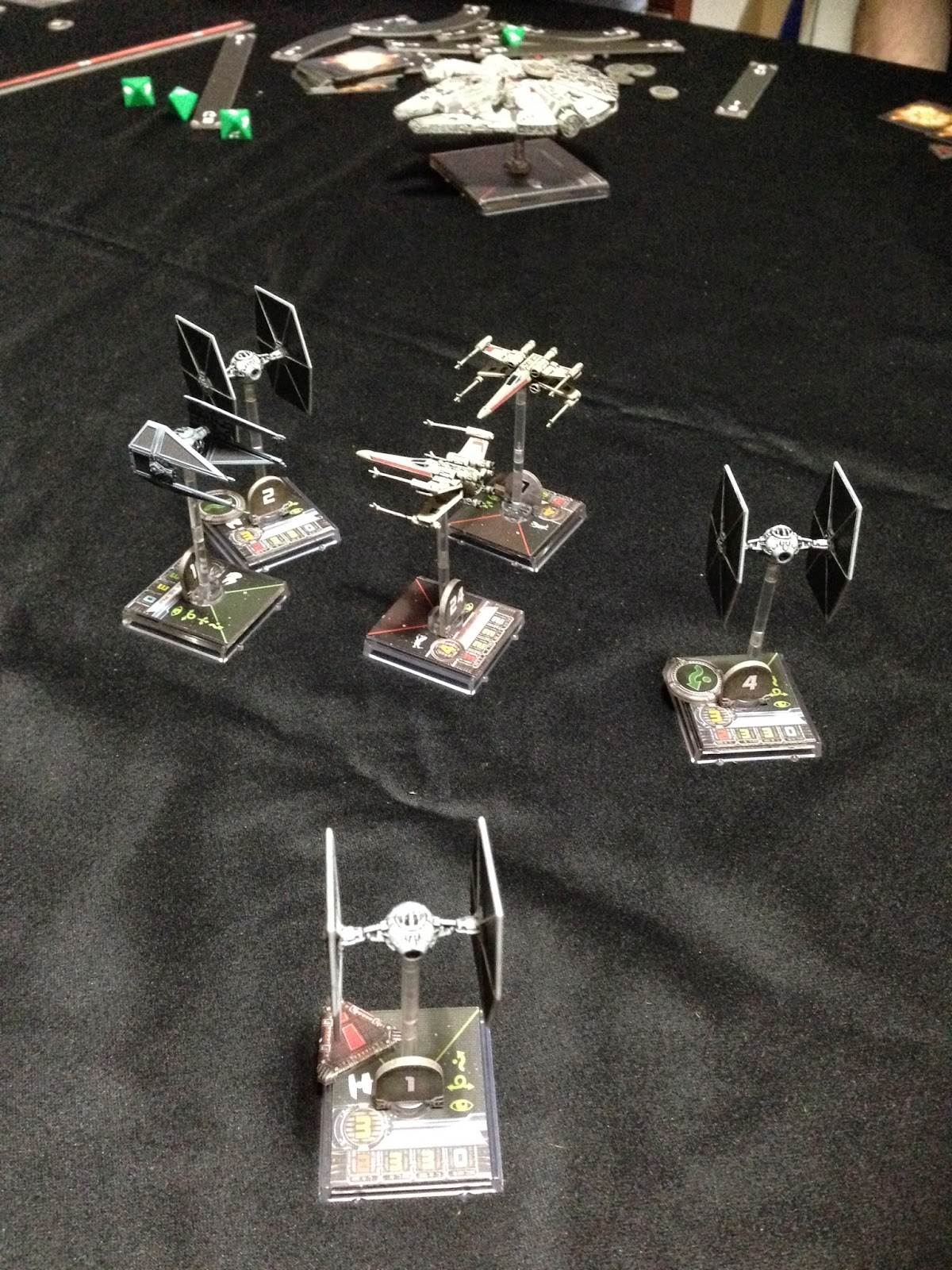 c) Then return as the all conquering hero to mop up, when there's a single X-Wing left and you have so many shields and hits that you are the equivalent of an M1 Abrams... 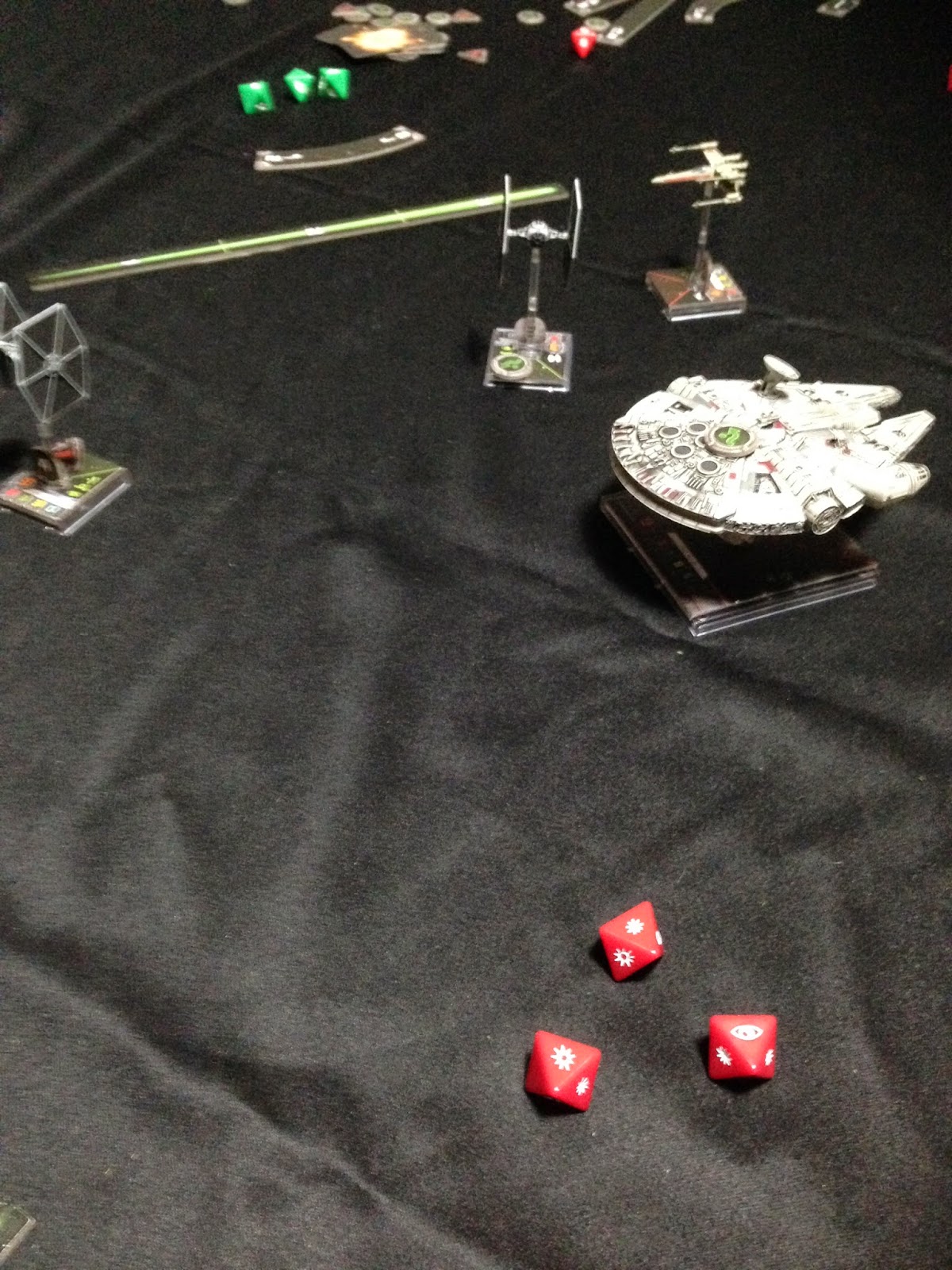 See? Exactly what Han Solo did during the Death Star attack. Let everybody else kill themselves and then just turn up out of nowhere and say 'you're all clear kid. Let's blow this thing so we can all go home!' (Did he really say that? Isn't that kind of...never mind...)