I’ve been looking at Newtownbutler in 1689 as the first battle with 'Maurice' rules. Late seventeeth century (nine years war) has to be one of my favourite periods despite its relative unpopularity  in terms of ‘in vogue’ wargaming. The Irish battles in particular are very interesting, so expect the Boyne and Aughrim to follow. We’ll also be looking at these in terms of ‘Black Powder’ and of course ‘Beneath the Lily Banners’ by the League of Augsberg gents.

Many would argue that the Boyne or even Augrhim was the real turning point of the Irish war in 1690 and 91 respectively. However, prior to the battle at Newtownbutler in July 1689, the Protestant descendents of the original plantation settlers had seen the army purged and restyled by Tyrconnel, in a Jacobite mould, apparently with the blessing of James II (on the throne since 1685 and determined to improve the lot of his Catholic subjects).

With a protracted siege at Londonderry, with most of the Jacobite army tied up in the north, the town of Enniskillen would be a base for raids, skirmishes and a general thorn in the side of the disorganised but large Jacobite army.

The Jacobites themselves had few capable generals, but amongst those they did have were Justin MacCarthy (recently made Lord Mountcashel) and Anthony Hamilton (brother to Richard Hamilton who commanded at the siege). Both had fought in France. MacCarthy especially was a gifted leader.

Under orders to end the Enniskillen threat once and for all, Mountcashel with a force of 4,000 (or so - see the books below) would meet the Enniskilleners (Commanded by William Wolseley – newly arrived by ship with Percy Kirke to help relieve Derry) at Newtownbutler – sixteen miles from Enniskillen.

In essence, the battle was little more than a large skirmish in the scheme of things and when compared with later battles. Before the battle however, the Enniskilleners were nothing more than raiders. After it, they would be seen as a force to be reckoned with and Lord Mountcashel would be captured and held in Enniskillen (at least until his later escape). One could argue that this relatively small affair, when seen in context with the siege at Londonderry, was the turning point in terms of the height of Jacobite power in Ireland.

The buildup, battle and aftermath can be found in these two excellent books by Graham. 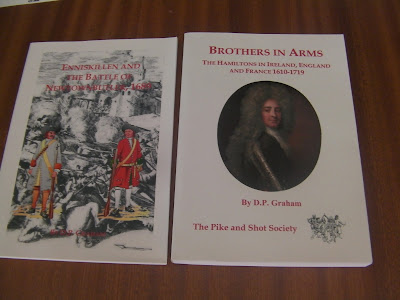 Some leadership elements shown in pic. These were originally supposed to be William IV, The Duke of Berwick (James Fitzjames – bastard son of James II and the only man to have defeated the Enniskilleners in open battle (skirmish!) at that time at Cornegrade Castle) and Schomberg. These were being done for a Boyne game – but they’ll substitute for Mountcashel and Wolseley for the Newtownbutler scenario. 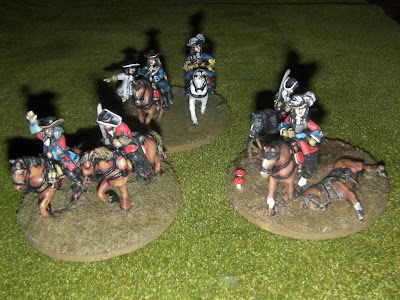 (Evening shadows or crap photo - can't decide which.  Warhammer style toadstools courtesy of 'da bruvaz' - you know who you are... I'm not sure whether such toadstools grew in Ireland in 1689, but they look nice. Yes, yes - the historical accuracy button-counters will be on my case now, I know.)

Hoping to get this game done soon. OOB to follow.
Posted by Duc de Gobin at 09:50 2 comments: