Using the research and OOBs from the books mentioned in the previous post, I've constructed two forces for the game:

Justin MacCarthy, the newly made Lord Mountcashel, was a very experienced soldier having served in England before the Popish Plot, France with the Irish regiments there and even Denmark. He had been given the task of ending the threat from the Enniskillen garrison, which had spent time gathering forces since Tyrconnel's purges and who had been, through their raiding actions, providing problems for Jacobite logistics while most of the fledgling Irish army was engaged at the siege of Londonderry.

The grander strategy that had been discussed at the May 1689 Dublin Parliament, had involved using Berwick and Patrick Sarsfield's troops in conjunction with Mountcashel's movement from the south. Sarsfield and Berwick had both fought smaller Enniskillener detachments in the previous months. Berwick had even achieved a victory of sorts at Cornegrade Castle. There would be no link up of the three armies however, and Mountcashel would be forced to fight alone.

There are varying historical records with regard to numbers, so we'll just field the regiments present for 'Maurice' with more detail when we try out other rulesets.

Mountcashel's Regiment
Mountcashel's own troops. Detailed in the Jacobite Narrative and the works of French ambasssador D'Avaux and Former Lord Lt. Ormonde, this would have had between 450 and 600 men. Of all the regiments, it would have been the best led, best trained and possibly the most experienced - therefore regular. Greater numbers are suggested in other sources.

Bophin's Regiment
John Burke's (Lord Bophin's) had 13 companies though records suggest that it was undermanned. There is some historical discussion of conscript troops being added to the muster as Mountcashel moved north. Classed as Poor or Inexperienced troops.

Cotter's Dragoons
Recorded as having around 360 men. These would have been classed as regular.

Clare's Dragoons
Recorded as having had 450 men. At least part of the force of dragoons was mauled at the Lisnaskea ambush earlier in the day with Anthony Hamilton. One regiment will be classed as Poor therefore. 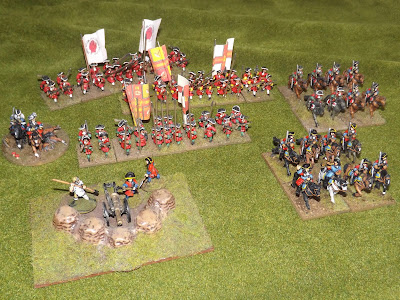 Led (literally for days) by William Wolseley, who arrived with Kirke's Londonderry relief force, the Enniskillen garriosn had been raiding and fighting for months and can be classed as a mix of regular and a few elites. 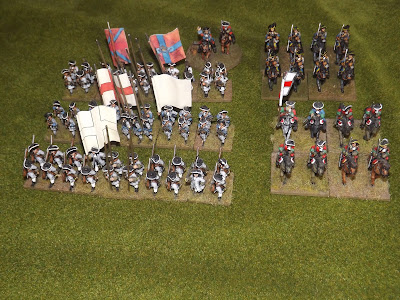 More on the battlefield and prep next time. One unusual facet of the Enniskillen sources is that the Enniskillen regiments leave their pike element 'behind' when they move over swampy ground on foot. This is understandable since the ground in question was impassable to cavalry on the day. More on this, and how we will simulate it, next time. (We might even get the game in LOL).