Volley and Bayonet - Things to Come...

Gobin has frittered away many hours with Volley and Bayonet over the years. It is very much a traditional set of rules, yet is designed at a scale (albeit variable) which allows full battles to be refought, rather than a side skirmish at  a famous action. The recent revision fixes many of the minor flaws and improves the system.

It does this through adopting a 'brigade base'. In the original 1995 version, the system was expanded with excellent ACW and Napoleonic supplements, and others (which Gobin has managed to obtain). We'll be experimenting with this after our 'Rapid Fire' actions, though here's a teaser pic...Because the stand (normally 3" x 3", but can be scaled to 2"x2" as shown) is effectively the unit - the scale of the miniatures doesn't matter, hence 2mm, 20mm ...or even 54mm can be used. Now where did I put all those Napoleonic 54mm plastic figs that I had as a kid, then reinforced on a whim.

It is with regret of course, that we learned of the death in March of its co-creator Greg Novak (Greg's website is here: http://home.comcast.net/~greg_novak_670/site/?/home/ ) 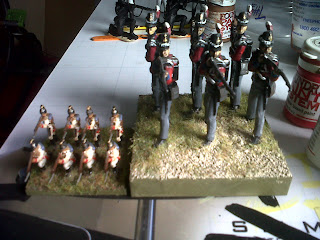 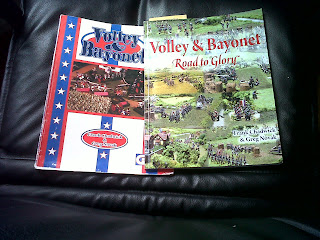 Email ThisBlogThis!Share to TwitterShare to FacebookShare to Pinterest
Labels: Volley and Bayonet

For the first game in our 'let's have a look at the latest edition of some tried and tested rules' segment, we had a look at 'Rapid Fire'. Now, back in the day (the 90s), the original version of these rules had a distinct appeal - since they were so damned simple, and featured some lesser known battles.

Rumford and Marsh's latest edition dates from 2005. So we began with the 'in-book' introductory scenario, in Lingevres, Normandy, 1944. 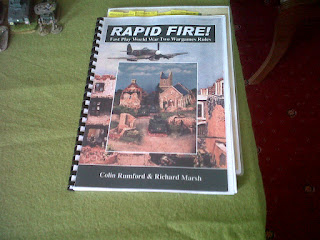 We used the set-up as book, so that we could avoid any more advanced rules re. hidden movement. Though, that would have made things more interesting of course. 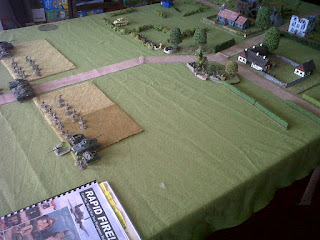 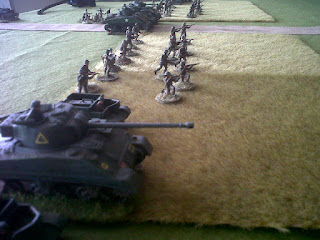 British armour and infantry arrayed on the start-line. 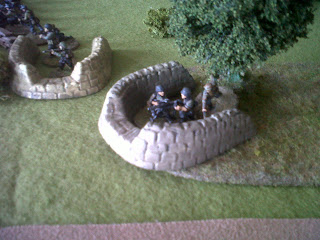 German defenders were well dug in however. 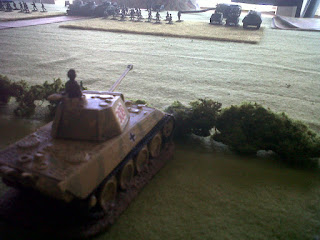 The solitary German Panther (to be reinforced on turn 8...if it survives) surveys the British lines. 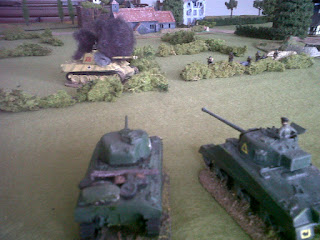 Ah...spoke too soon. The Firefly makes short work of the Panther, but not before it has claimed a Sherman and Achilles. It's still a long hard slog to the village, especially with that dug in elite infantry in the way. 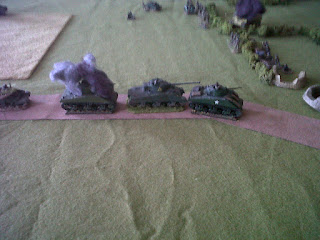 Keep it moving, and watch out for... 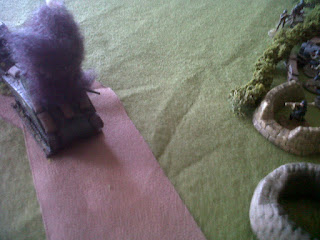 ...Panzerfausts, damn! (Yes, yes, the figure has a Panzerschreck, I know.) 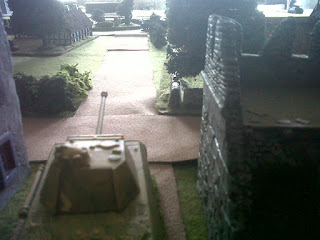 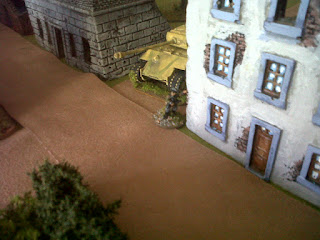 By turn 8, the defenders have cost the British dearly, despite their own terrible losses, and they are being reinforced with more armour. 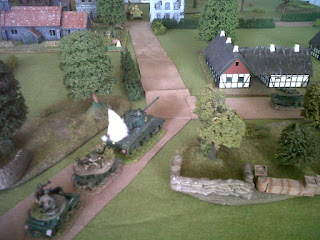 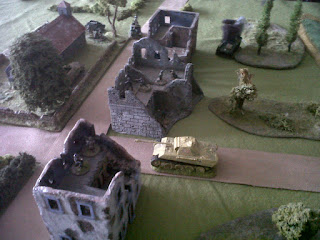 The second Panther holds off and destroys the remaining British armour with some of the luckiest dice rolls ever seen! 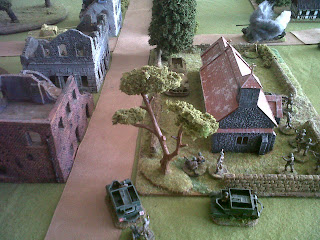 By game's end, the battered British infantry battalion has cleared the road and got its last elements into the church, but the German defenders cling on doggedly to the village, and they still have armour. Time for a bloody cuppa!
The verdict? Gobin is less jaded and enthused once more. Falconer's opinion...awesome! Rapid Fire continues next time...
Posted by Duc de Gobin at 12:19 1 comment:

Welcome to the 'Warfare in the Age of Cynics and Amateurs' Wargaming Blog (ok, let's call it WACA for short). The ongoing saga of two wargamers and the games they 're'discover.

Le Duc de Gobin is a cynical tabletop general who started wargaming with WRG in the early 80s. Having gone through the vagaries of the more disturbing rulesets of the 90s and 00s without having succumbed, and now felt the urge to re-discover the games he missed, he hopes to find enjoyment in the hobby once more, without becoming jaded by rules complexity.

Lord Falconer-Fitzwilliam is new to the hobby, yet has had an interest in military history from an early age. Having discovered the joy of the wargame and become interested in its potential, he joins the serried ranks of those wargamers who still find the hobby shiny and new.

We will be presenting our monthly series of games in picture and/or discussion format (mainly for purposes of record keeping, rather than entertainment...though we do of course hope that you will find something interesting here).