Ahhhh I love the smell of Volley & Bayonet in the morning...smells like, perfection.

The second V&B clash was set during the American Civil War, near Murfreesboro. A little Reb vs Yank, where both historical commanders actually had the same plan - i.e. to turn each other's right flank.

Interestingly, our own clash proved a little different.

But firstly...having decided that my felt interpretations of rivers for the game were far too bland (granted she used a different word. I believe it was 'terrible'), my youngest daughter decided to use her chalks to add a little colour. Now, despite Dad's initial trepidation, she did a fine job, turning the blue felt into fast flowing rivers, as you can see. 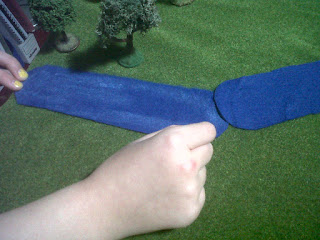 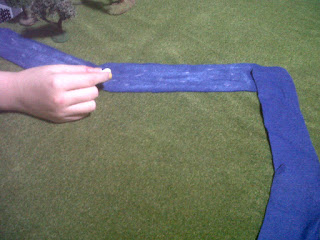 The overall effect was really quite impressive. I will have need of these artistic services again...well, at least until she works out that she can charge me money. 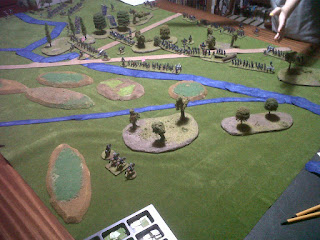 ...and then Faulkner Fitzwilliam arrived and it became 'Game Faces' time. Choosing the union troops, FF would have the tiresome task of defending his flanks. Now, the neatest mechanism in V&B is centred on division exhaustion levels. This is where troop quality is factored into the division and represents it starting to break as casualties mount. The Union divisions were therefore a little fragile and when to commit the reserve would become an important decision.

The main Confederate attack came on the Union right. Fast moving Reb cavalry charging against the flank. Would Union horsemen hold out? 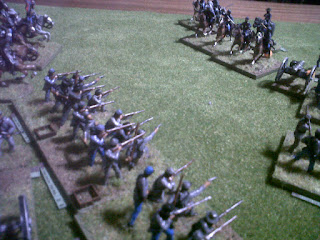 Astute observors will also note the single (rather than double) dice marker/frame combos used this time - complemented by miniature 'pompoms' (courtesy of aforementioned daughter) in use for disordered and stationary markers. 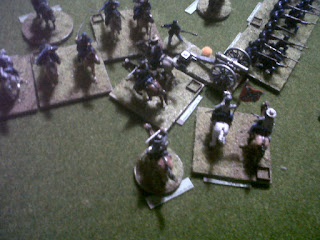 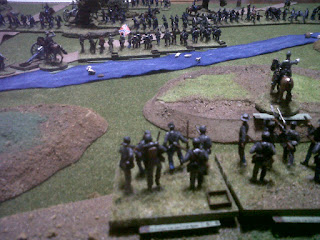 Meanwhile in the centre, the Rebs mass for a charge. 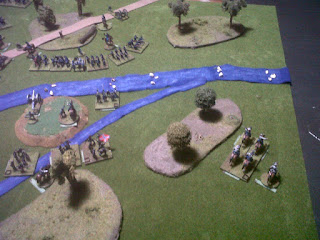 While on the right, Gobin begins his planned flanking action with far too few divisions and perhaps a little too late. Of course, no plan survives first contact. 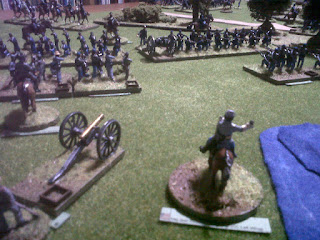 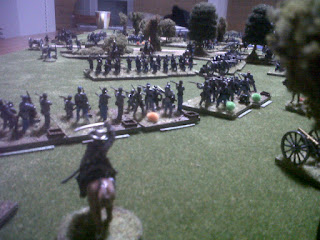 The left flank sees most of the action as the Union troops bend...break... 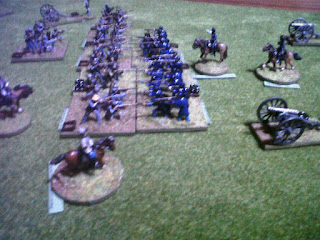 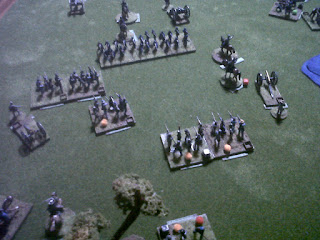 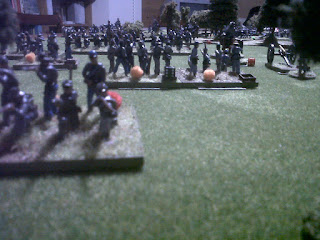 ...then return valiantly to the fight, stopping the Confederate onslaught. In the background you can just see the reserve committed to the Union right. (Yes, those chaps closest to the camera are running away!..SIR! Look to your Division!!!) 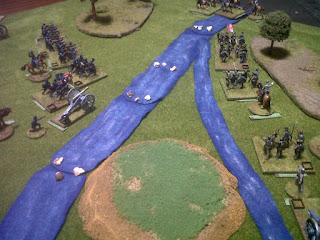 Probably the best decision since not only was the Confederate right mucking about, but the Union left flank had been maneuvered into defensive positions. 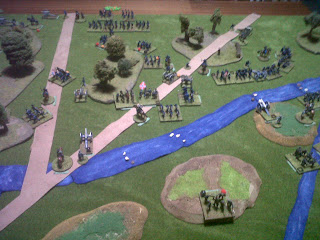 Gobin realised at this point that the game was up...as the centre had become a bit of a mess. Charge, countercharge, rout, reform, disorder...dude! Where are my troops?

Volley & Bayonet will return for 'Quatre Bras', when Gobin will have his revenge.