This scenario is straight out of the 'Pike and Shotte' adaptation of 'Black Powder'. The main reason behind doing this game was to gain some familiarity with these popular rules (there aren't that many differences between the two sets, bar obvious period concerns). The scenario itself makes a few changes re. the actual battle/history - which suits the figures I had anyway (Irish as allied troops in 1689 etc.).

Overall, the rules give a decent game - so we were less concerned with the actual history on this occasion, hoping to find a set of rules that could ultimately be used for the American War of Independence (Black Powder).

Of course, with our positive experience with Maurice, there had to be comparisons - good and bad. Main points of discussion that came to light included:

Having said all that, it's still a decent set of rules and will require more testing/playing- especially so where the projected AWI games are concerned. Warlord Games also do excellent scenario books - something which is lacking for the Maurice rules.


And so to battle: 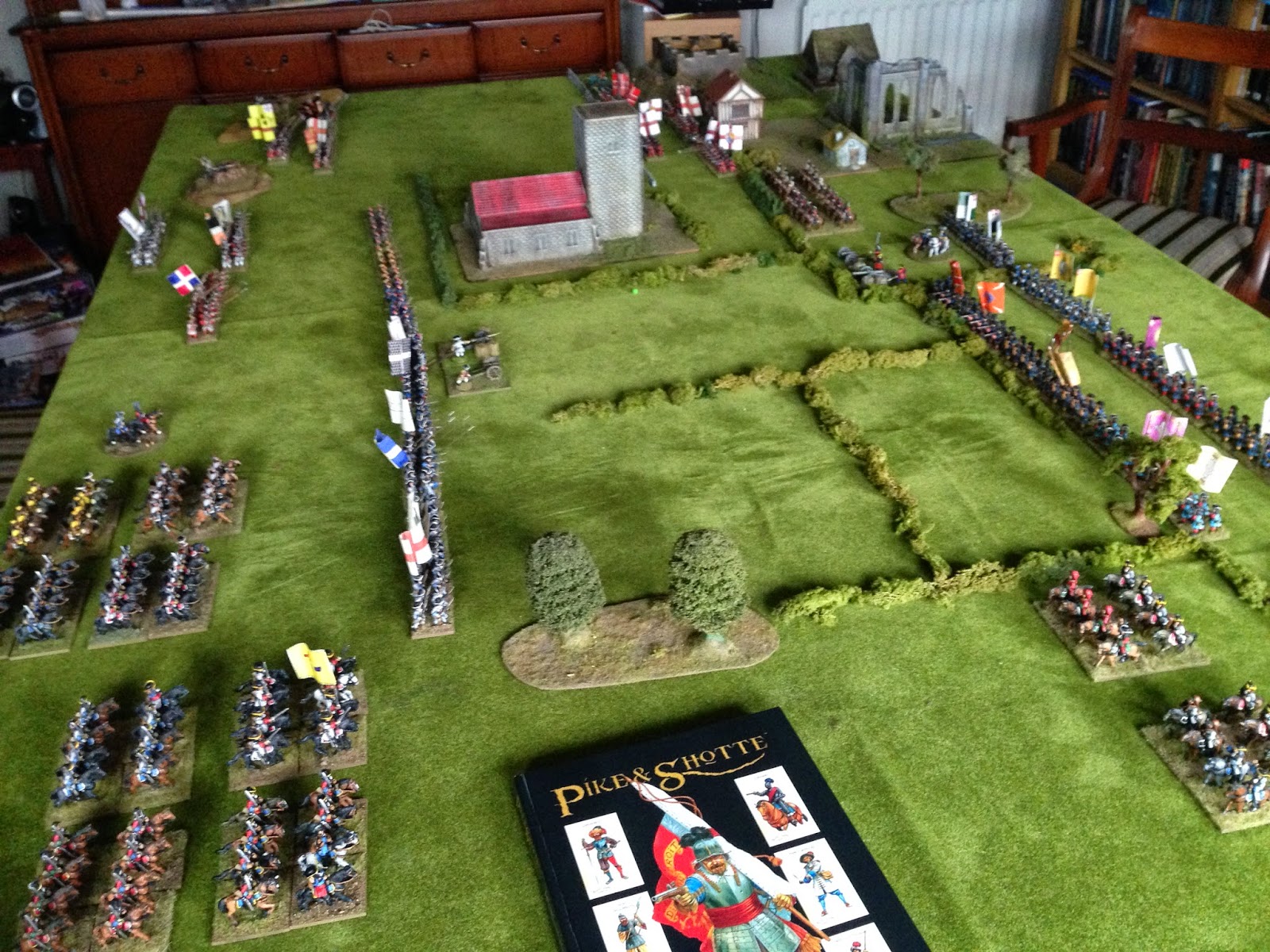 A nice linear battlefield. A lot of cover and an epic cavalry battle promised on the French right. 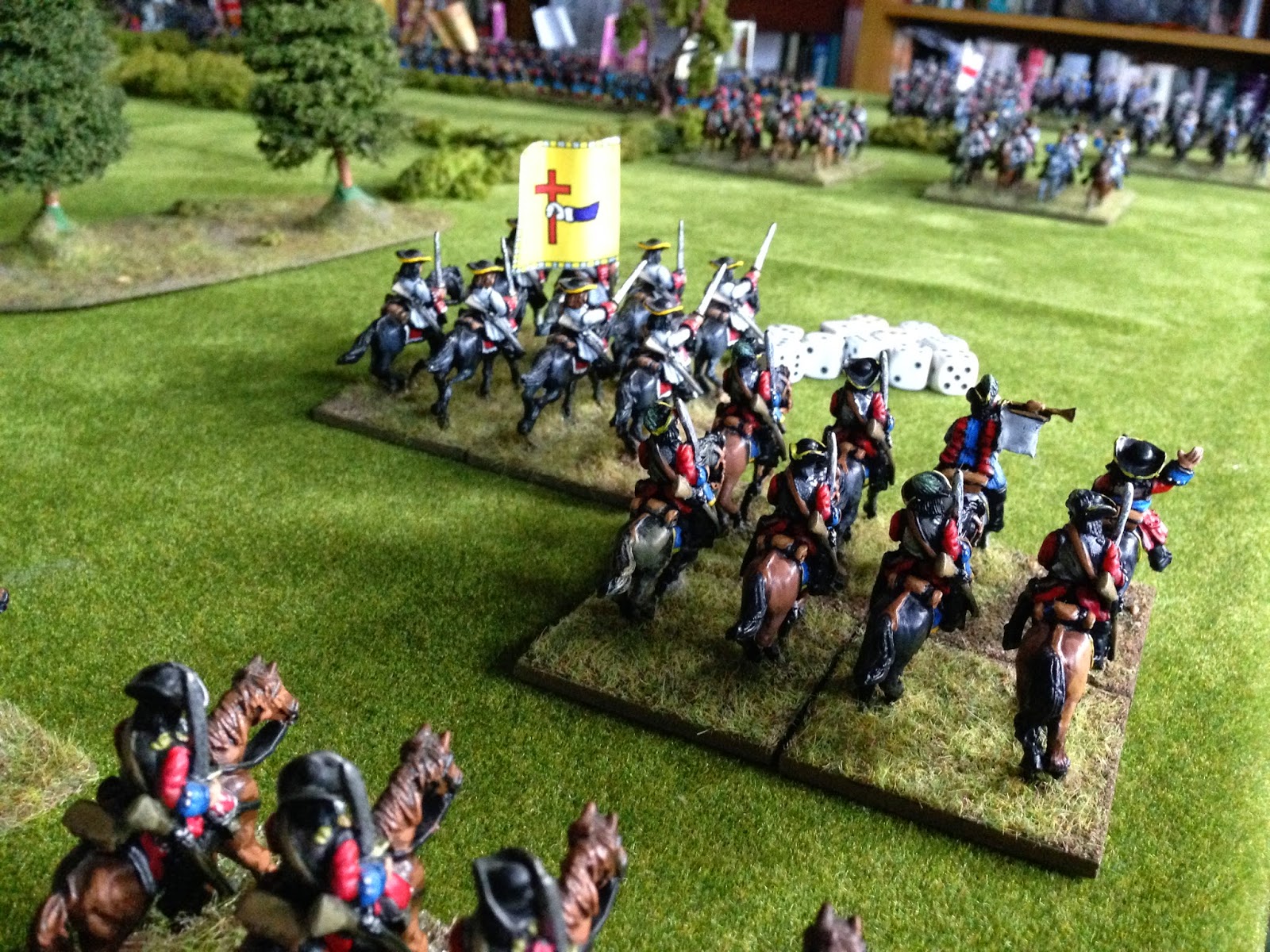 View from the French right. Dragoons, cavalry and elite guard cavalry will meet head on. 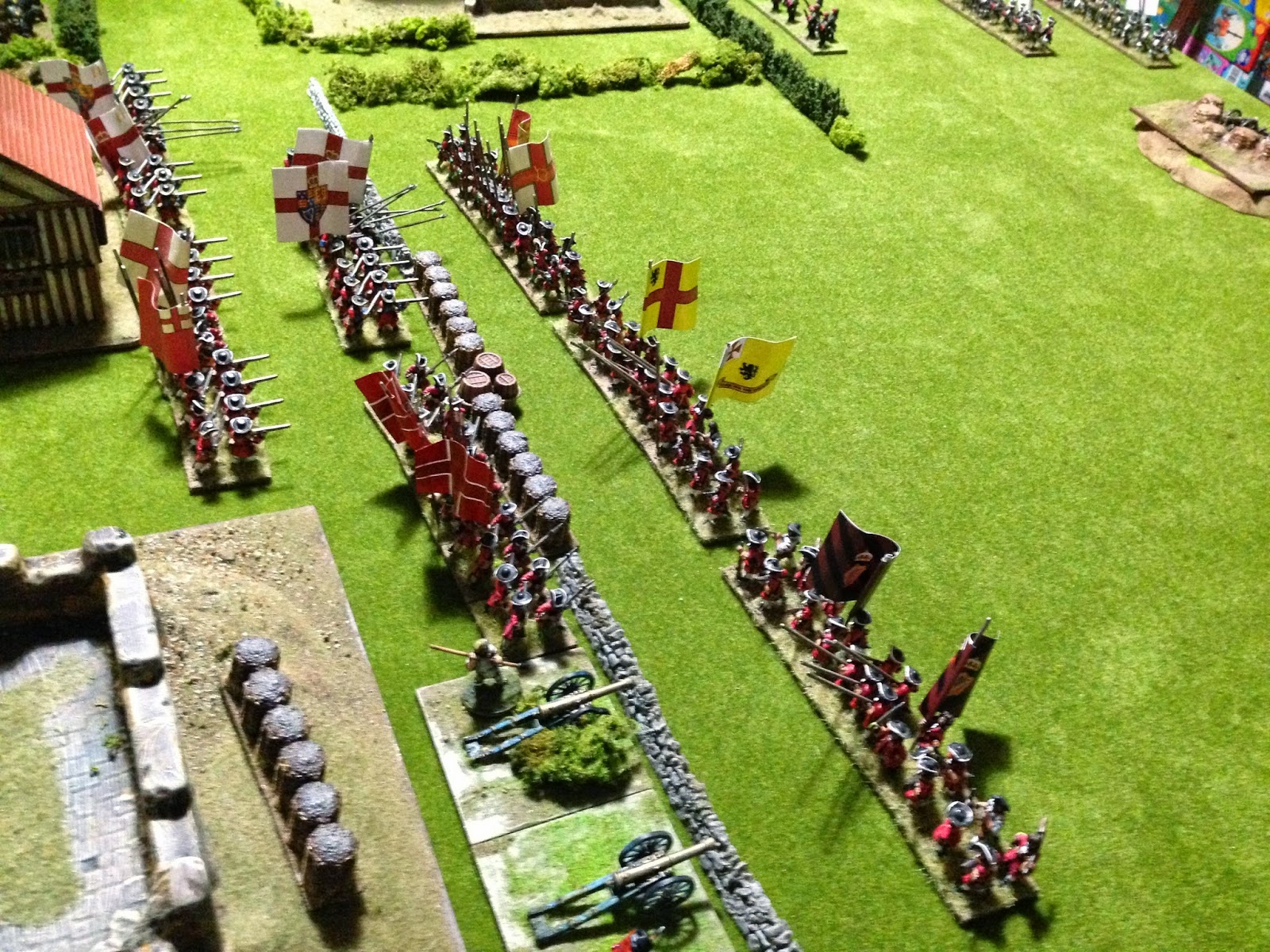 On the Allied right, early command points enable a triple move from the Irish contingent against the prepared defences at Walcourt. 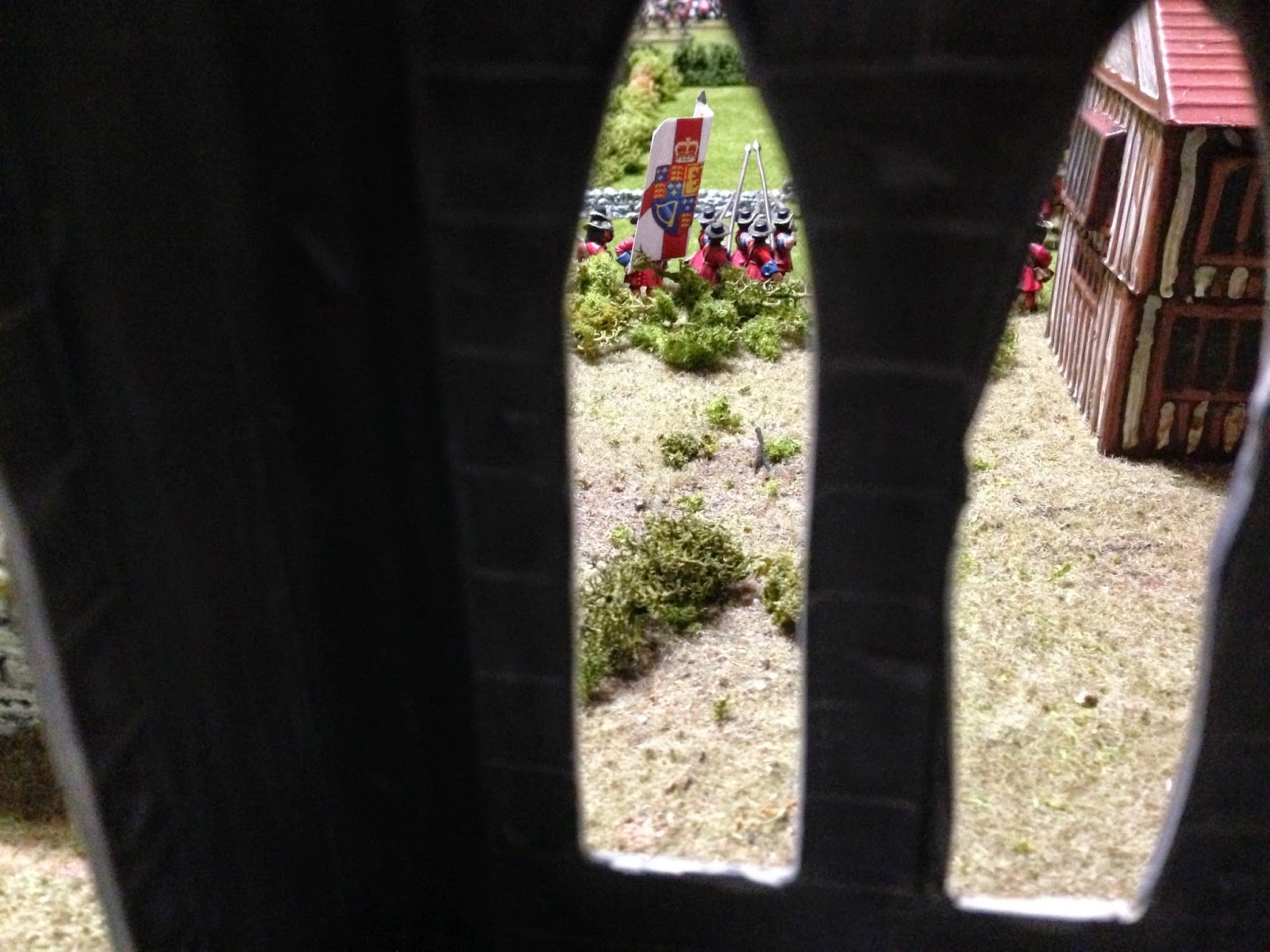 View from a pub in Walcourt. 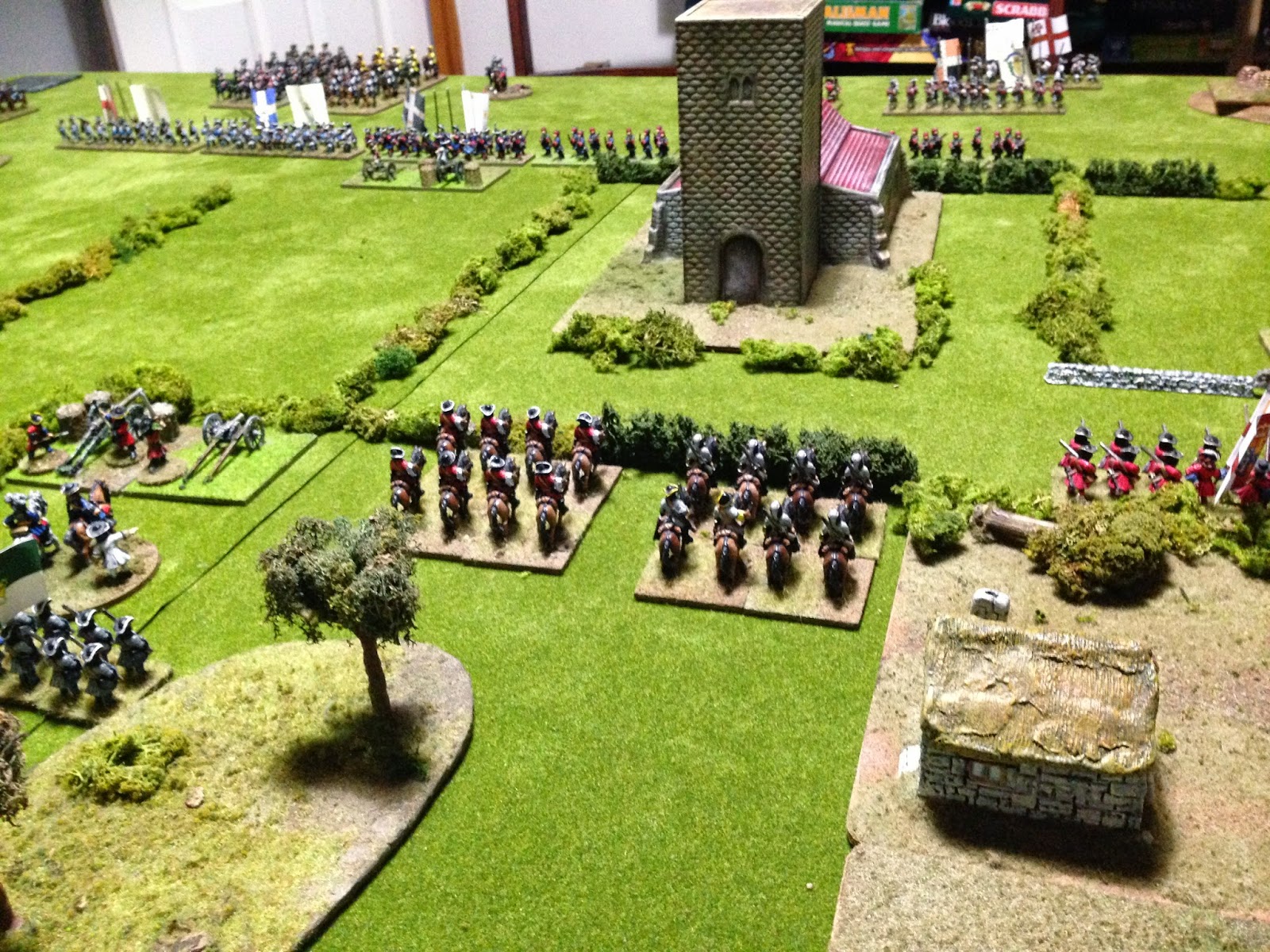 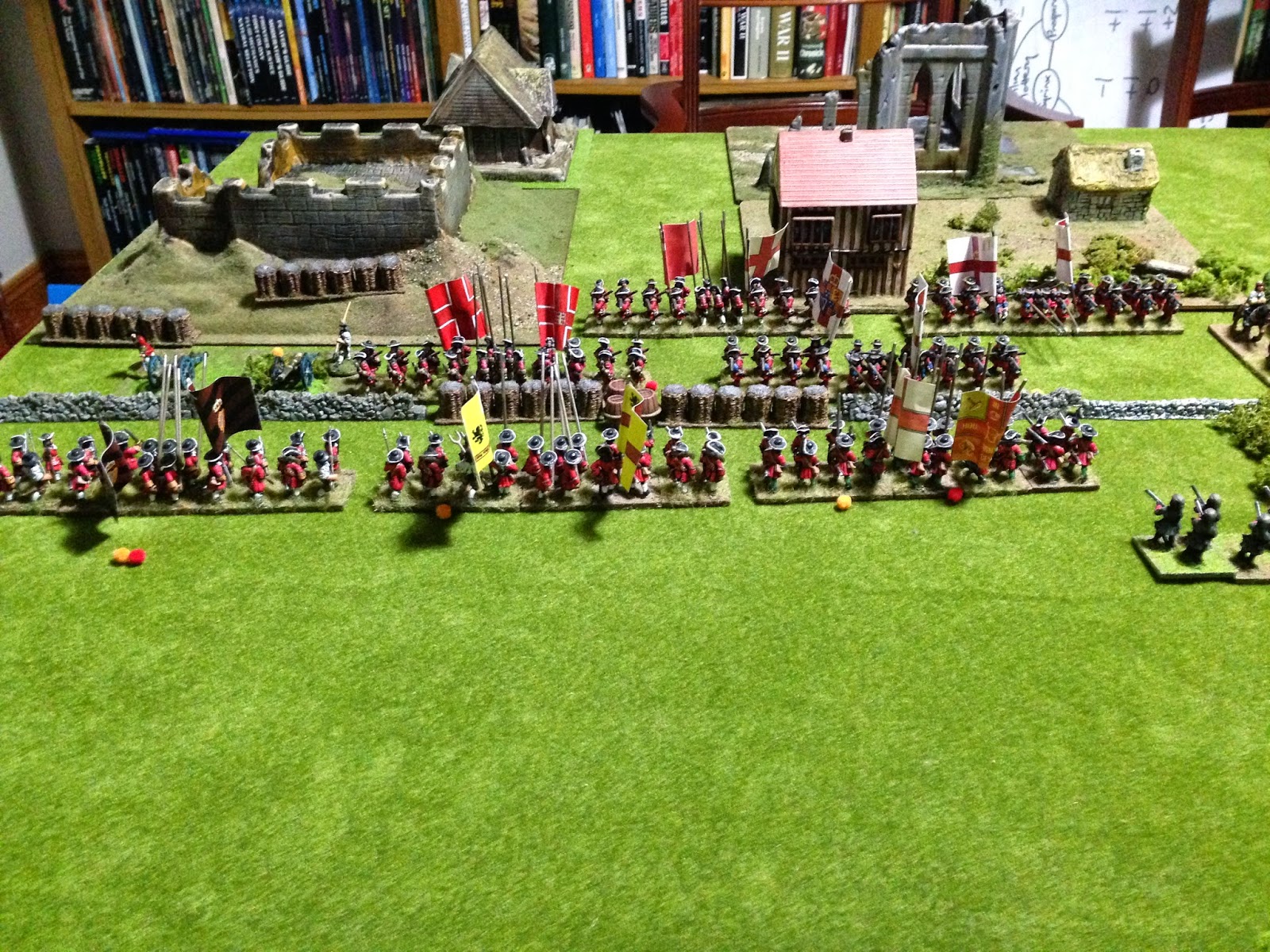 ...while the Irish remain too weak to assault the English units, and trade musketry. 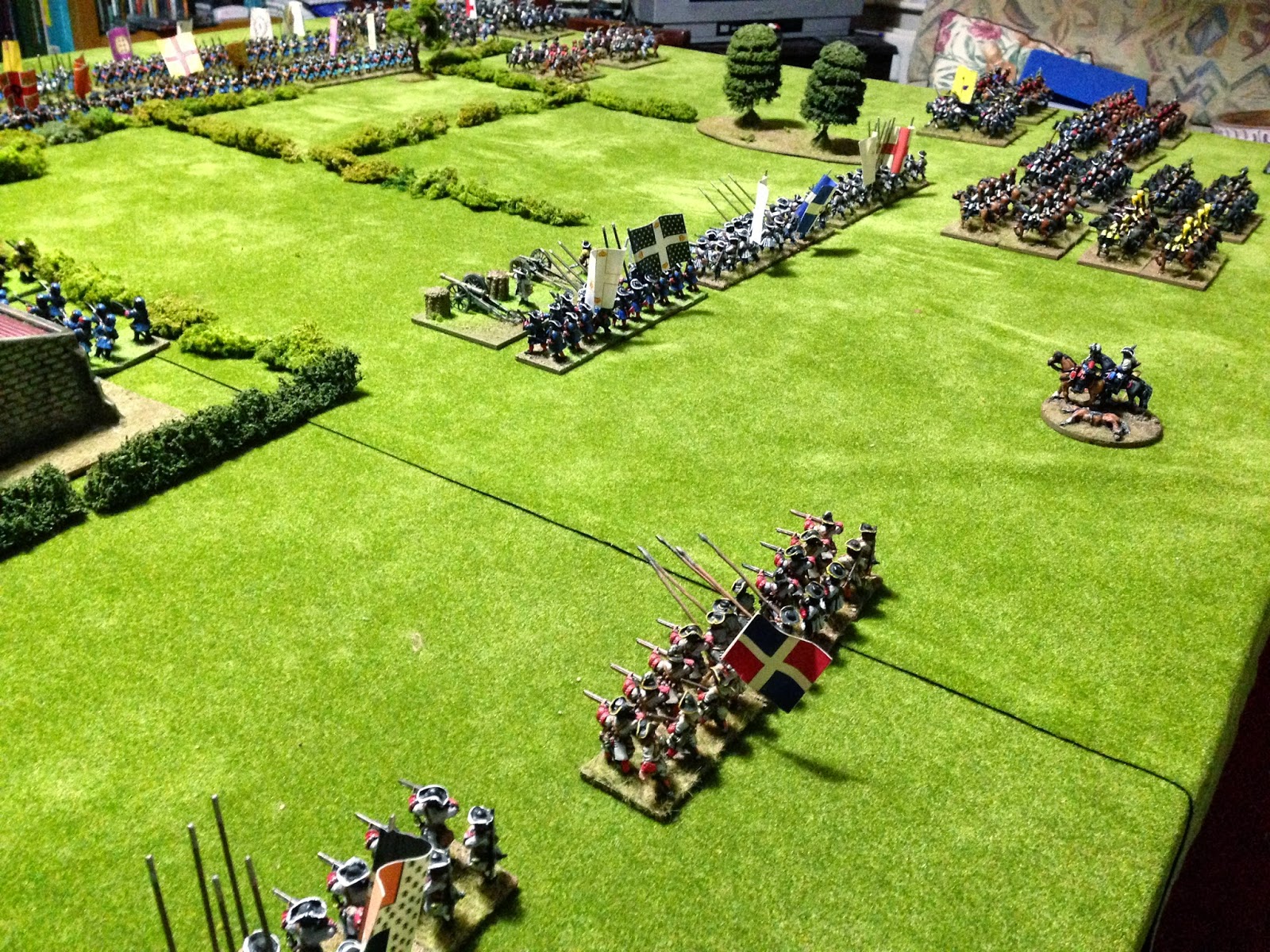 The French centre is strengthened by the presence of the Gardes Francais, and delayed arrival of allied reinforcements means that they have to attack quickly. 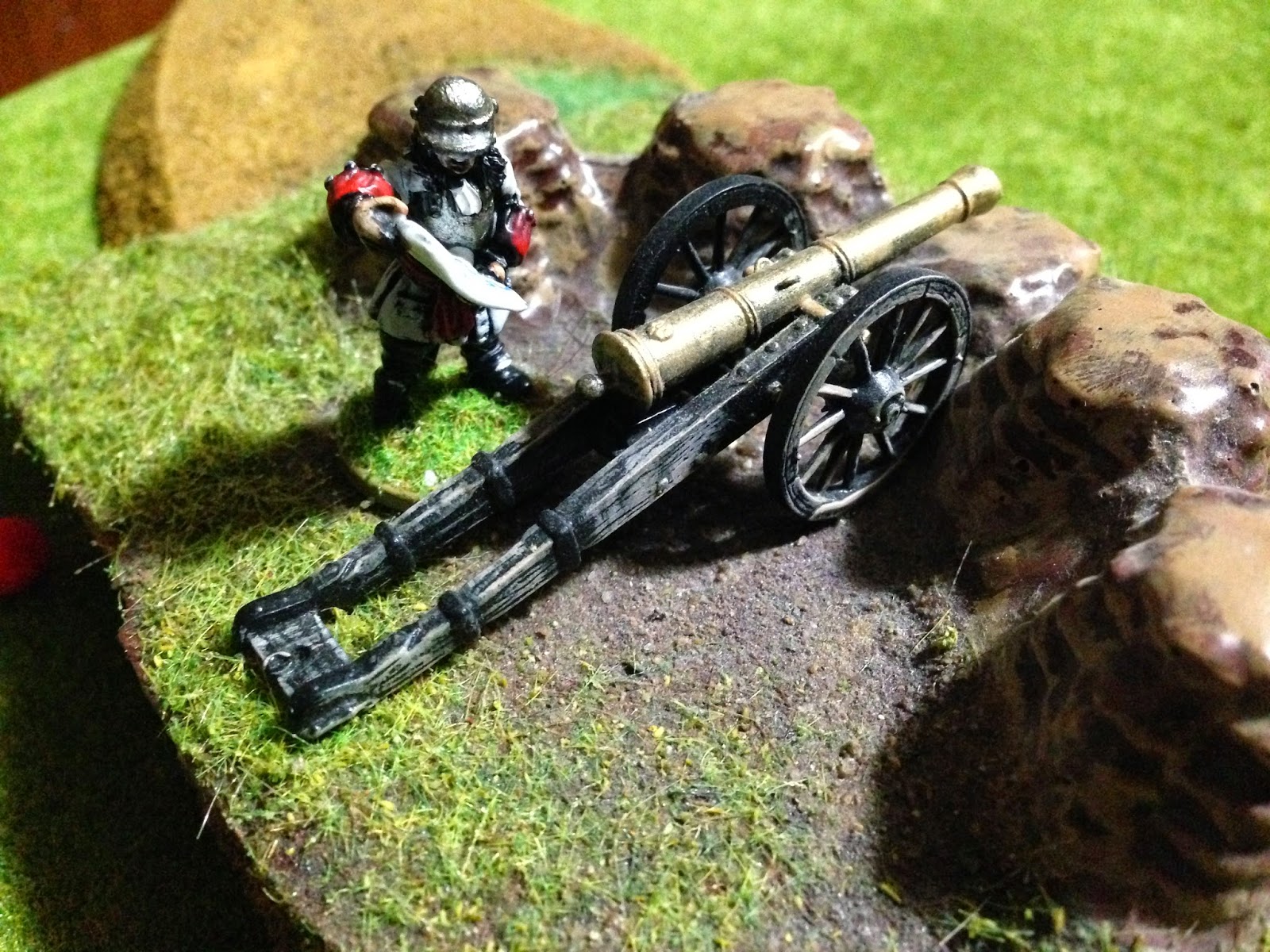 French gunners cease fire as the latest copy of 'The Sun' L'Equipe arrives. 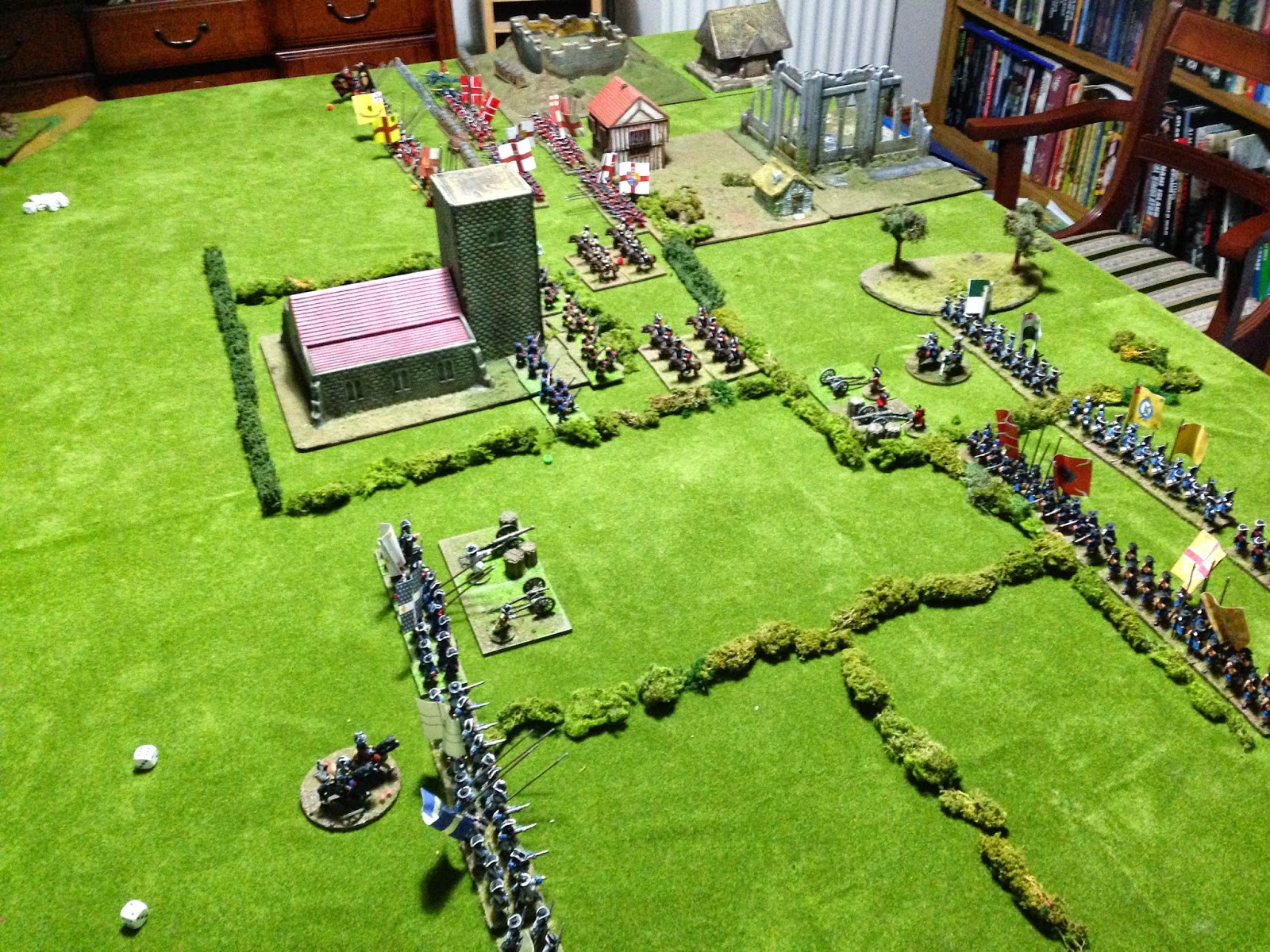 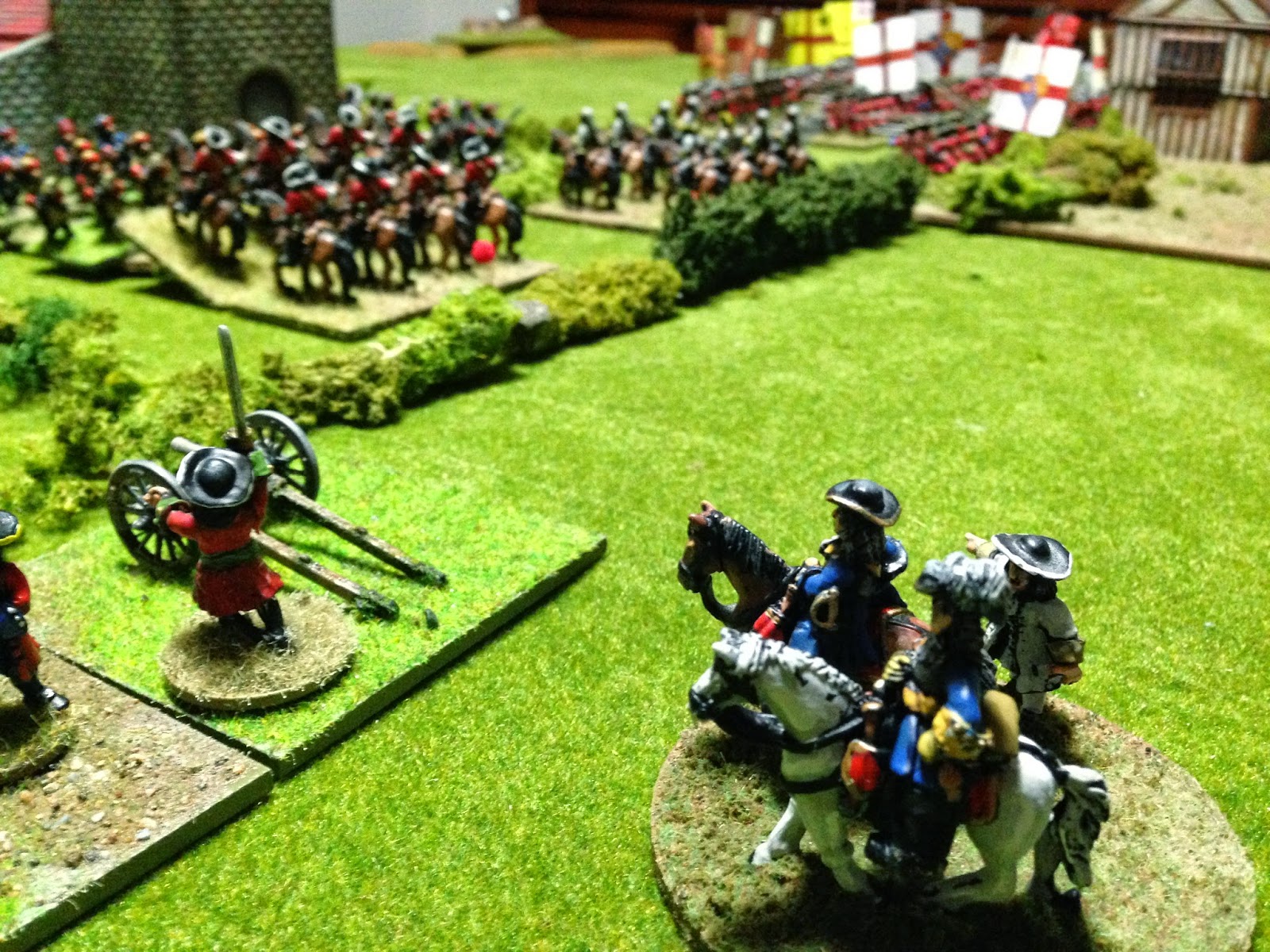 View from the Allied command position in the centre. 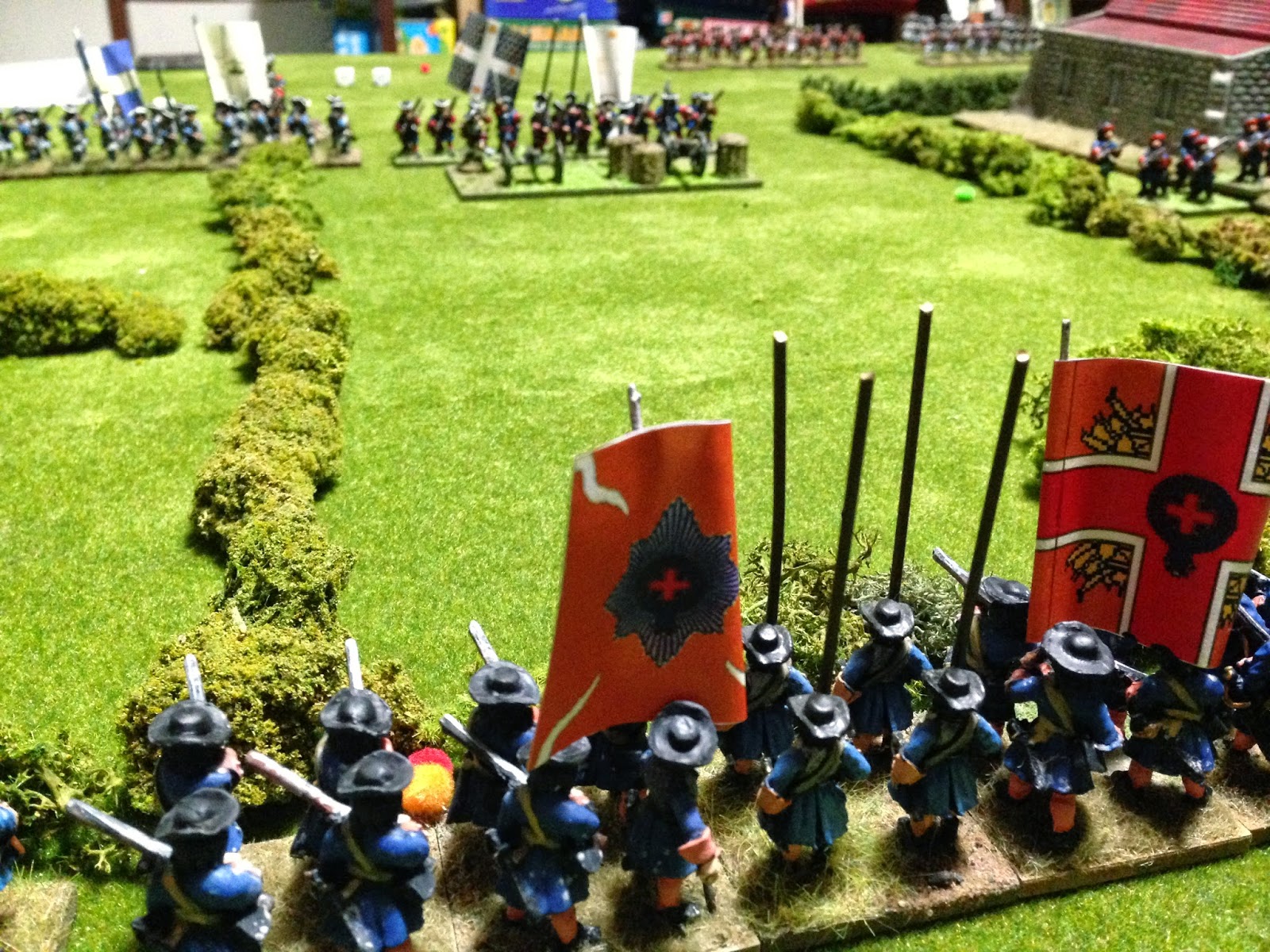 The French assault comes on, as the elite Dutch guards watch its approach. The French attack was considerably hampered by poor activation rolls, and it took many turns for it to get under way. In Maurice, the problems would have been different - in that sections of the battlefield would have remained static (but still using musketry) as the focus was placed where it needed (or could be managed) to be. With these rules, there's more of a random element in terms of where the commander can focus his attention. 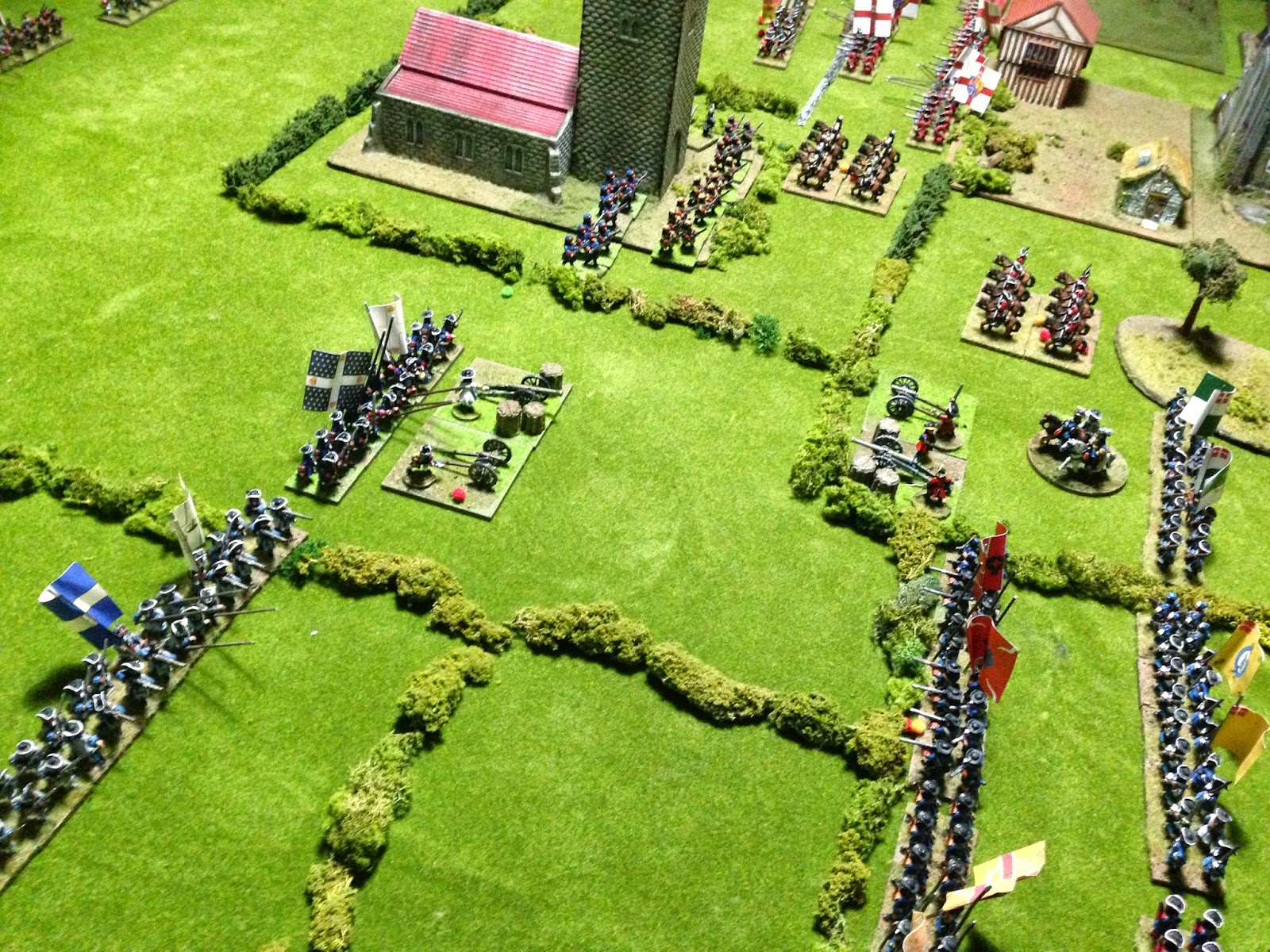 French dragoons capture the church in the centre. 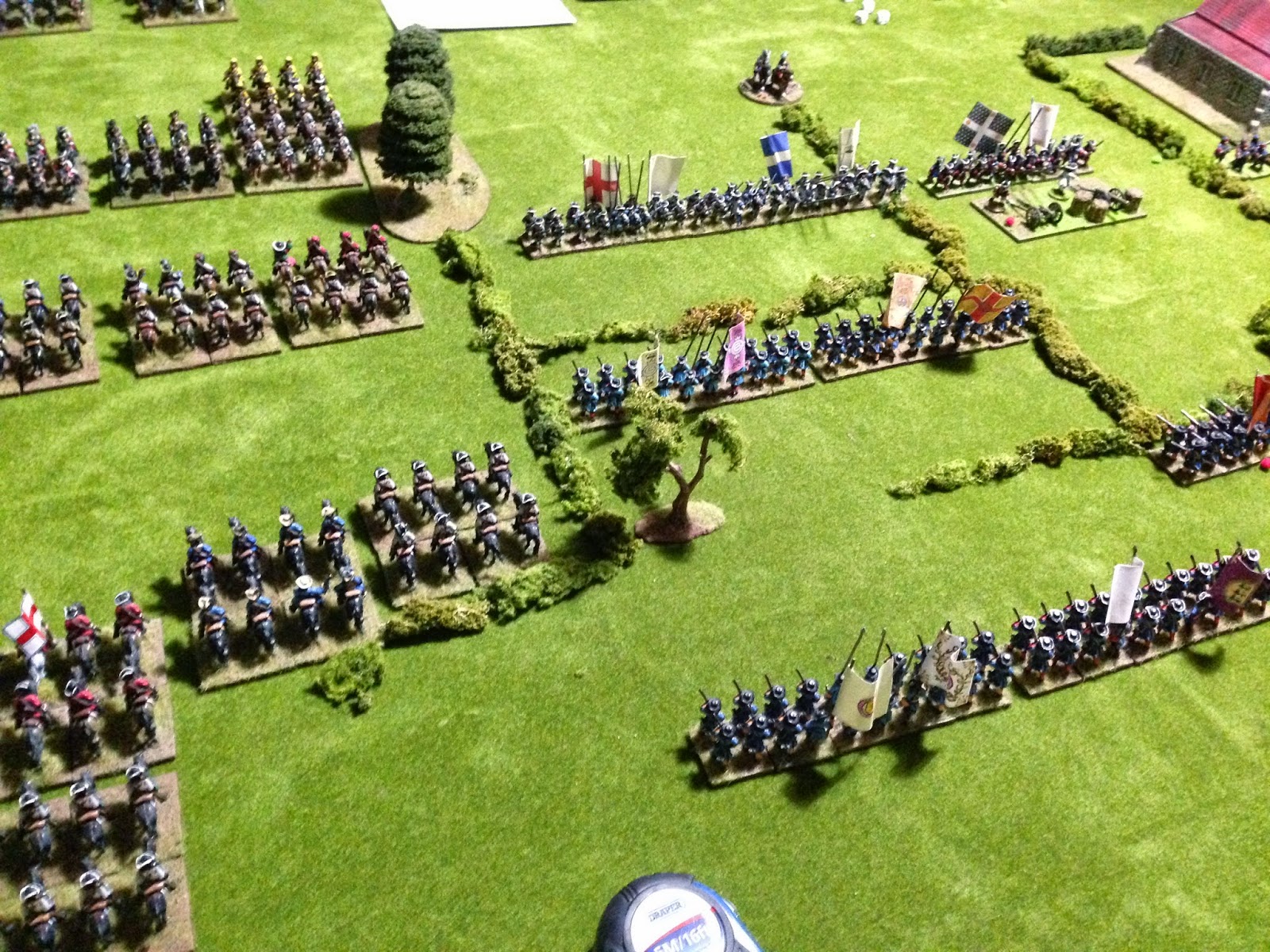 ...while a massive French cavalry attack gets underway. 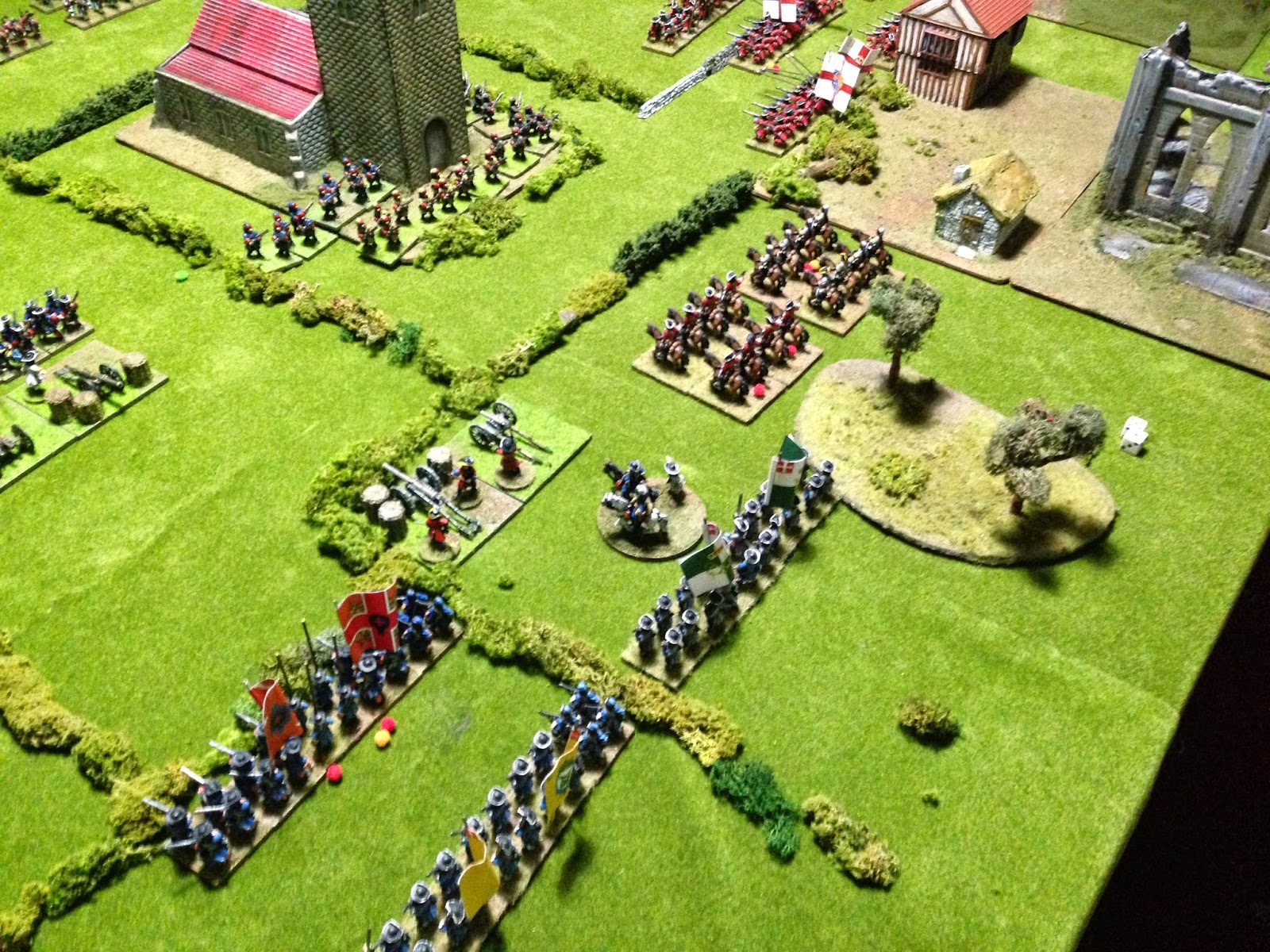 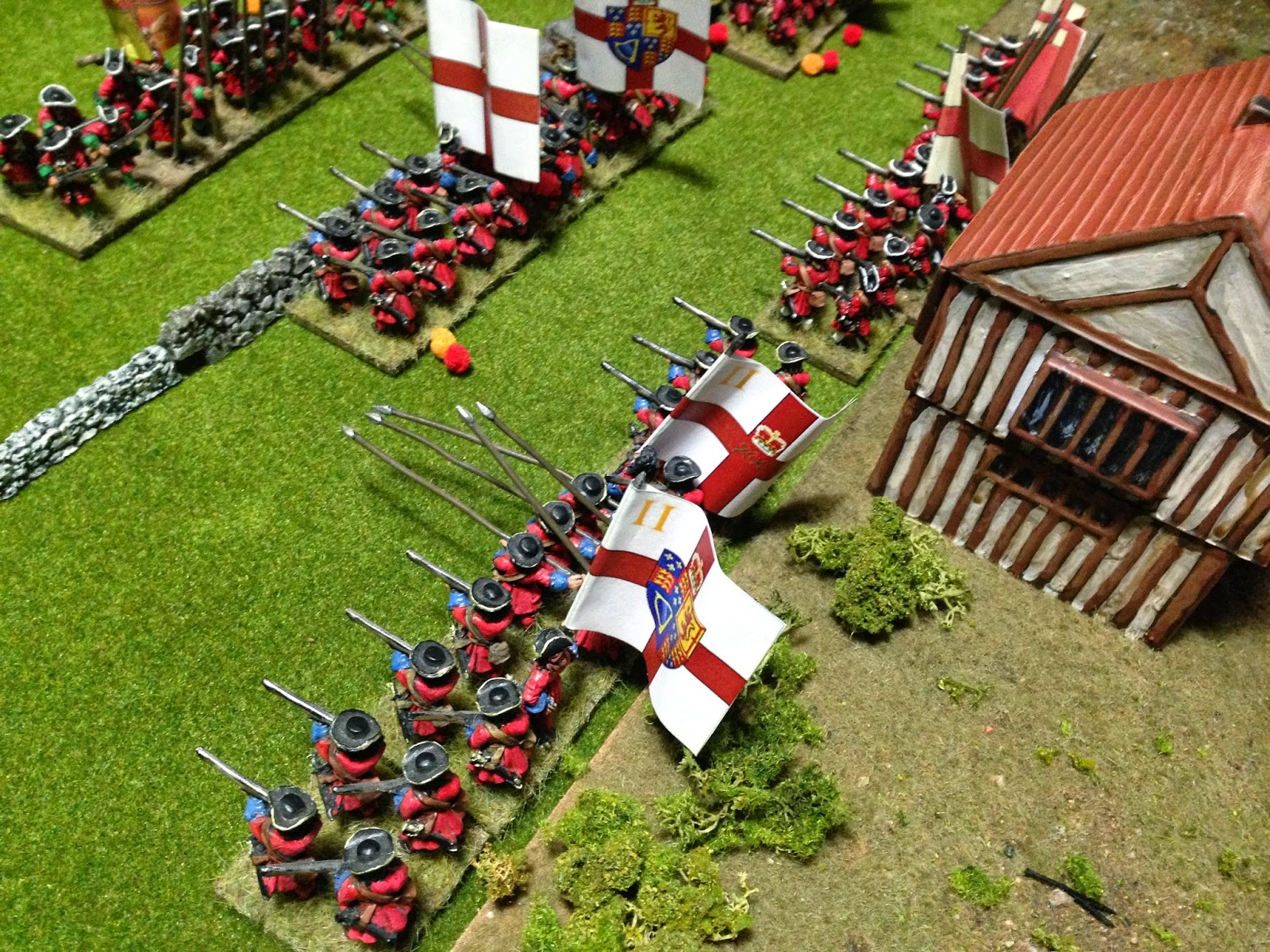 On the Allied right, covered English regiments give accurate fire toward the bogged down Irish. 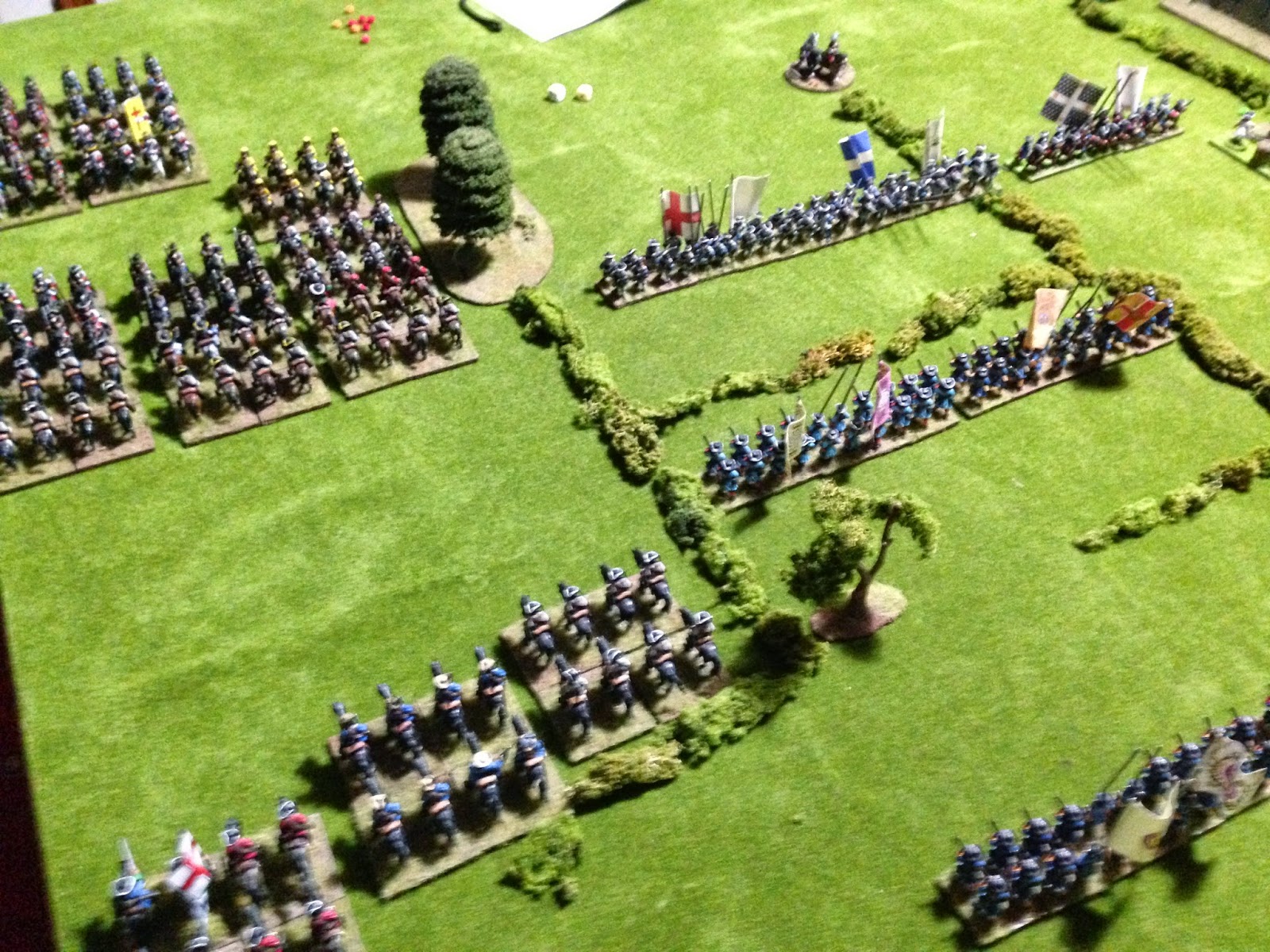 Cavalry charges go on for many turns on the right. The victor will be able to turn the flank - but so many units are involved. 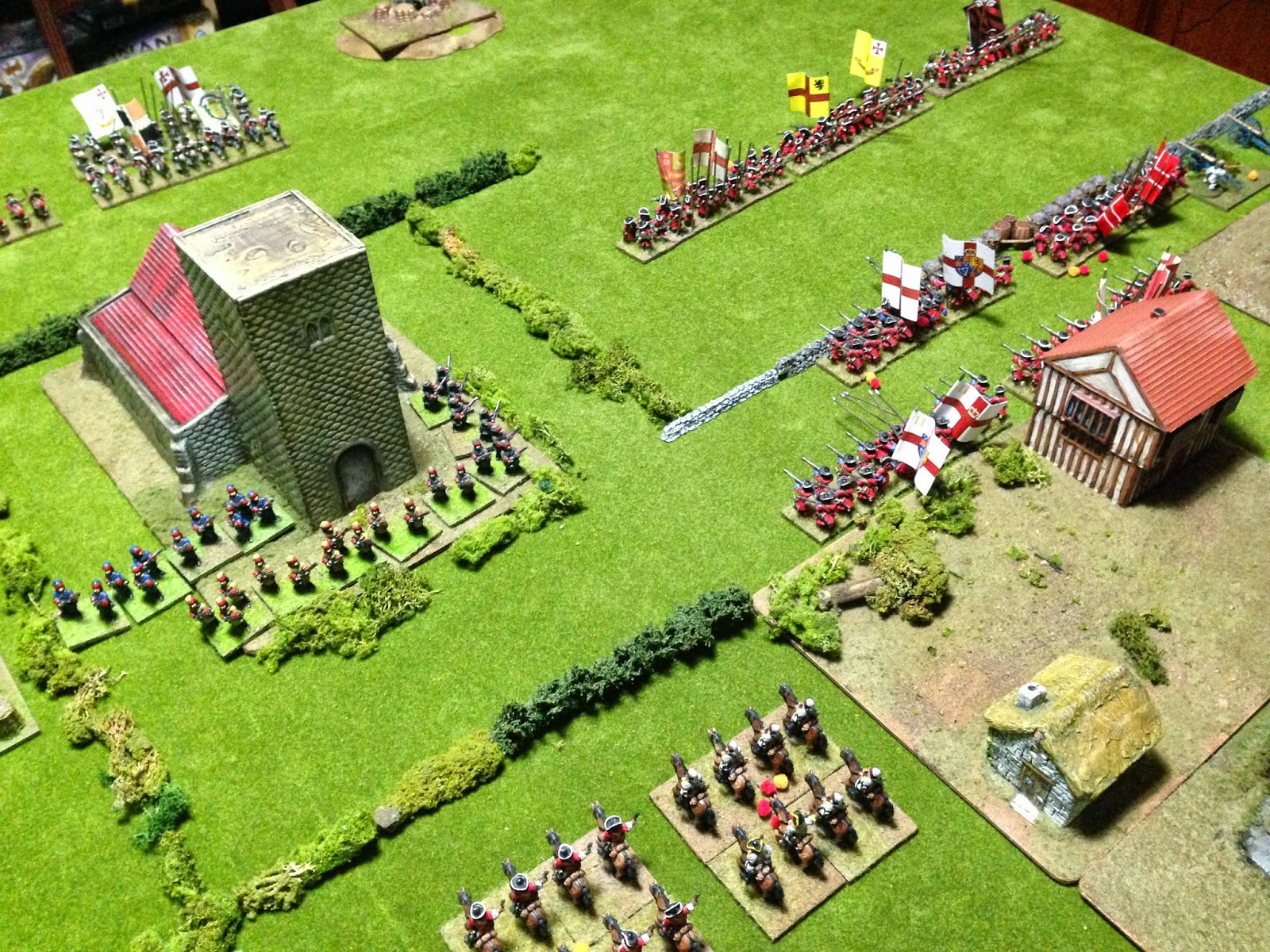 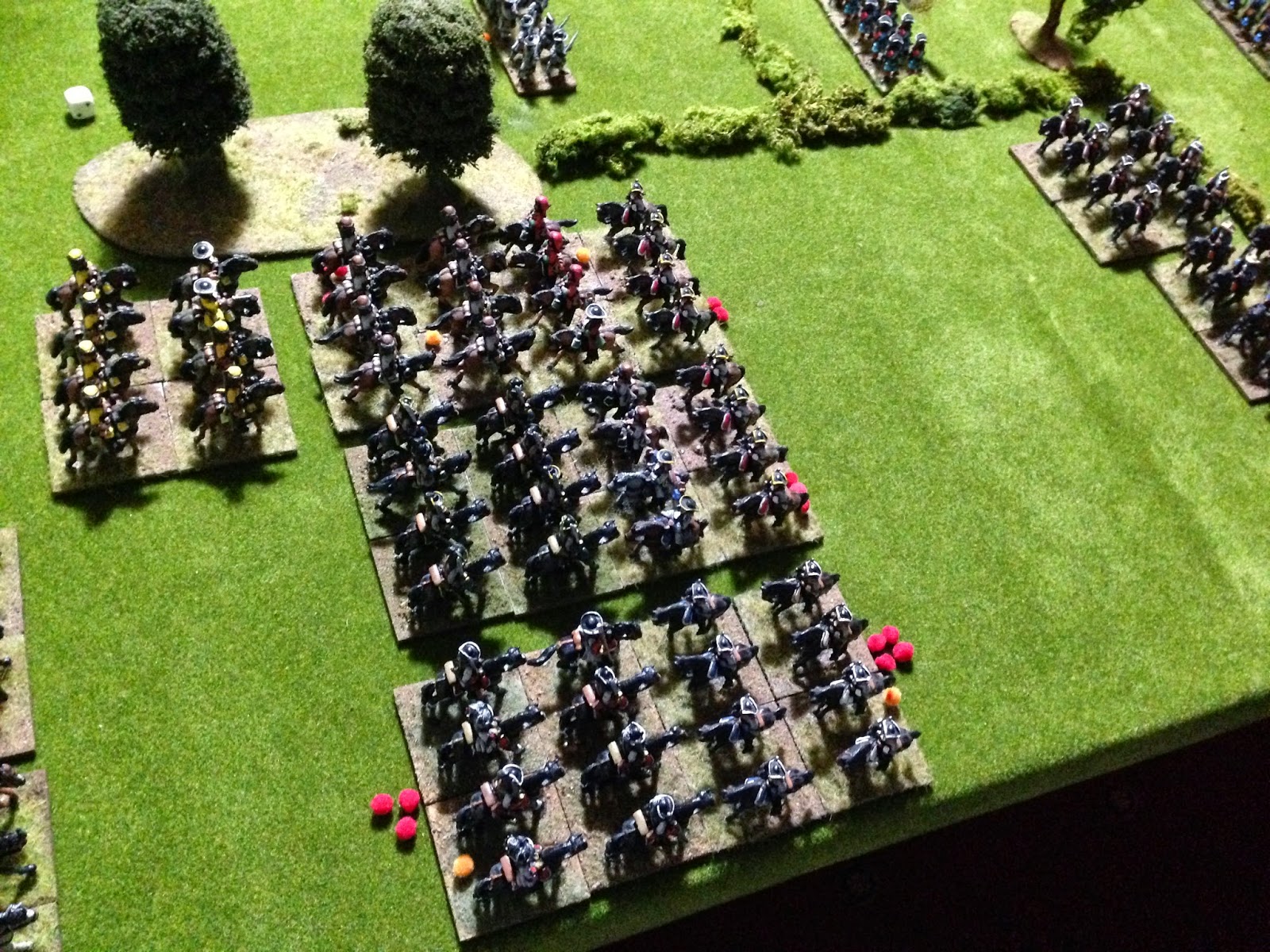 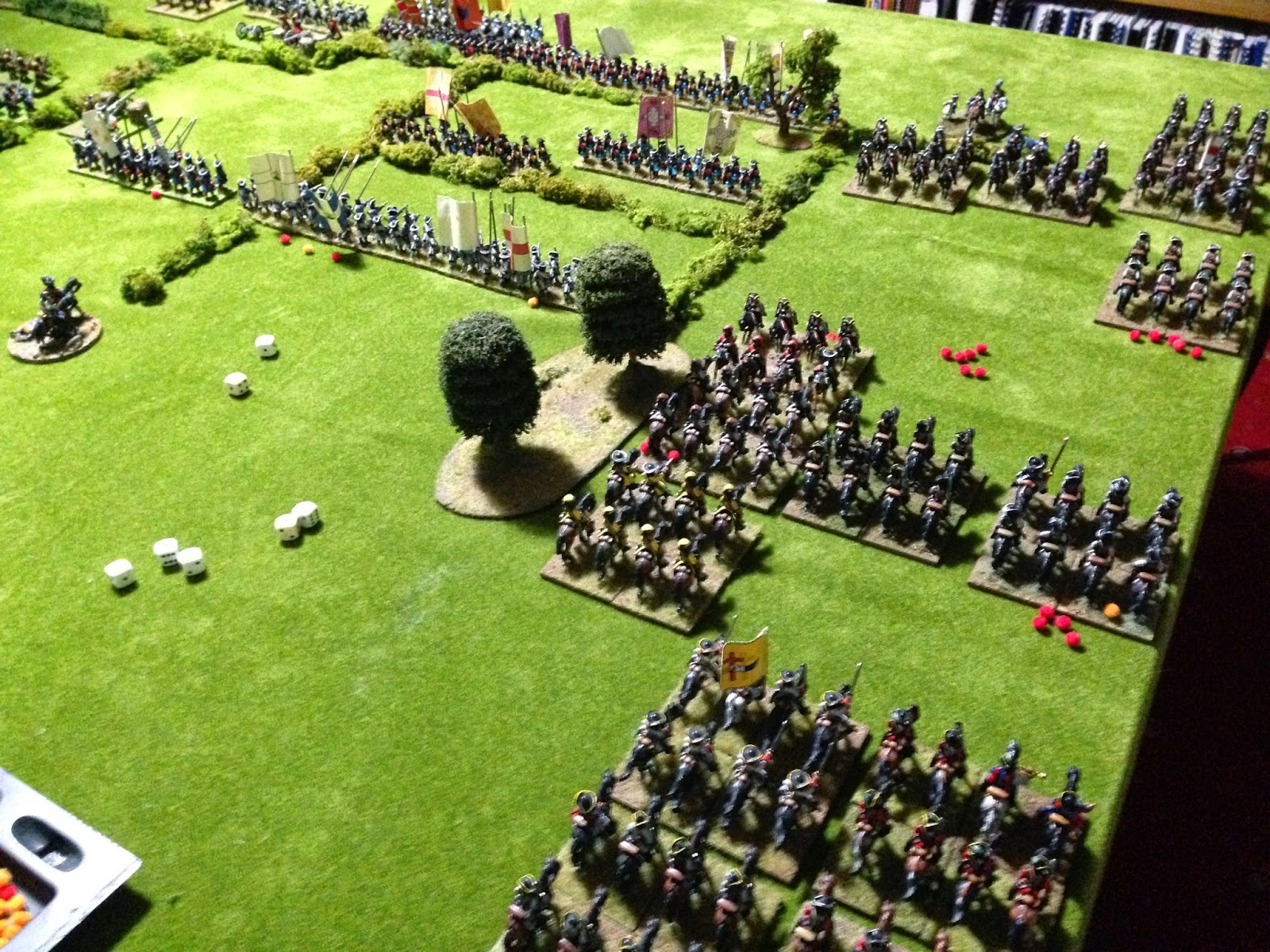 (We actually ran out of markers for casualties - it was becoming a bloody stalemate.) 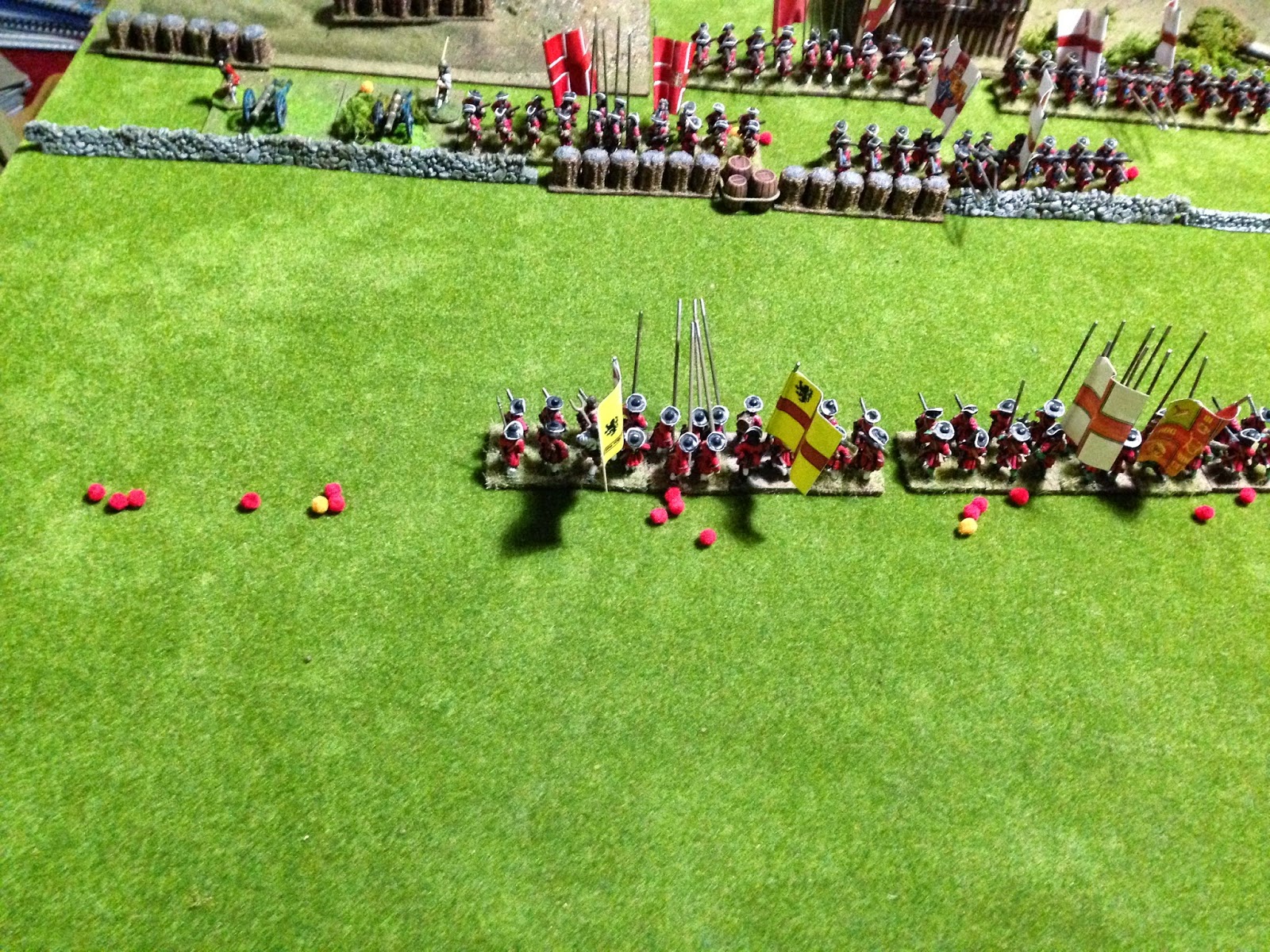 ...as on the French left - all that is left of a unit in the all too brief assault is a bunch of markers as it fails its break test. 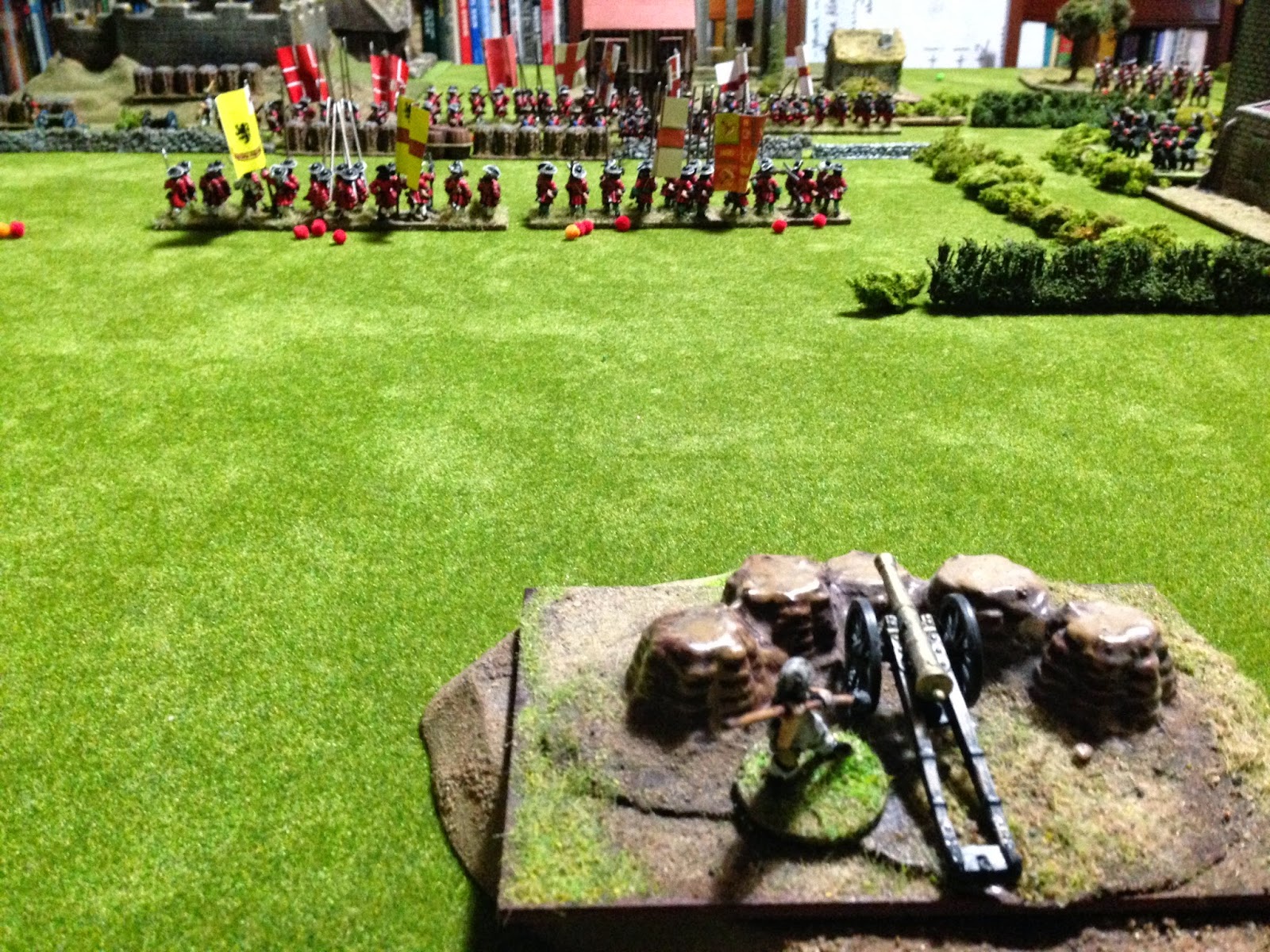 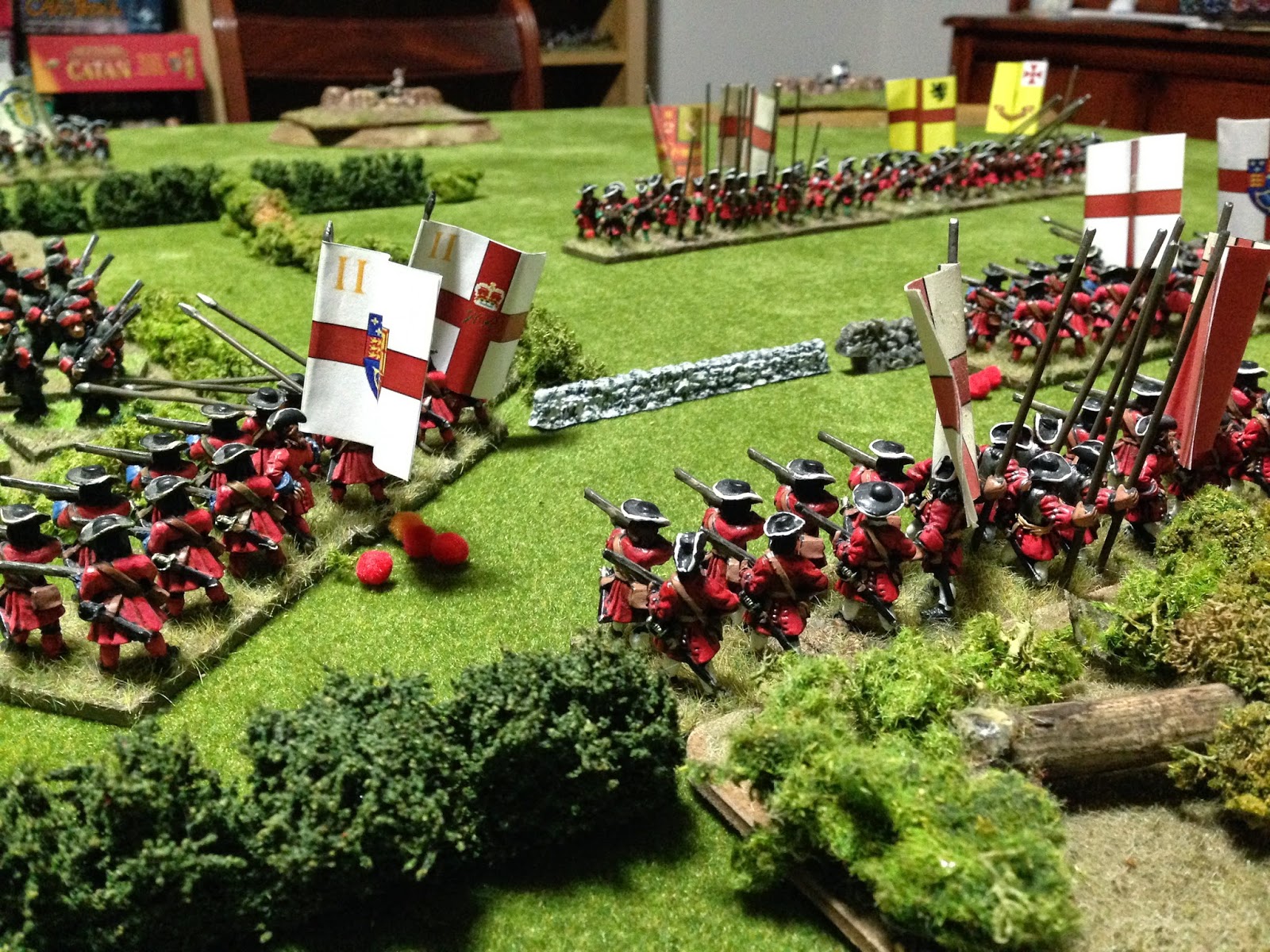 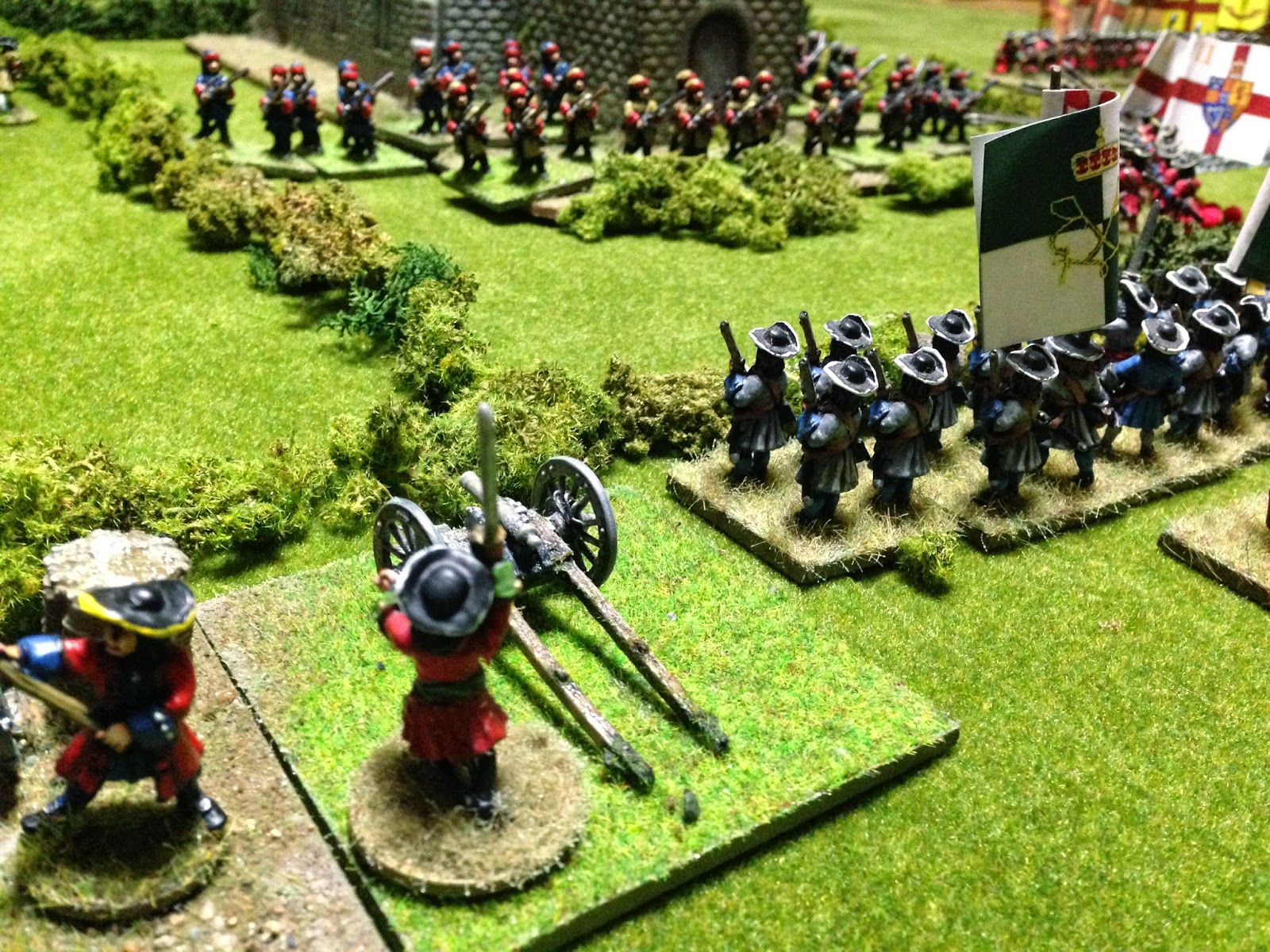 The high water marks of the French attack are the ground taken in the centre... 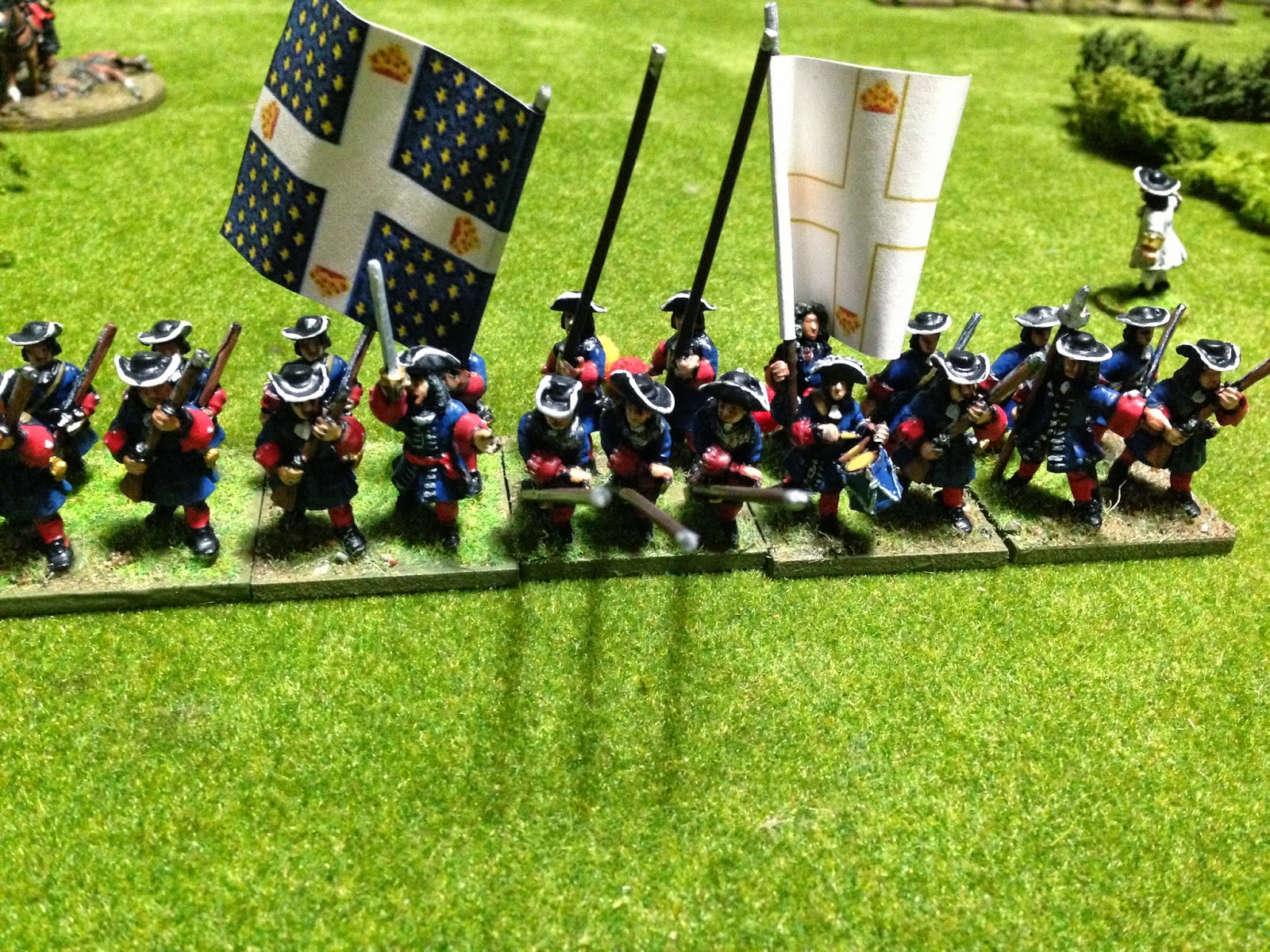 ...and the gloire of the Gardes Francais , (although they're about to be forced to take a break test due to withering fire from the Dutch). 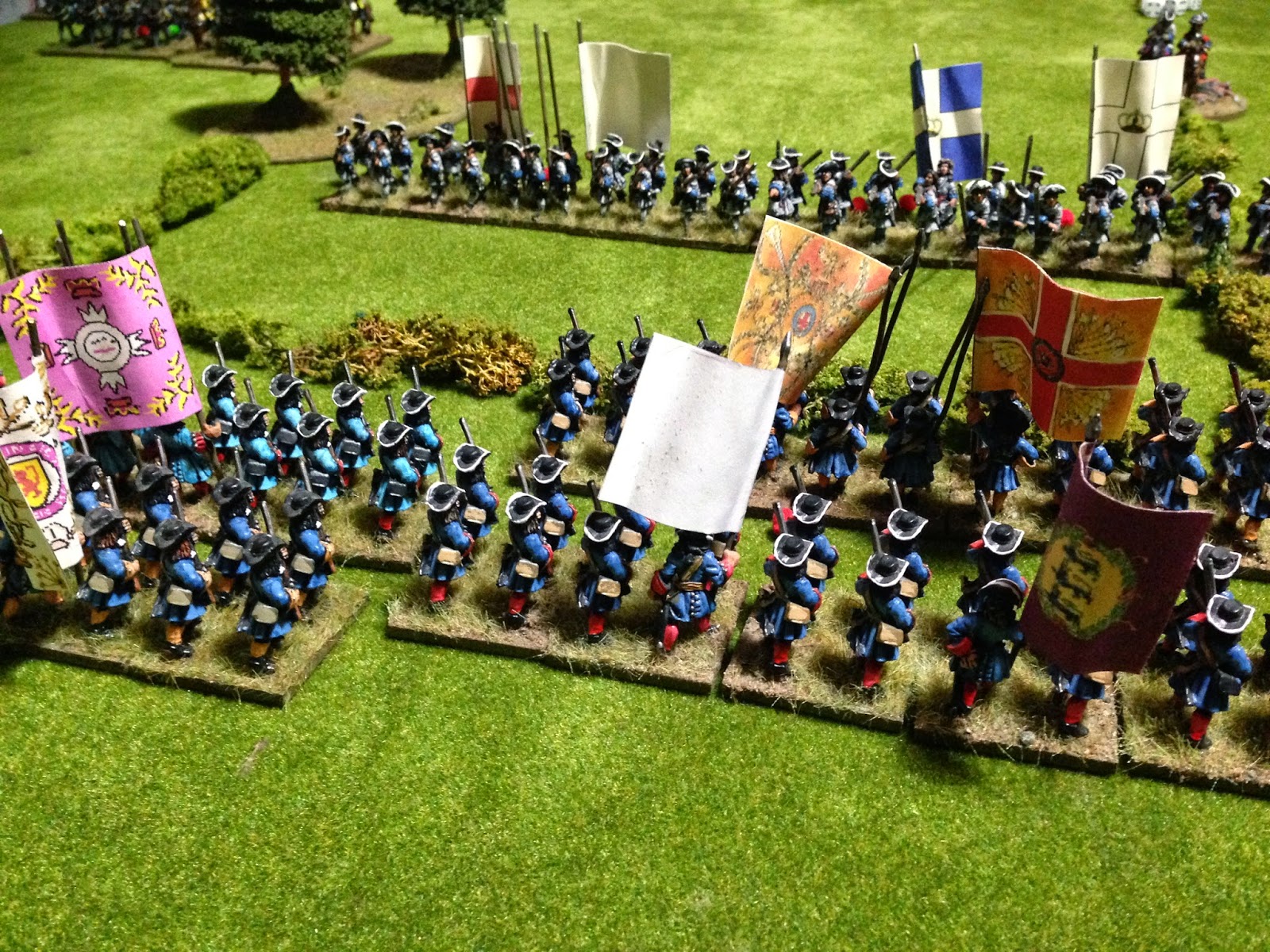 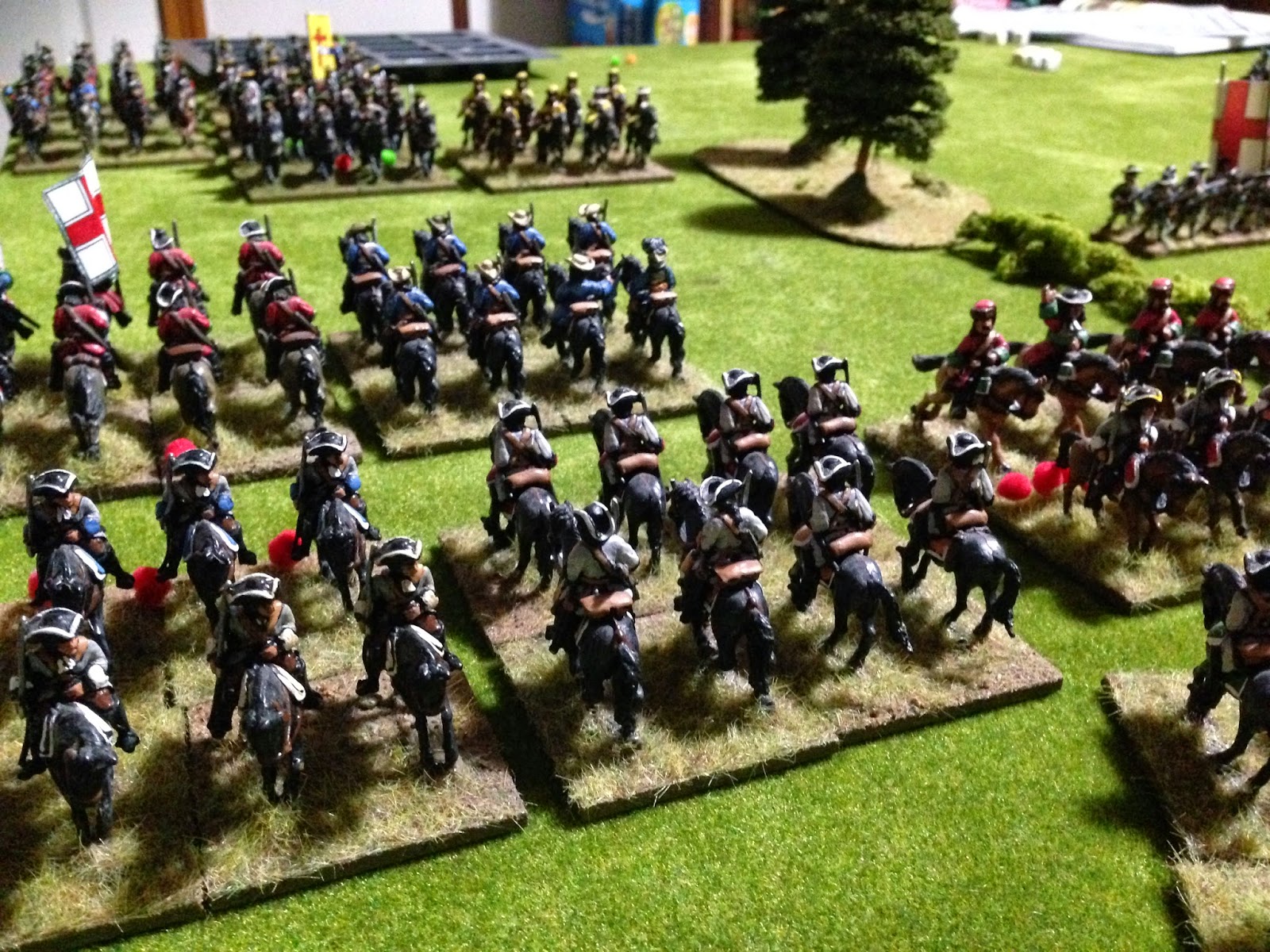 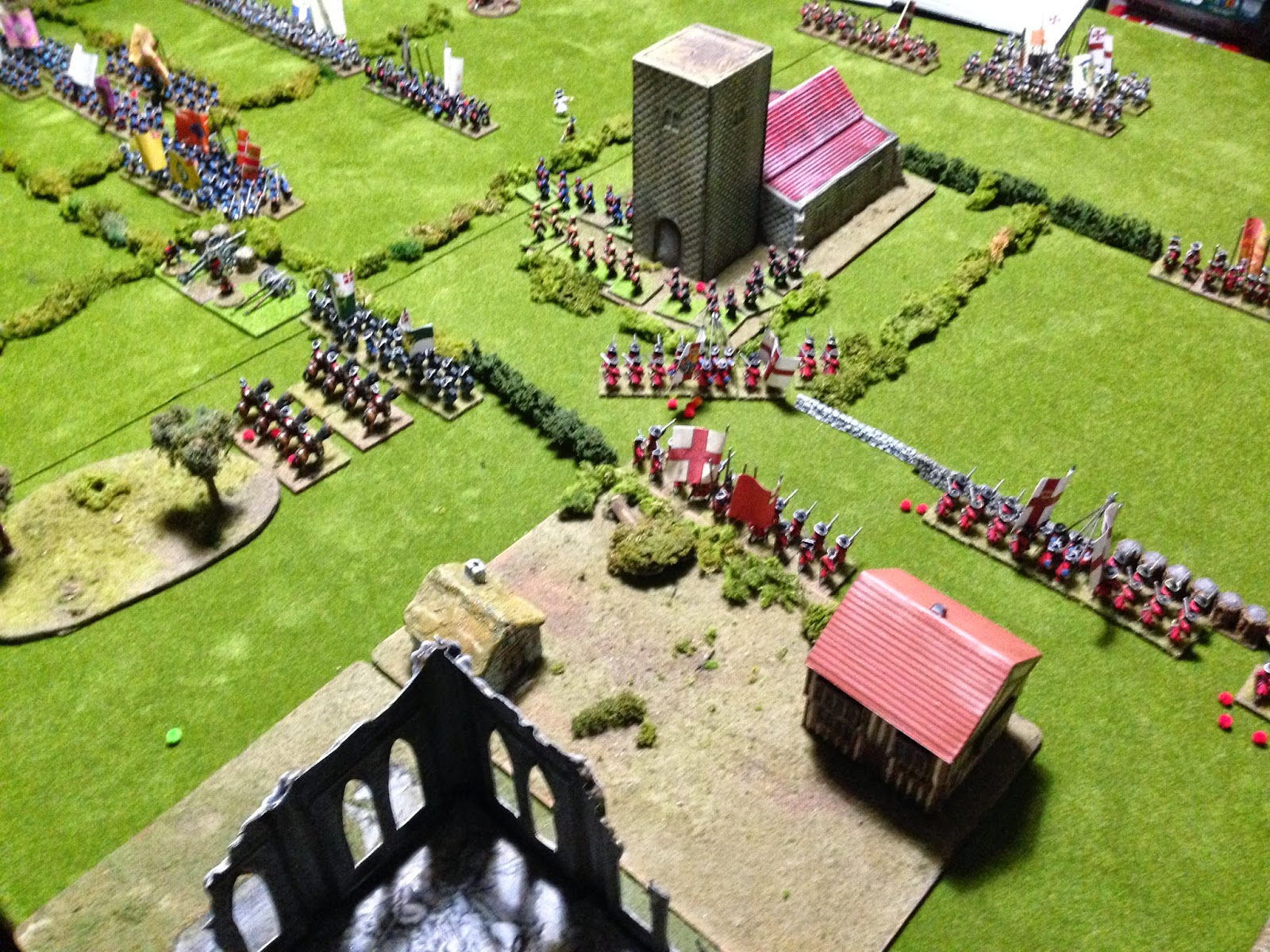 We didn't get a proper resolution to the scenario (although it was definitely going the Allies' way), and the rules will need a little more testing before using again - but all in all, a nice set and not too restrictive - although the command activation could use a little development. Having said that, we've probably been swayed a lot by the battlefield management style play of Maurice. 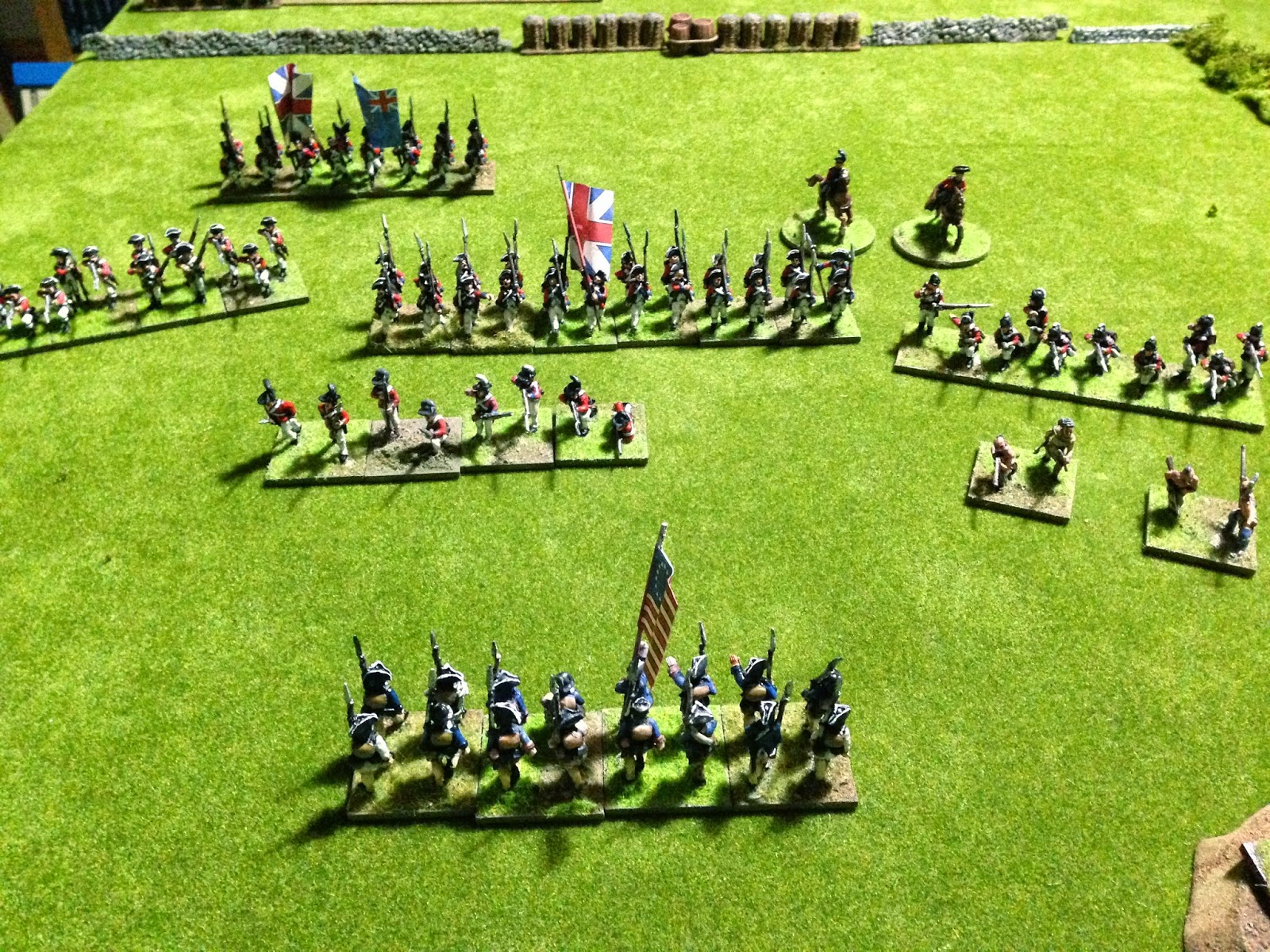 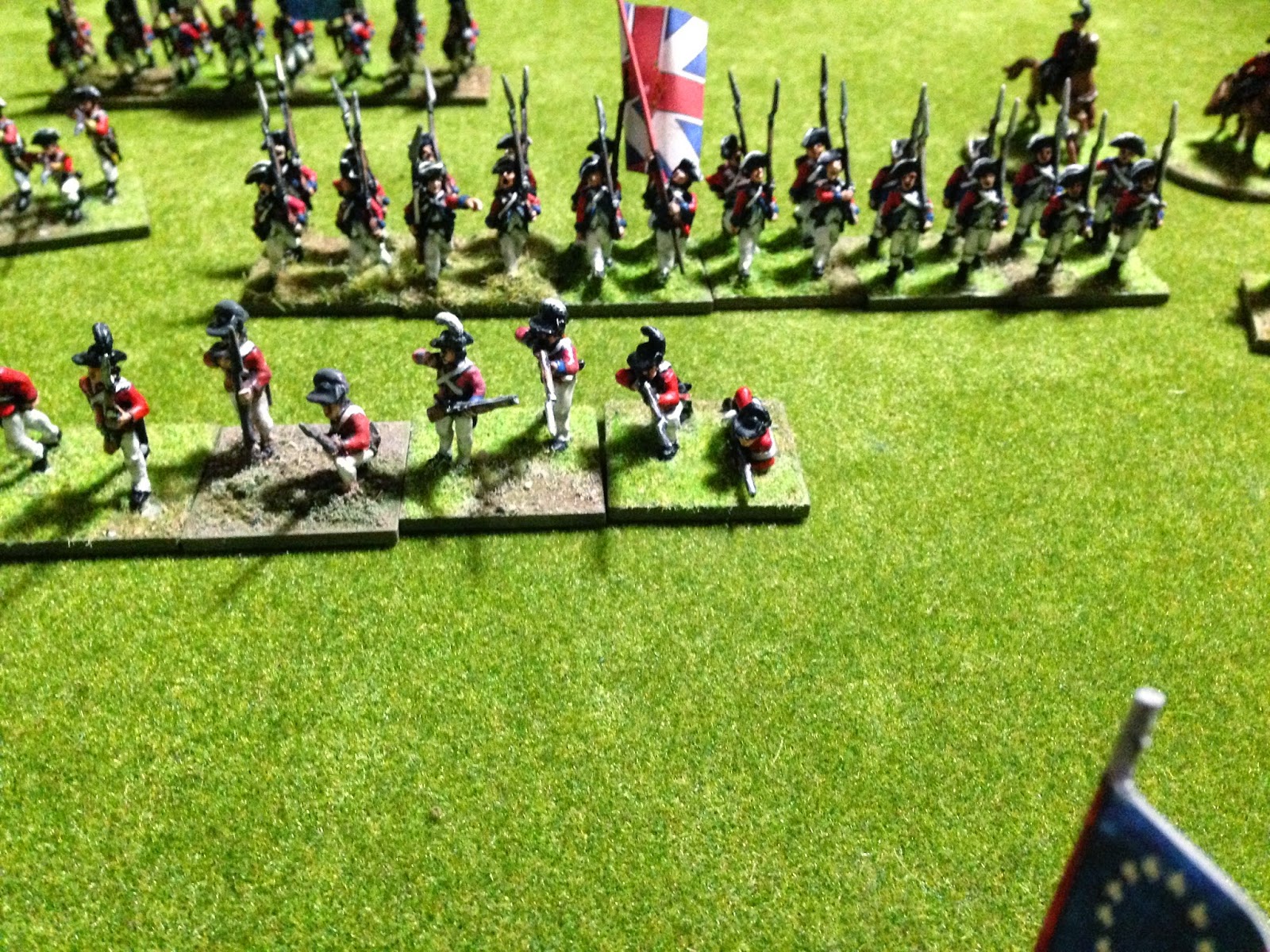 ...while American Revolution troops wait in the wings (yes - keen eyed viewers will note only one American unit painted so far. I'm considering using the 'dip' method for the rest in order to get things moving.) We'll most likely try the Freeman's Farm scenario in the Black Powder rulebook as the first game.