What good are snub fighters going to be against that?


A little late to the party I know, but last night’s game with the ‘Friday Night Phalanx’ was the now famous ‘X-Wing’.

An excellent game as it turned out, with a thorough and yet elegant system, which is easy to pick up and runs the gamut from calculated tactical play - where you are trying to second guess your opponent(s) - right through to more random unplanned events, which keeps things exciting. 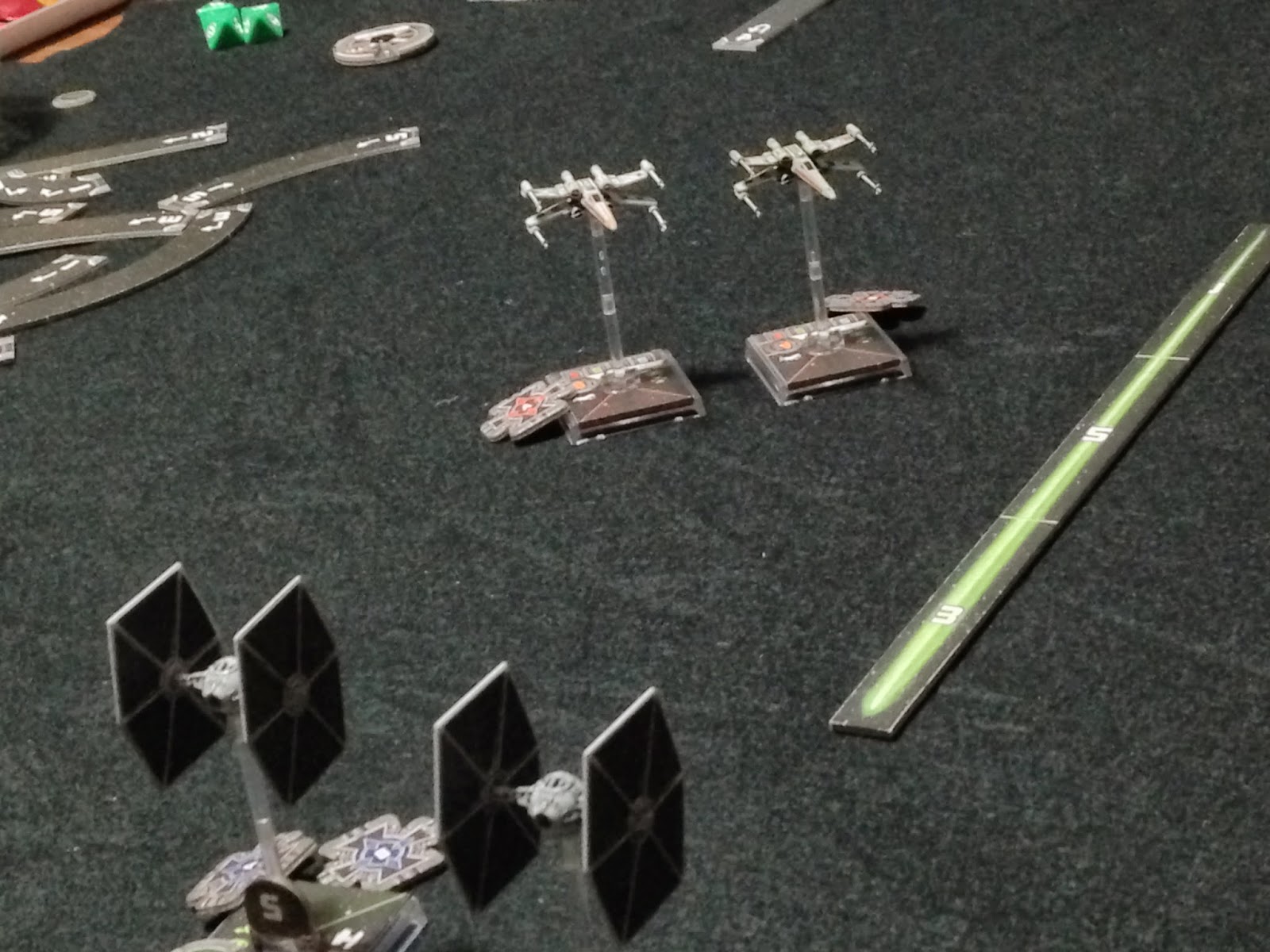 Real bonuses include :
(1)    Components – painted, highly detailed, and assembled to present information and incorporate all tactical information on the stand or card.
(2)    It’s the original trilogy.
(3)    Beautifully integrated dice mechanics and card mechanisms which give a real feel for how we imagine starship combat would be and how we remember Star Wars and Empire in our heads.
(4)    It’s the original trilogy.
(5)    It evokes a real sense of the movies. We were constantly quoting lines from the films (stay on target) as X-Wings swooped in for the kill or TIE fighters massed to swarm an unsuspecting (but apparently well funded) rebel ship. Oh yes, and only Steve can do an accurate TIE fighter ‘screech’.
(6)    Have I mentioned it’s the original trilogy?


We actually were able to play two games in a 3.5 hour window, which is excellent for 4 players.
Pics are a little intense as my hand was shaking with excitement ;) … 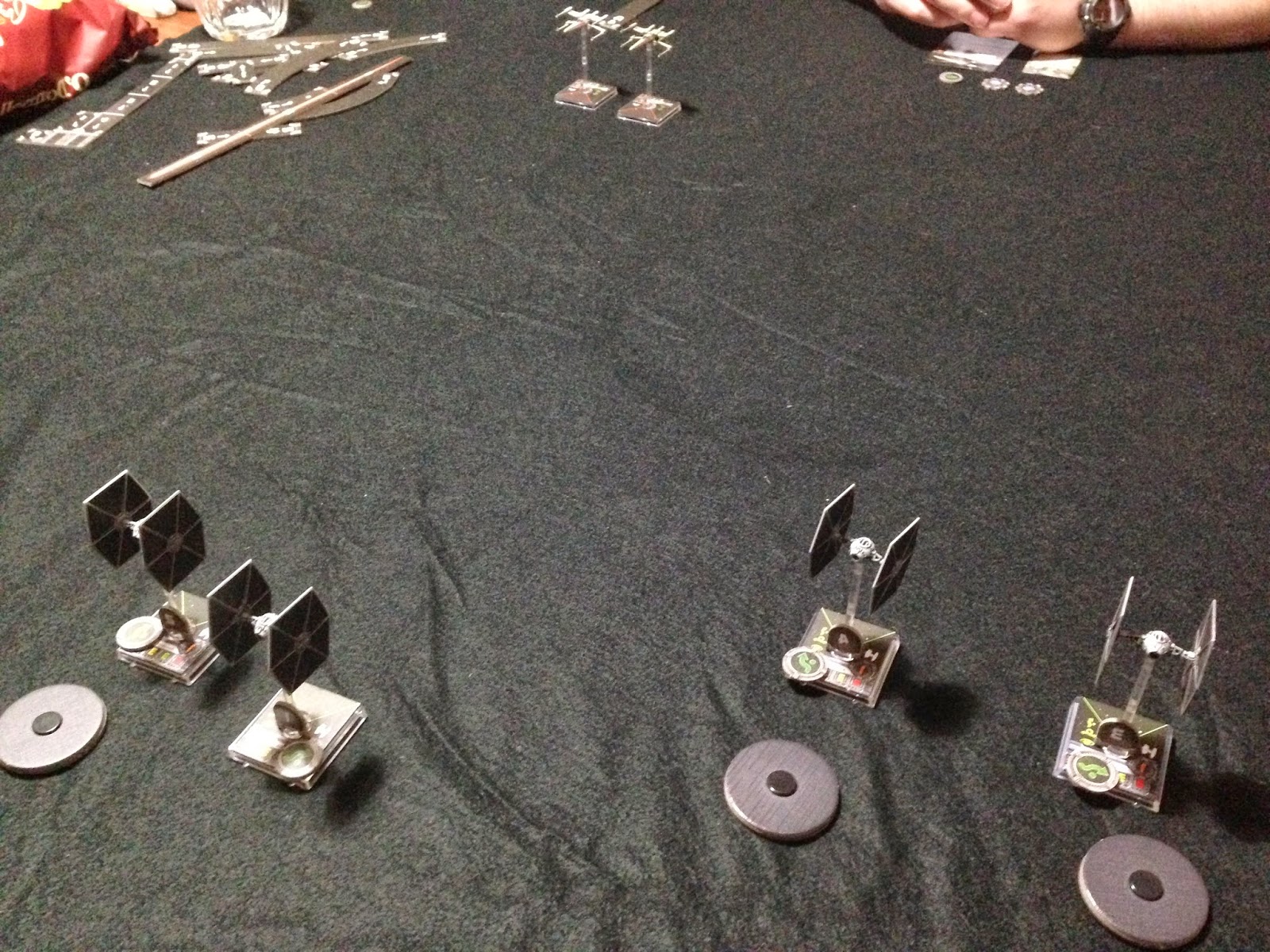 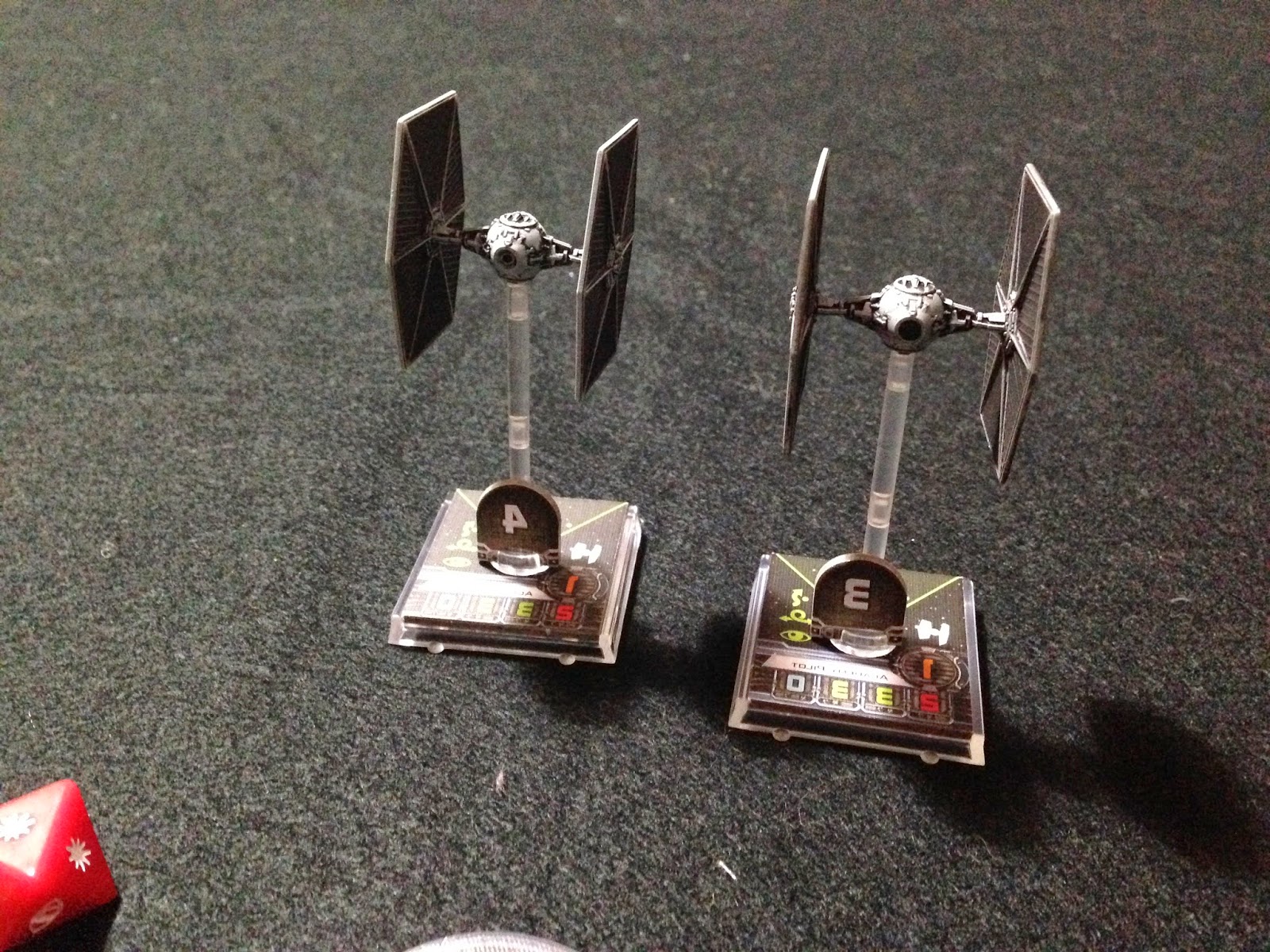 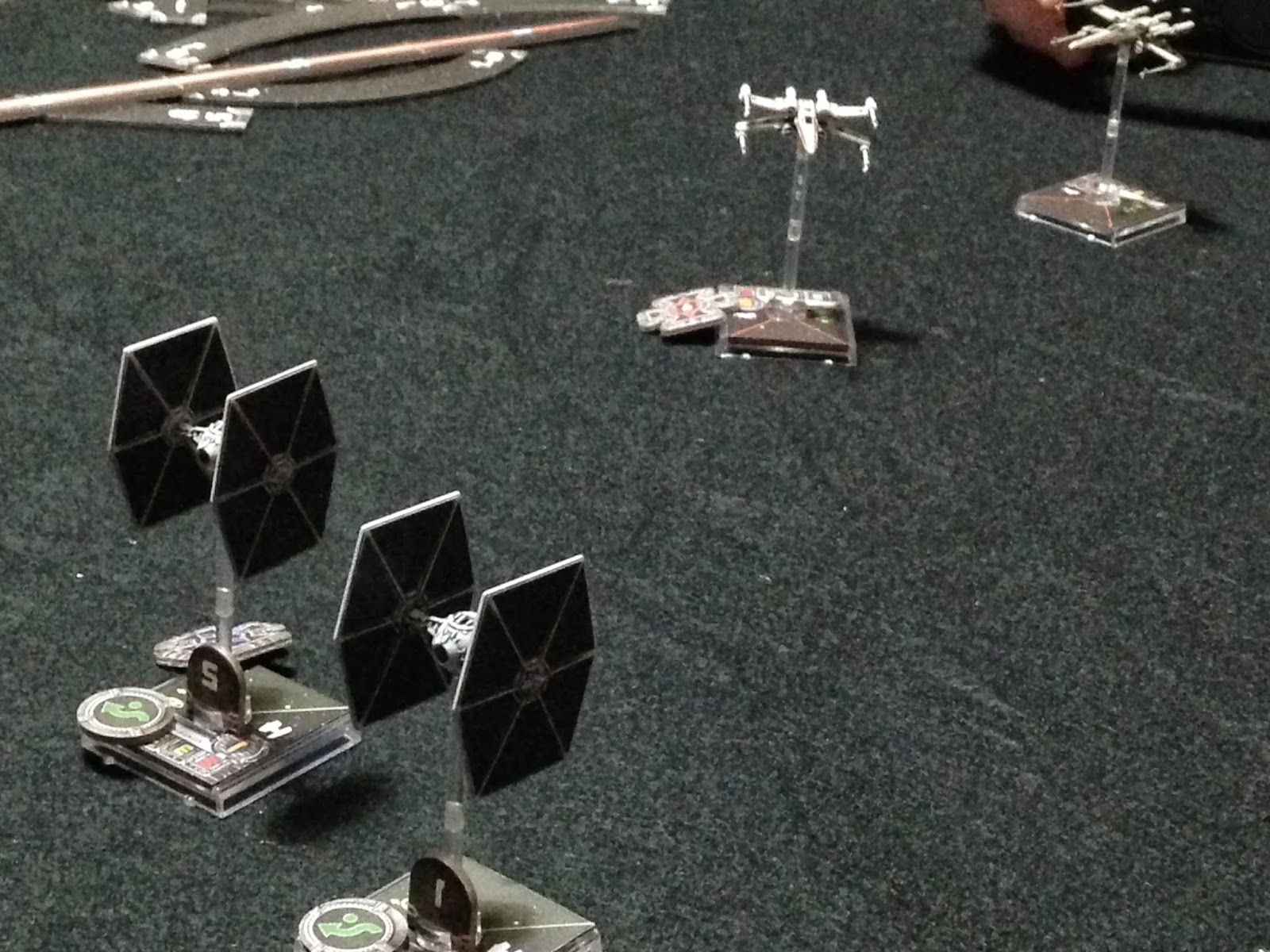 The TIEs take on two X-Wings. It won't be an easy fight; the TIEs have no shields and are basically a bloke in a vac suit with an engine strapped to him (oh yes, and solar panels for some reason). 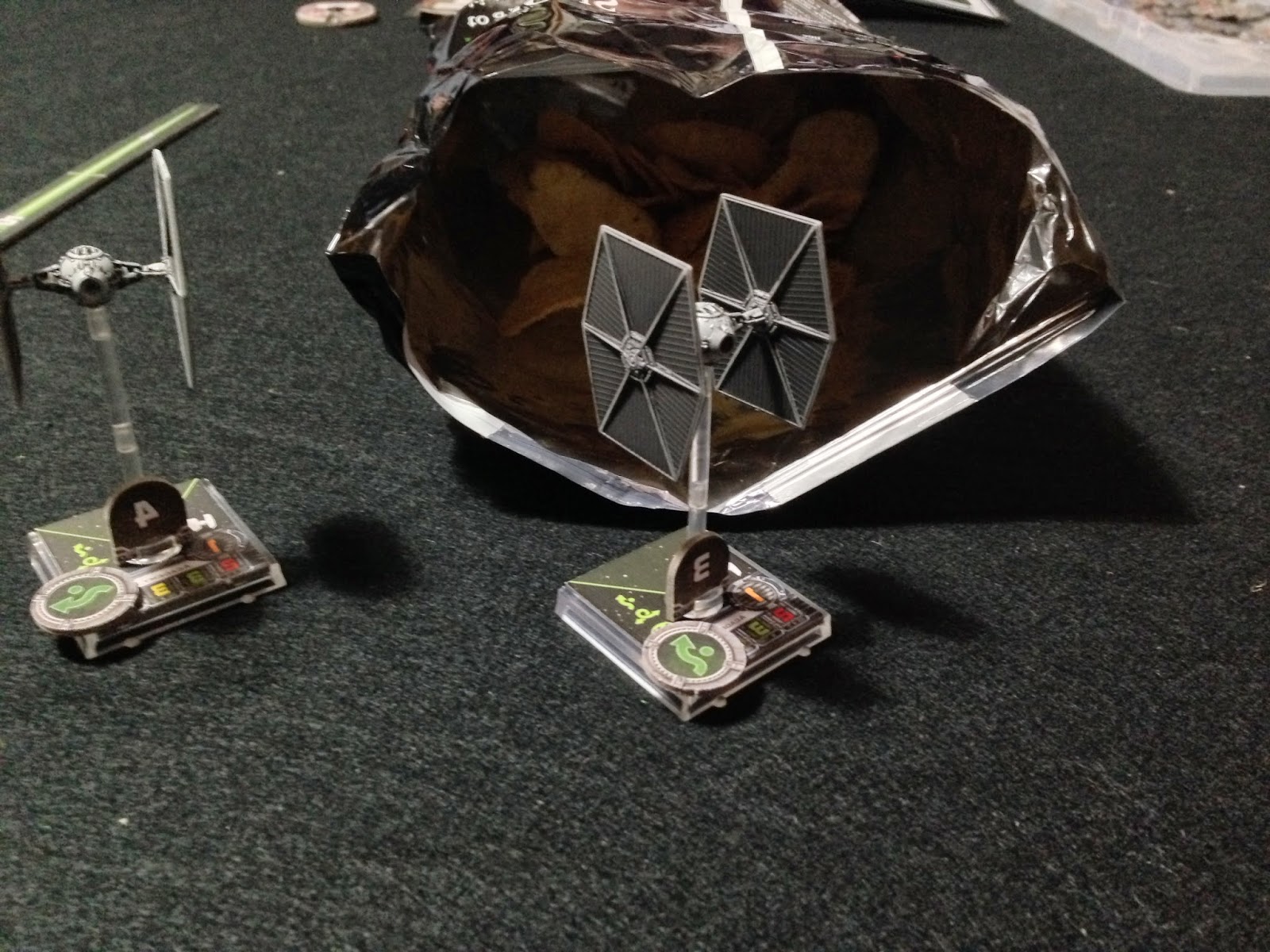 A black hole appears...and it's full of crisps (potato chips for our American viewers). 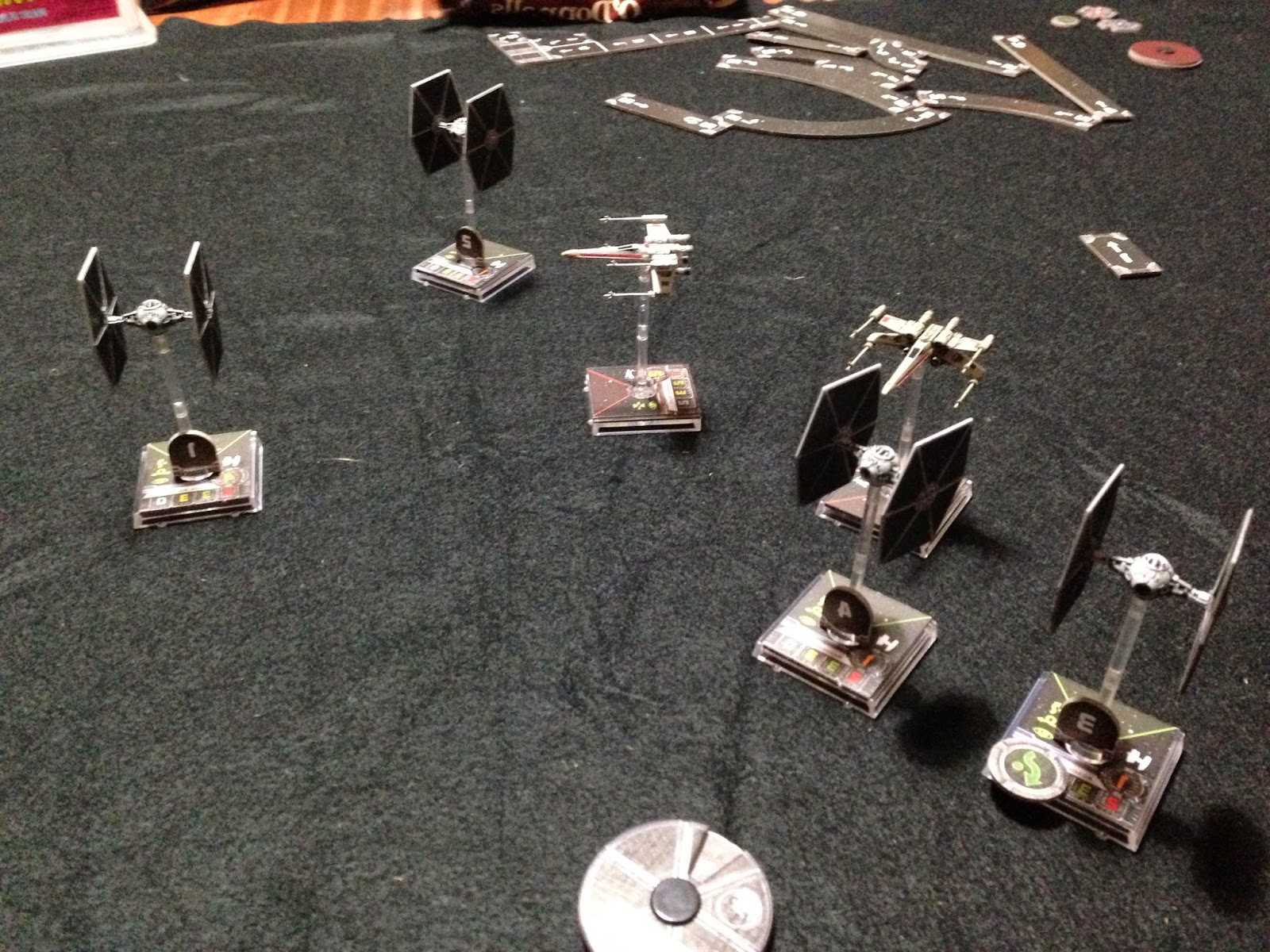 The action begins. X-Wings are robust, with shields, so if they can take down some TIE Fighters quickly, they can take the initiative. 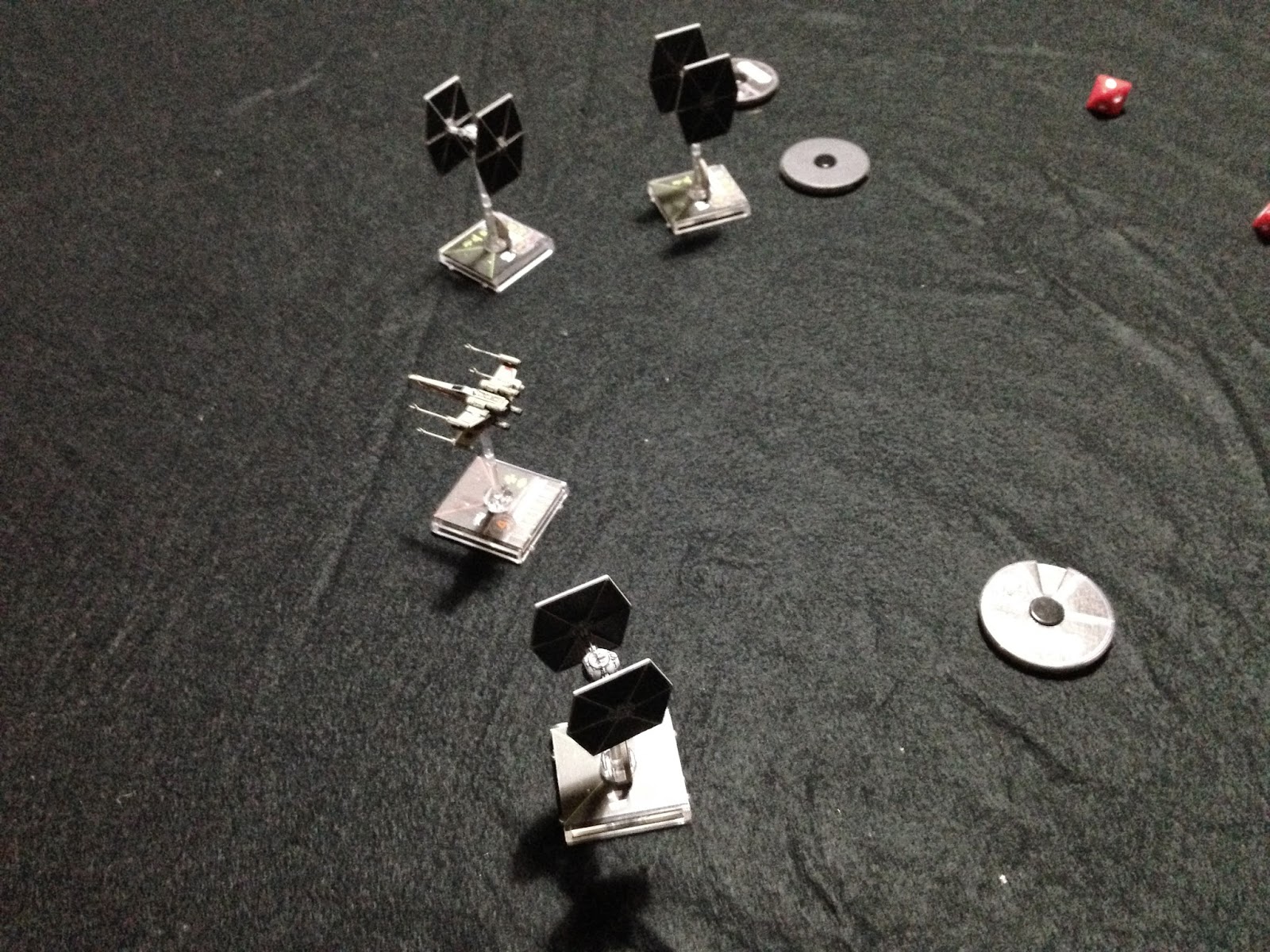 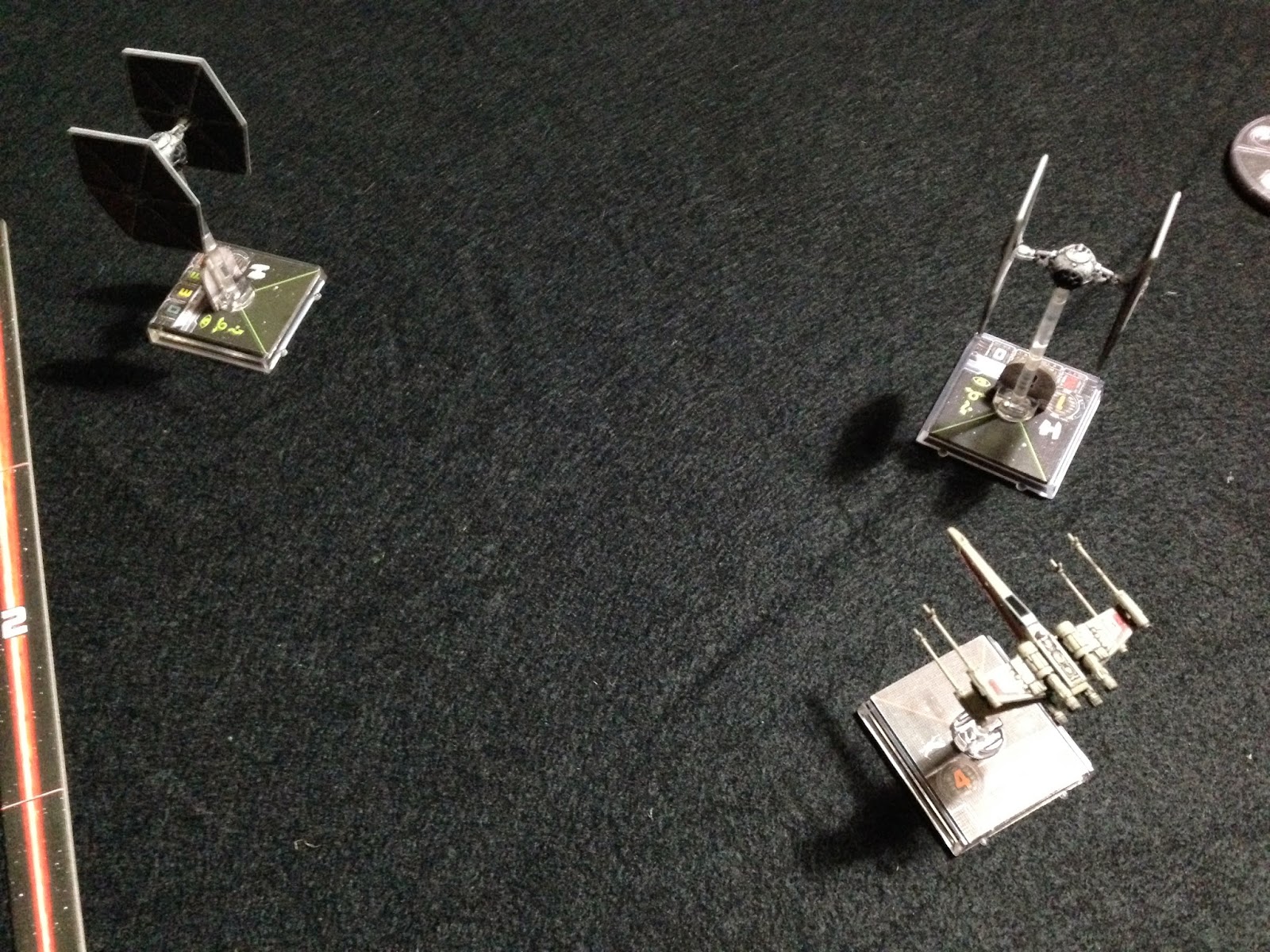 In the end however, after taking out one X-Wing, the remaining TIEs are able to swarm the lone rebel. 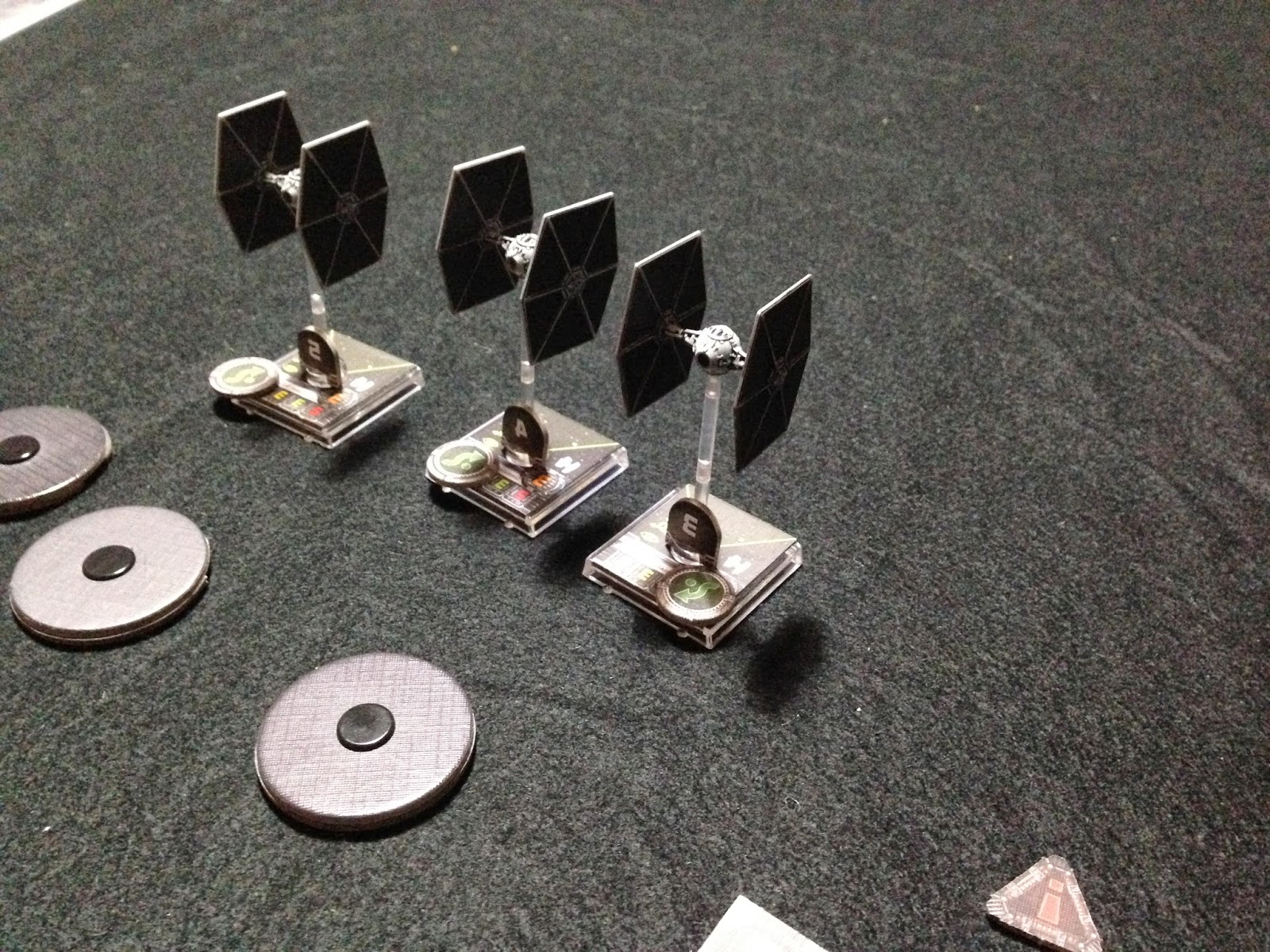 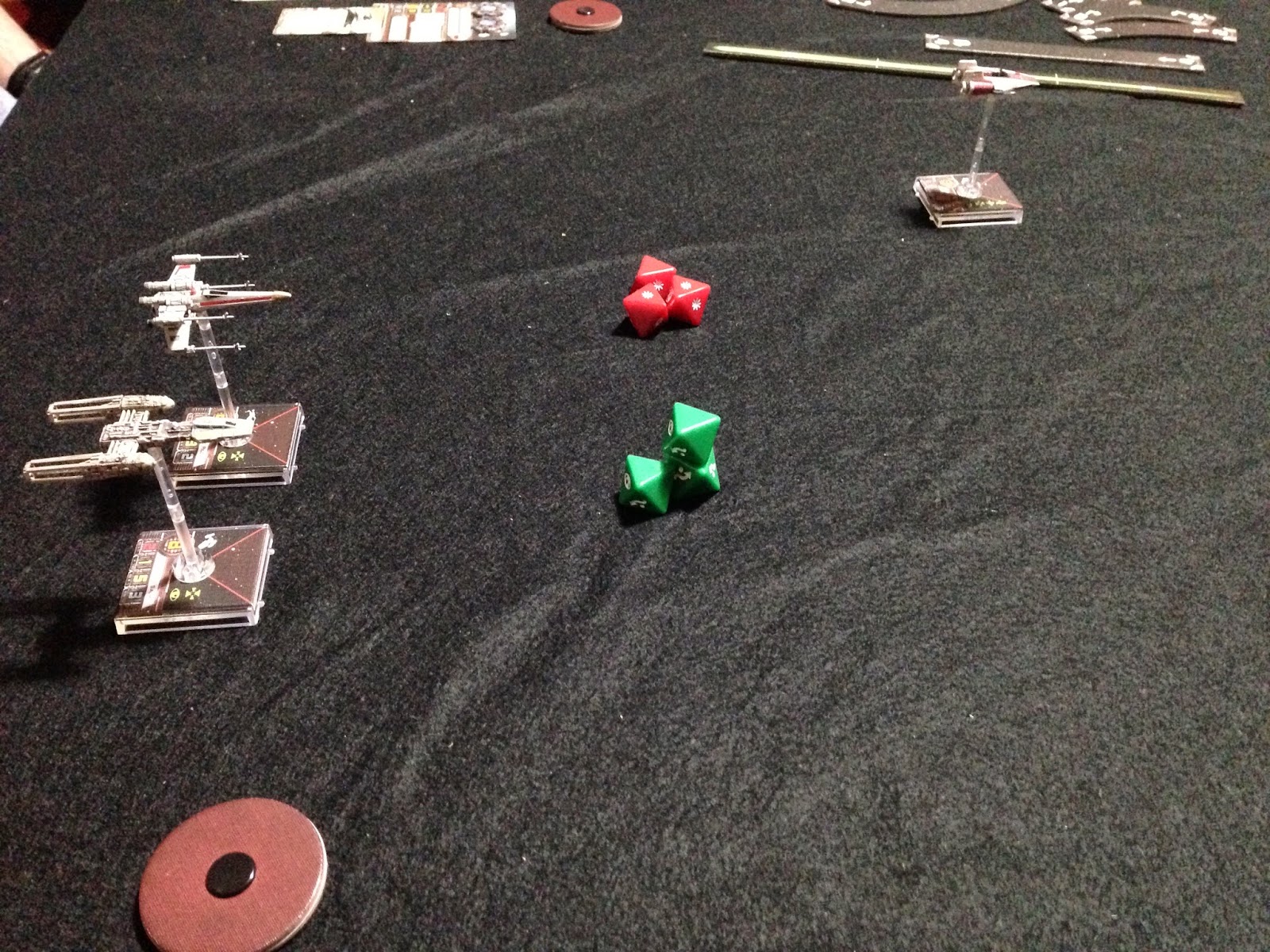 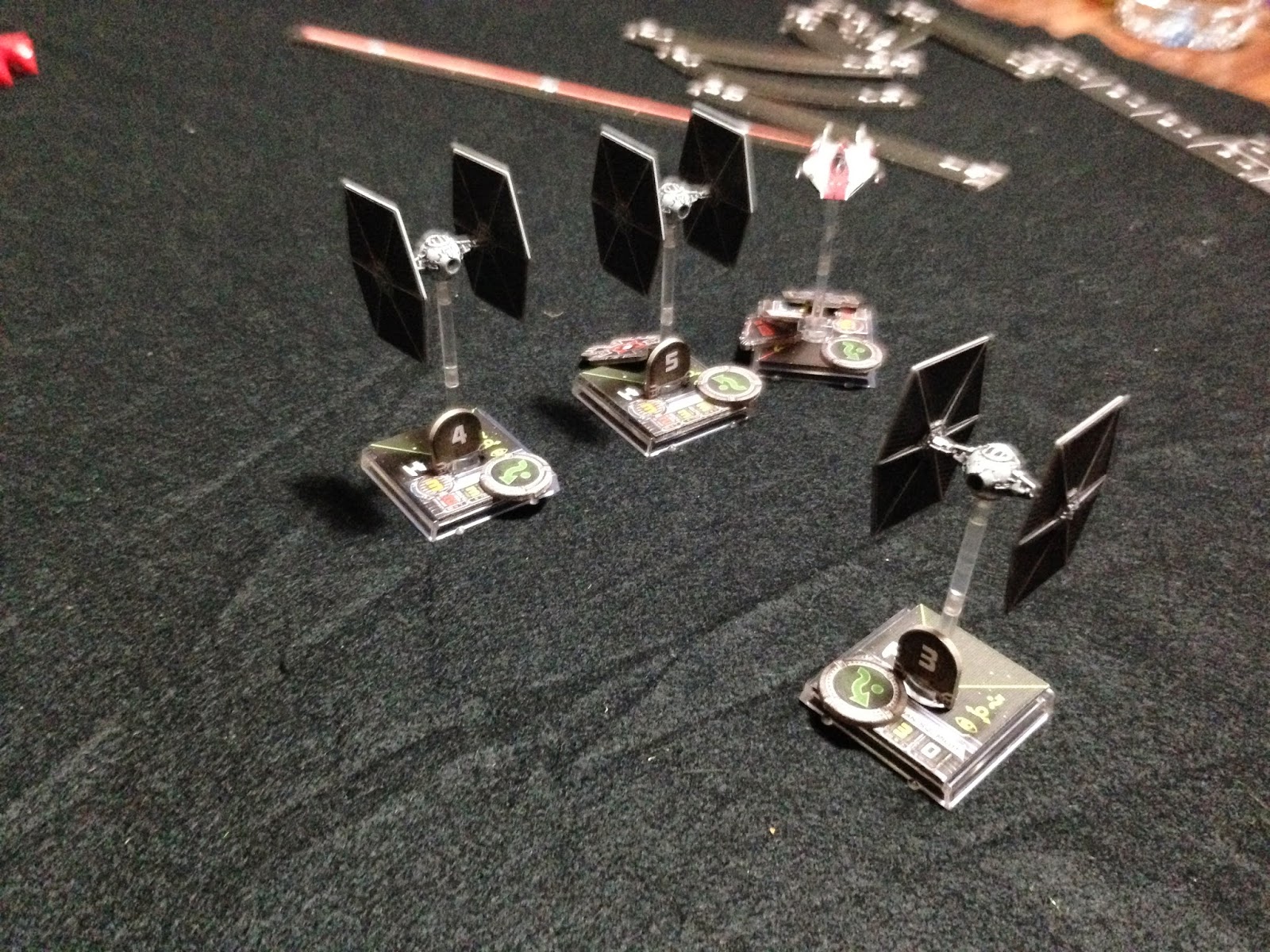 The pesky A wing gets busy right away, darting around like a colonial Viper (oops, wrong intellectual property) 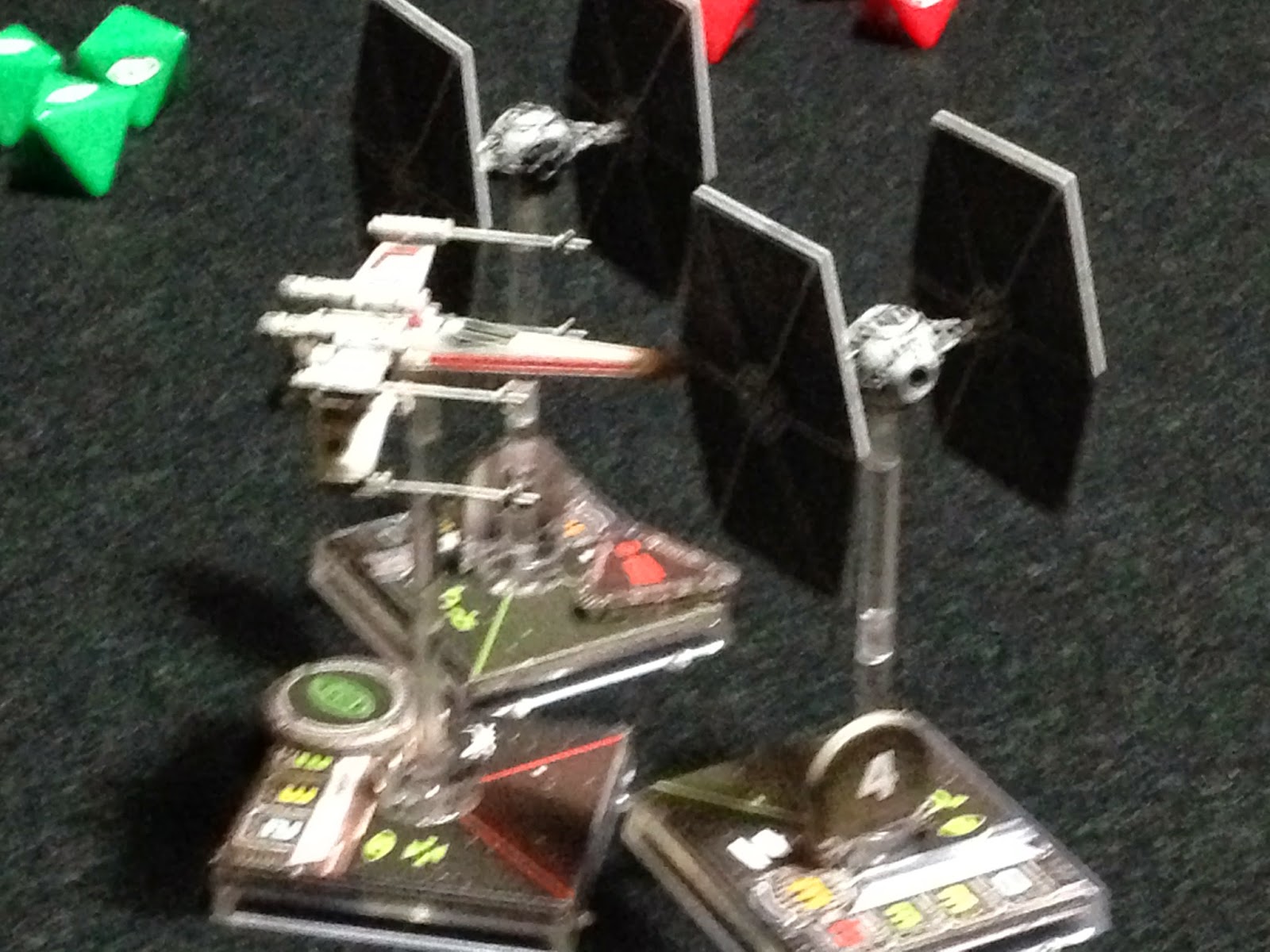 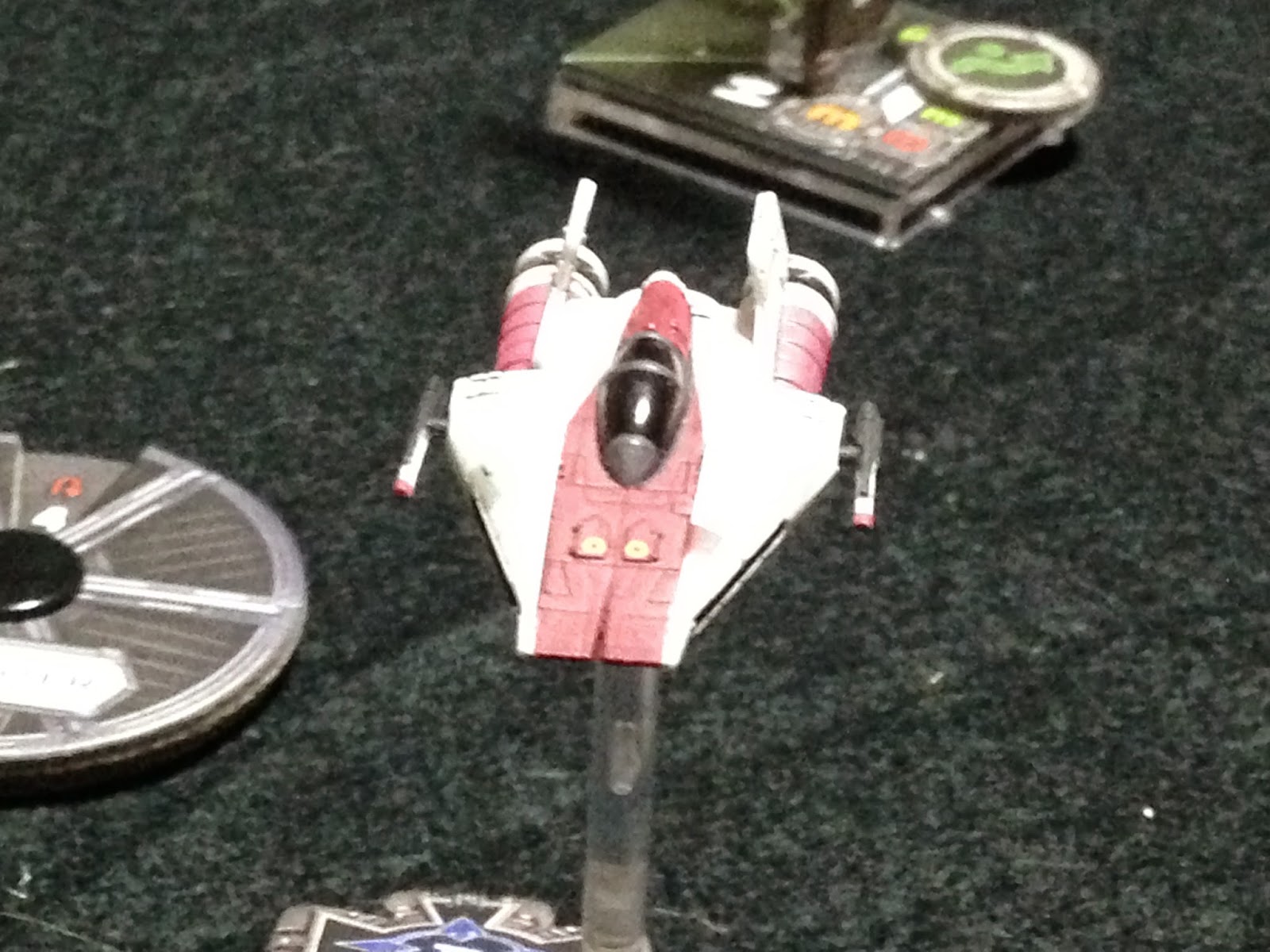 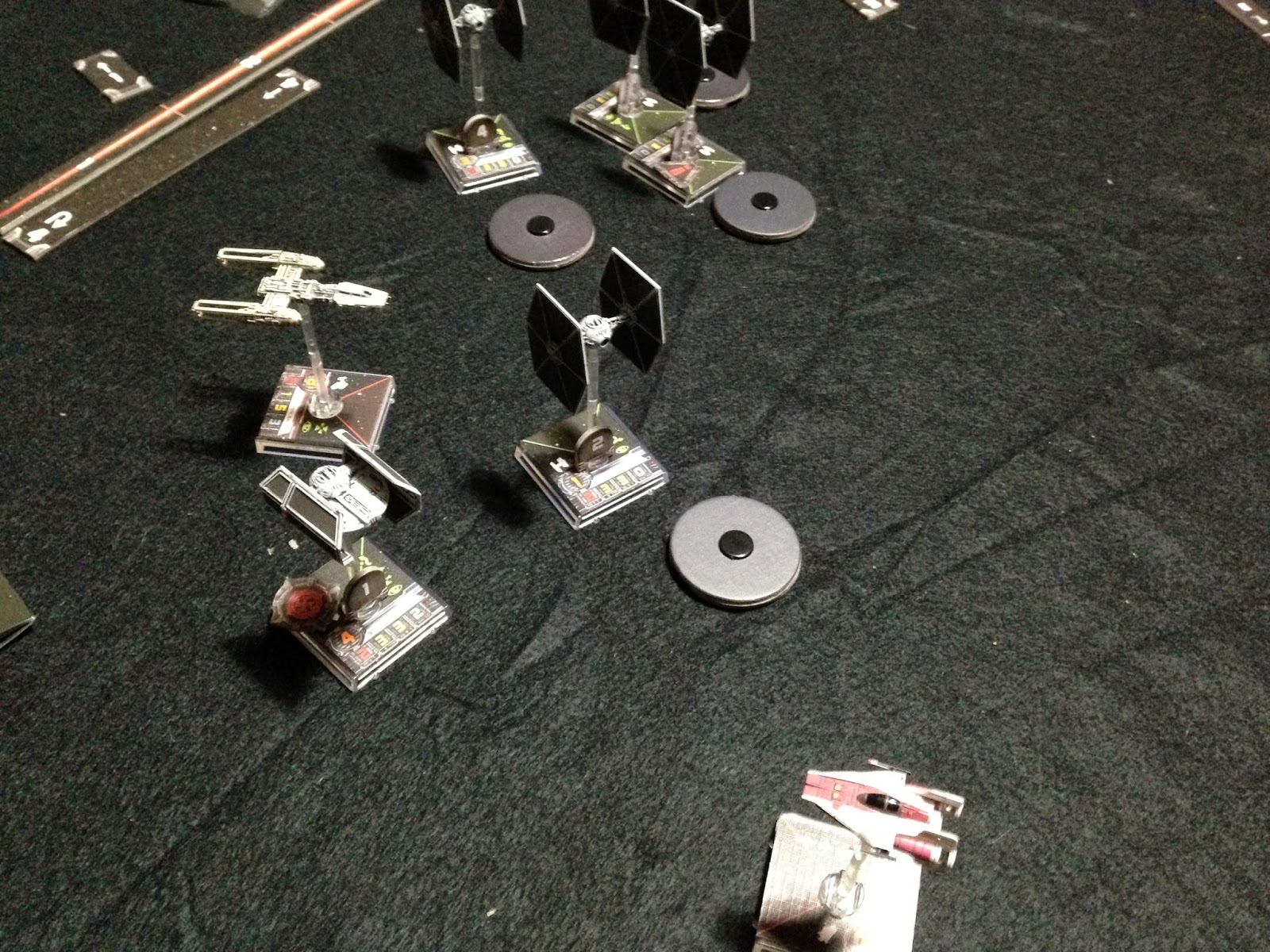 The Advanced and his wingman take on the tank like Y-Wing, with its 5 hits. (It's Shermans vs Tiger) 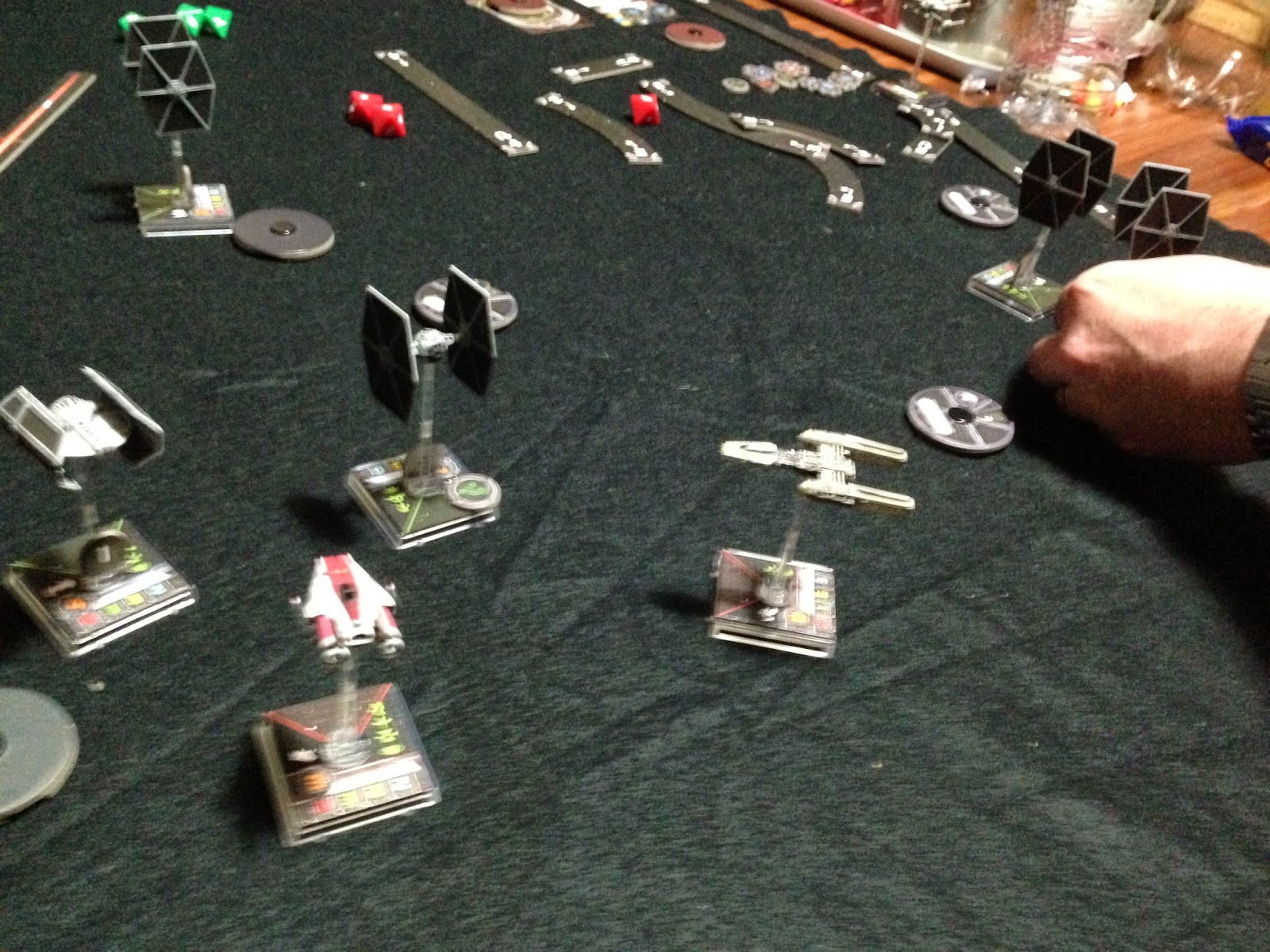 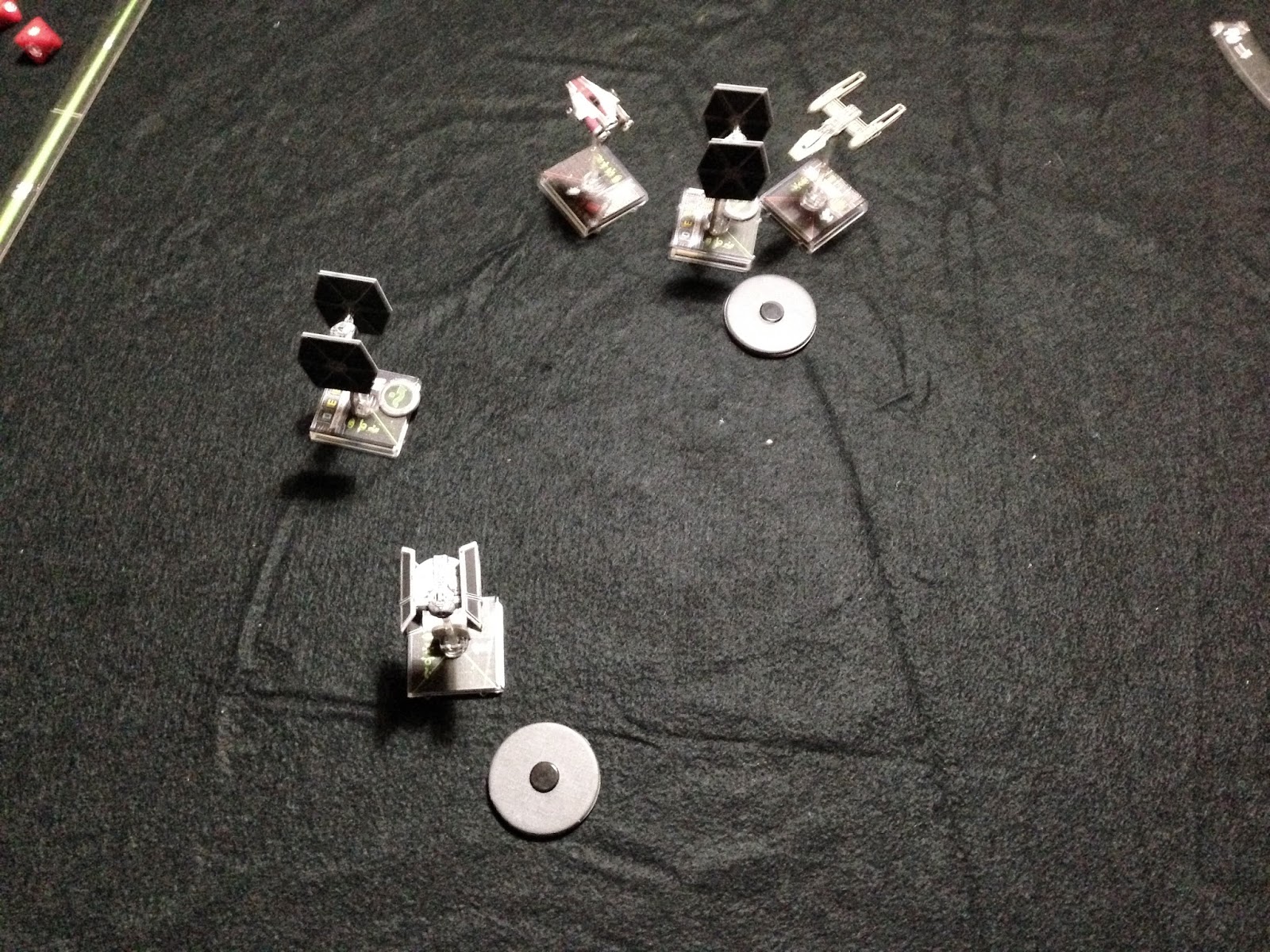 With the X-Wing gone in a freak strike, the rebels have to rely on the robust Y and the agile A 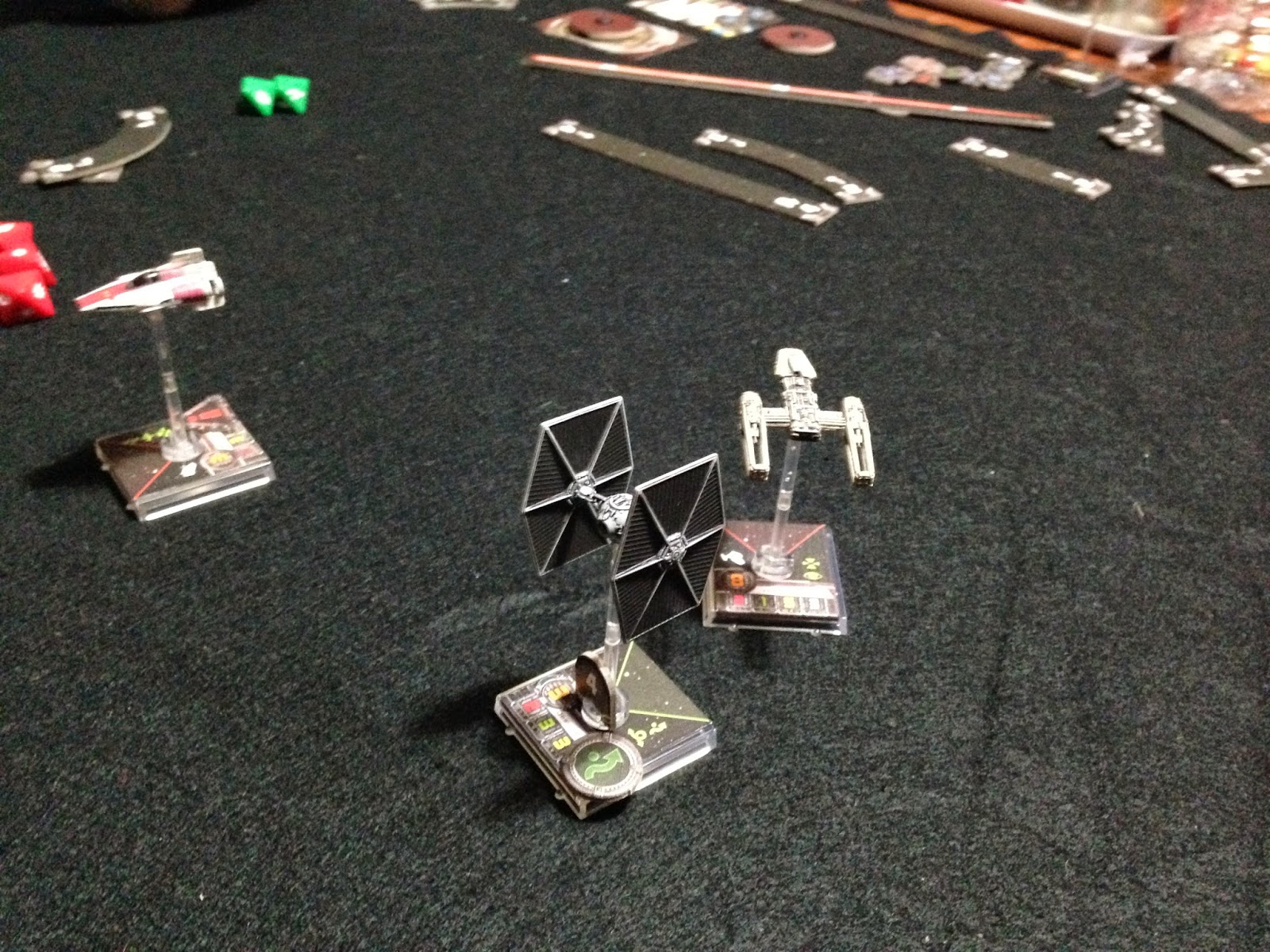 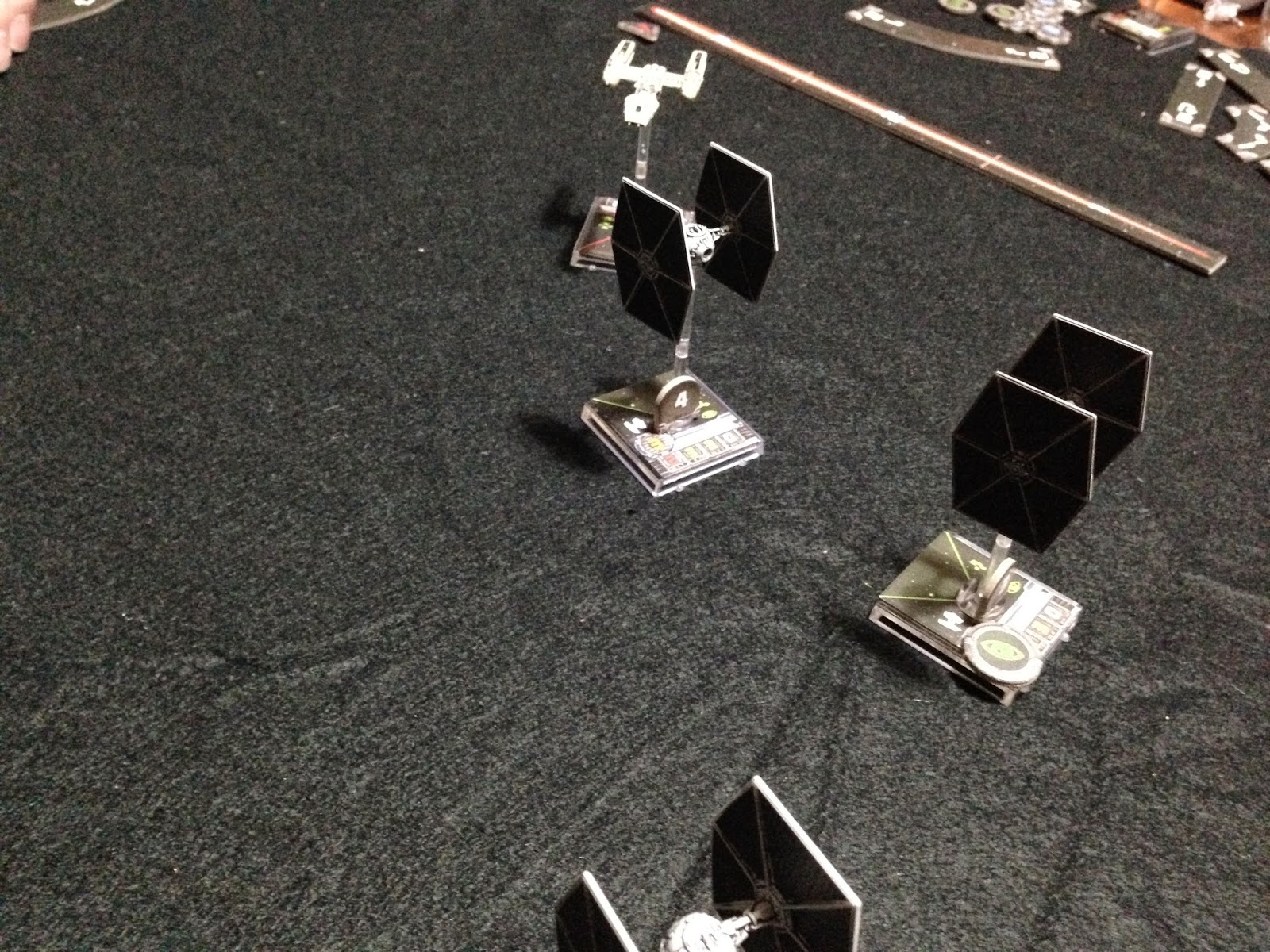 ...but the Y can only take so much punishment... 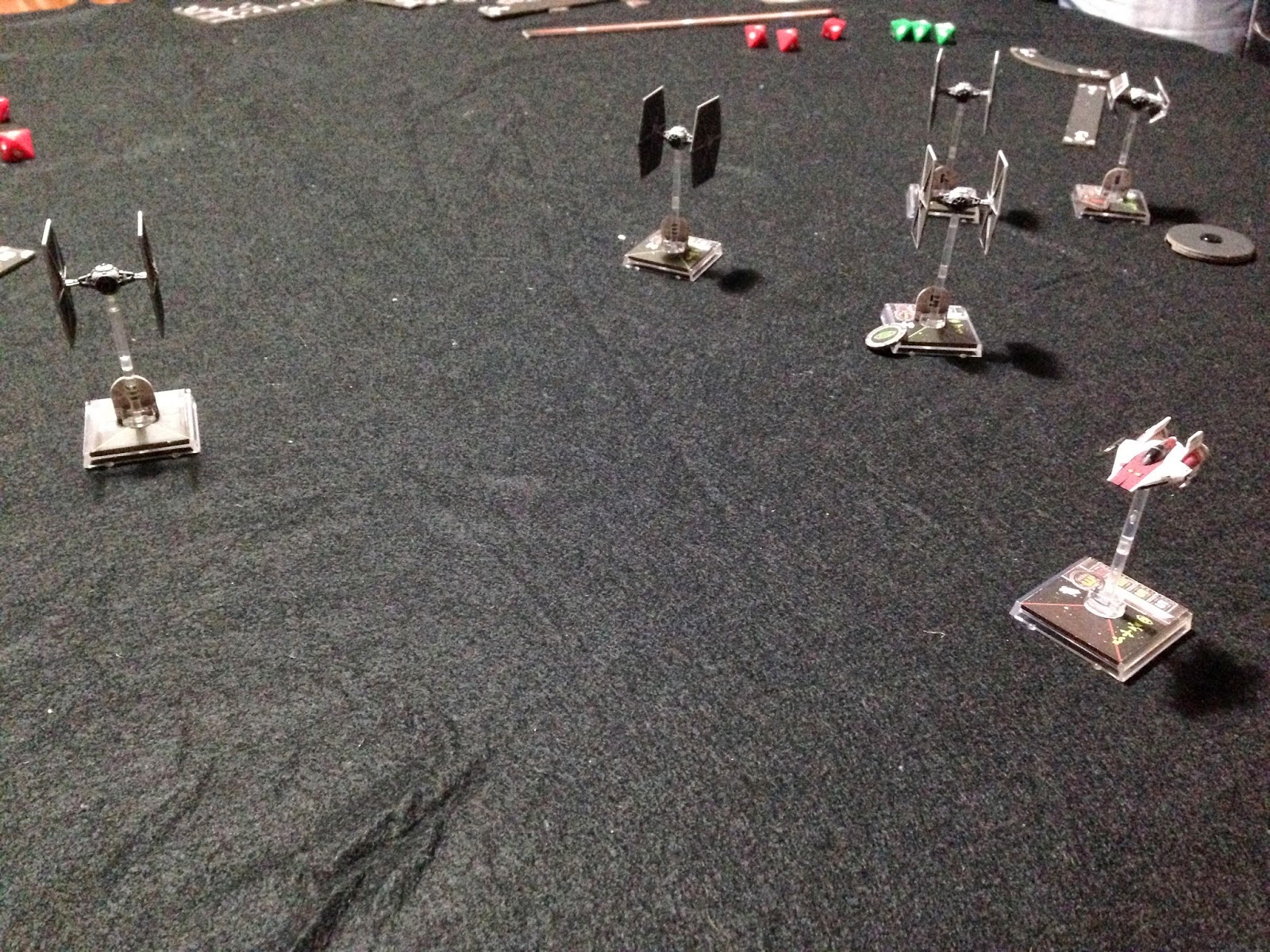 ...before all attention turns to the A. 'Here they come.' 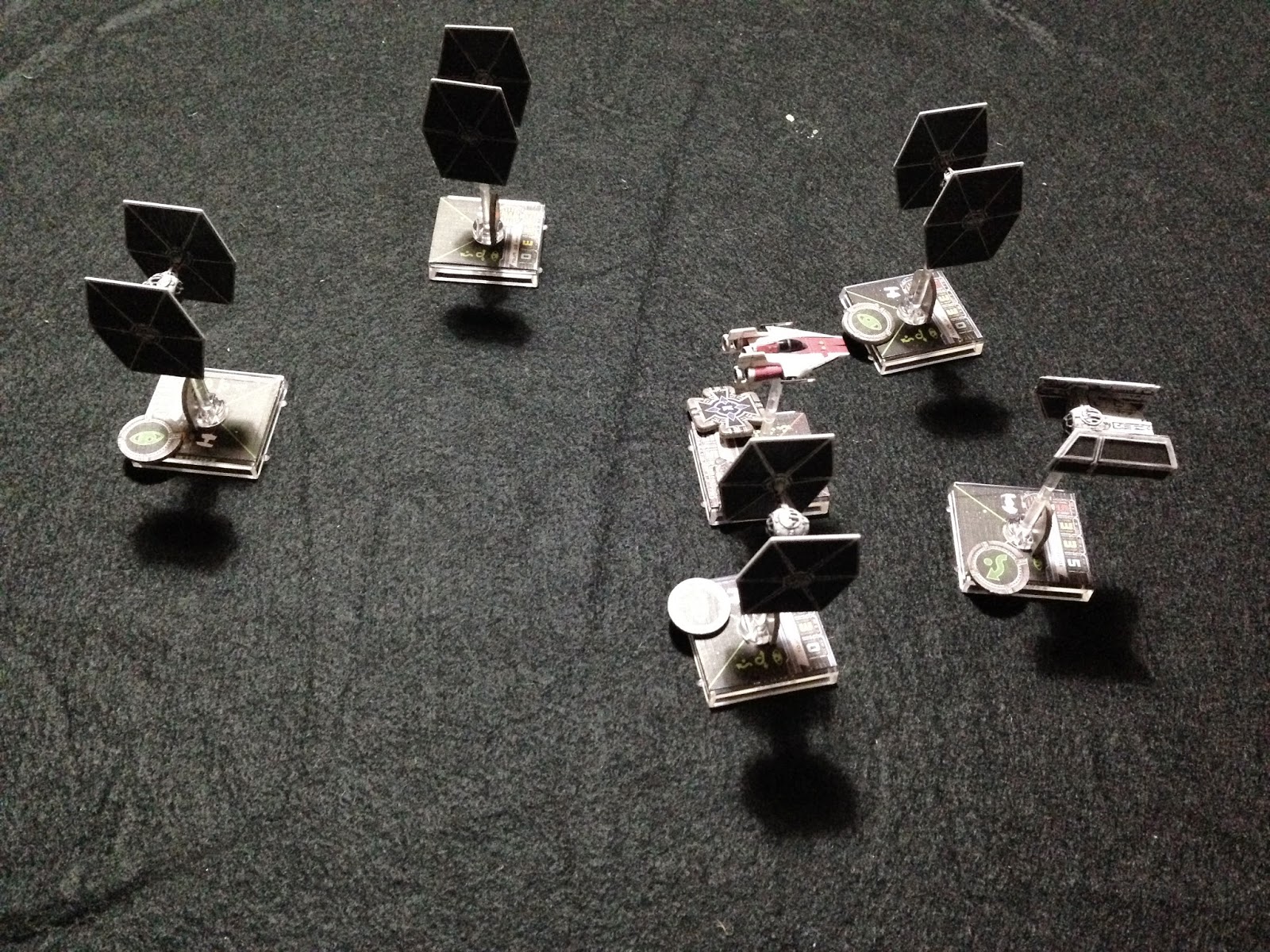 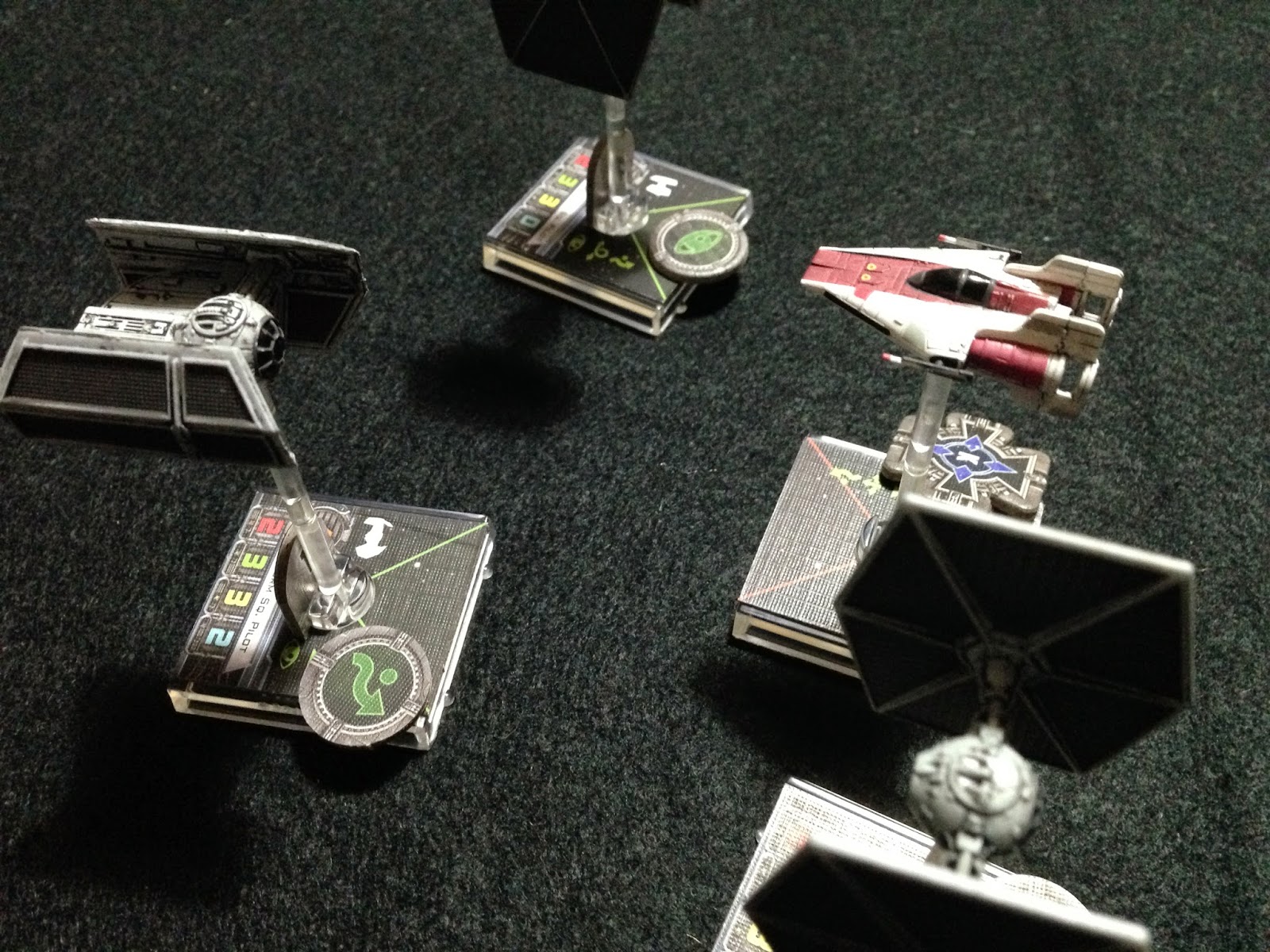 Bad dice rolls for the A Wing, as its hopes of at least taking out the Advanced are dashed, and it succumbs to numbers.
***
A lot more to come of this one then with some larger games and potentially a campaign of sorts with rebels trying to destroy imperial prototypes, Imperials trying to find the rebel base and…ahem…an apparently ragtag band of so called ‘rebels’ (who appear to be quite well funded I might add) using hit and run tactics and deceit to provoke unwarranted attacks against the just, yet wholly misunderstood, Imperial authority in the galaxy.

All we are trying to do is end this destructive conflict...and bring order to the galaxy.

Where’s that damned planet killer? We should get a name for it…You know? The big, grey, dangerous, death globe star thing…That’s it! We should call it, the ‘Dangerous Globe’!
Posted by Duc de Gobin at 04:40 1 comment:

Email ThisBlogThis!Share to TwitterShare to FacebookShare to Pinterest
Labels: X-Wing 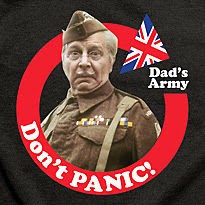 As posted previously,  I like to scare the living daylights out of myself by actually posting the state of the nation , errr painting table. 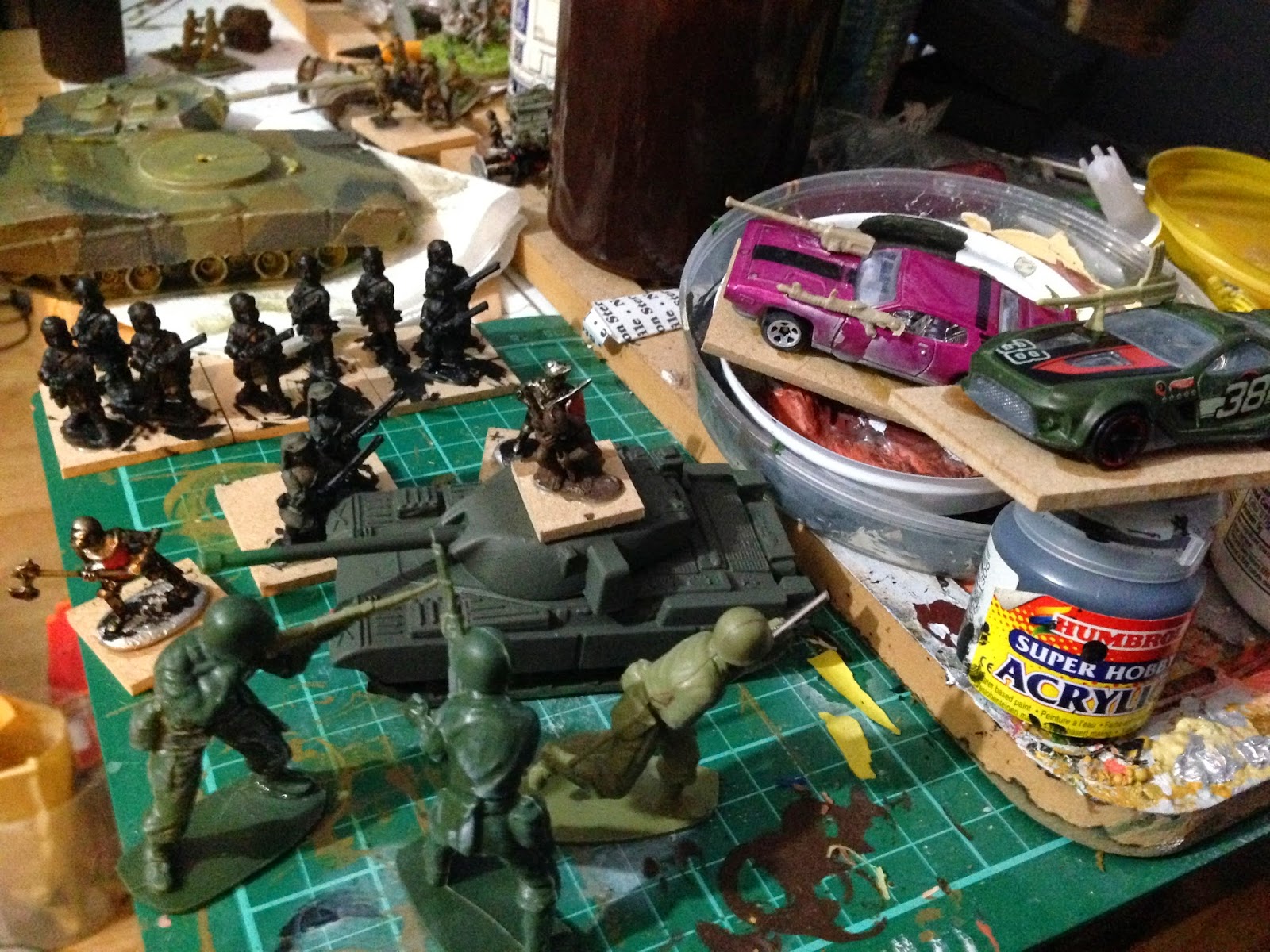 (1) the number of projects that have been, started...but not as Magnus would have said, actually finished.
(2) projects which seemed shiny at the time time but never got off the ground
(3) random regiments which need to be finished for a larger game, but of course distraction prevails.

No wonder I never get anything actually done!