Time for some more RFR - and with a great scenario book from Steve Shan over at the Nations in Arms blog.

'The Seelow Heights, a Wargamer's Guide' is an excellent, full colour scenario book for Rapid Fire. I would say this is better even than the official Rapid Fire stuff, as there are rule amendments for the theatre (hit-and-run variant for German armour units is particularly effective, and changes to Panzerfaust availability etc. etc.), better historical content and improved layout. 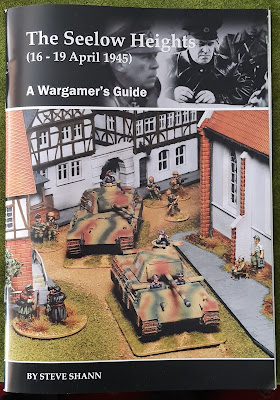 The battle itself was the April 16th 1945 scenario - 'Across the Haupt Graben' - a very tough ask for Soviet forces, despite their numerical superiority.

Also seeing more and more to like in RFR - especially when I see some of Steve's hacks in action.

The battle was not entirely finished, though with Soviet victory conditions dictating they either capture the eastern part of the table, or get 4 AFVs across the river, it was easy to see how a stalwart defence in depth had worked.
Great rules, and great scenario book. Recommended.
Posted by Duc de Gobin at 06:37