While most bloggers are using the first post of 2023 to display their early year paint jobs, I instead rebased my 15mm Seven Years War stuff for Volley and Bayonet.

Now, I don't have a lot of 15mm, but I remember buying the earliest figures here (Matchlock Miniatures) in the 1990s when 'Last of the Mohicans' came out, with a view to French & Indian War action.

To that end, they were only ever used for a Quebec 1763 game with WRG rules in mind but Canadian Wargames Group rules played. 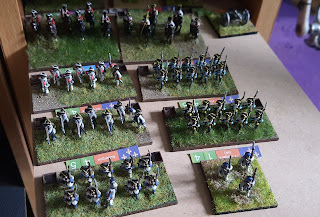 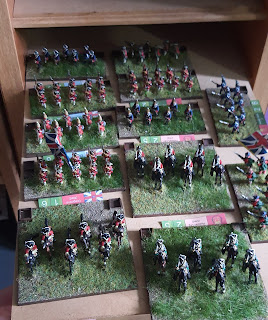 There are also some Lancashire Games and Frei Korps figures in there for good measure, but here's the rub...

These figures were originally based in the nineties - on single and collective 3/8" per figure cardboard;

Well, as the kidz say this days, 'I like the aesthetic' of the chunky V&B base for one, and I'm trying to get back into it as a multi-player, multi-period standard when Field of Battle will not do. Granted, having a lot of 3mm MDF which I got cut to various sizes many years ago, most certainly helps too.

And dammit...I have to say, aside from task of leveraging PVA stuck figures off their old bases, without a risk assessment, and the chance of slicing a finger off or losing an eye - I actually enjoy rebasing?!?! The new flock always looks good, for a while...

In other news, I recently sold this 1989 boardgame on boardgamegeek: 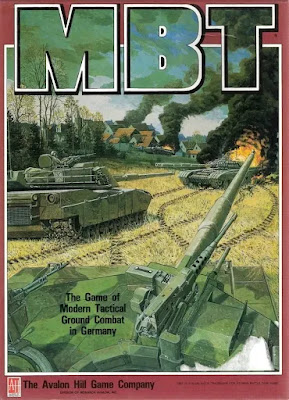 I bought this in 1989, and despite still being a fan of WW3 wargaming, I have never even punched the counters out (and the scenarios are a bit crap anyway). Then of course, complex rules seemed to be the best way to (1) simulate modern combat, (2) impress your friends. Of course, now that I can't be bothered, there are invariably better ways to (1) simulate both the quasi-realities AND required 'gamey' elements of modern warfare, as we're all a lot smarter now and (2) I scarcely read rules which require heavy investment, and have little interest in them.
Hence a renewed interest in systems like GDW's 'First Battle', which does the same thing as MBT in my view, and even more renewed interest in attributing operation points to systems like this (which Steve is doing with PanzerBlitzHack).
My youngest daughter has been playing this video game (Valkyria Chronicles below) over Christmas (it was about 4 quid on Steam), which incredibly uses a similar operational system - the video game element involves moving characters and/or tanks under restricted action points - but the map element reminds you of 'ops points' for unit actions and 'action points' for individuals as they move and how they might be used. You can move an element 2 or 3 points, but your command/ops points thereby dwindle for doing other things.
Yes, it's an Anime ww2 crossover (fictional Europa vs the Russian Empire; based on the Russo Finnish war I think - with mad manga) but even video game designers have been 'thinking outside the turn sequence'. Don't laugh, but this game has every single modern wargaming turn sequence mutation, that we have felt so proud about in recent years, and it came out in 2008. Granted, most of these companies have designers who are wargamers on staff, so it all works.
(There was now to follow the video for 'it's all about the Bass' (see what I did there?) This 'pastiche' version of the original song has been chosen as it is more 'aesthetically pleasing' (trust me...no really, trust me). I hope I'm proud of myself)...
Posted by Duc de Gobin at 05:10

Email ThisBlogThis!Share to TwitterShare to FacebookShare to Pinterest
Labels: 15mm, State of the Nation, WWIII