Just finished a game of Beneath the Lily Banners with Sgt Seiner; an interesting set of rules indeed. 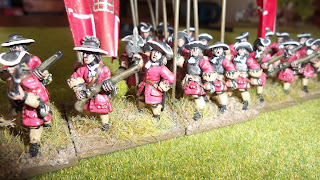 Great to see real period flavour, though there were some real ‘old school’ mechanism and tables of modifiers, which slowed gameplay somewhat.

The period flavour that I liked (remember that this was a transitional period between pike and shot - plug & Mackay's ring bayonet - then socket bayonet etc.) was determined by the actions that pike infantry can carry out when attacked by cavalry – with options to delay fire or more succinctly, form ‘defence against horse’ (which I take to be an interpretation of fraising the battalion as per Nosworthy, or forming a protective pike screen). Also, doing anything complex in terms of manoeuvre was really difficult and thus suits the period well. (Granted, I should have had a few wing commanders in there too).

The game did get me thinking however, with regard to what I’ve seen in recent sets of rules that I liked (there’s an underlying theme here – not all of these elements appear in BtLB of course).


·        Unit characteristics are a pain that are difficult to remember in a 2 player game, and should feature more generically as part of troop quality.

·        All mechanisms should be intuitive, i.e. a complete system change shouldn’t appear for ‘charging’ or ‘routing’ simply because it’s been tacked on to the set of rules (wargame rules designers could take a leaf out of modern/indie RPG designs here, where mechanics/moves are based off a single dice mechanic – as opposed to the glut of multifunctional systems which appeared in 1st ed AD&D, which seems to be the way of old school wargames design – cue rose tinted spectacle soliloquy on the good old days etc.).

·        There should be no separate disorder mechanic or extra subtractive dice rolls due to movement prior to charge etc. (again, integrate this into troop quality).

·        Troops are easily disordered in the late C17th, and there are intuitive ways to handle this (have I mentioned troop quality?).

·        Morale checks should be driven by troop quality (actually Fistful of Tows 3 does this really well. The whole game hinges off troops' quality/training/experience.

So here’s what I’ve liked recently:

·        Homebrewed ‘Muskets & Mayhem’ rules focus on troop quality, and it drives everything else, with intrinsic effects on morale.

·        The Snappy Nappy order system works beautifully, allowing better troops to be more flexible with orders (a no brainer when you think about it).

·        The Black Powder/Pike & Shotte order system is also equally fluid, allowing player generalisation over what troops can do, in a free flowing manner.

·        Maurice combat and melee is seamless, and matches the great resource management system. If I would change anything, it would be the dependence on cards (though that’s a significant task).

Systems like Field of Battle handle the chaos, confusion and 'smokey friction' of the horse and musket battlefield exceptionally well.

·        Beneath the Lily Banners, brings in period flavour. I love the fact that infantry attacked by horse gets a chance to put pikes ‘forward’ as per primary sources. I’m considering rebasing all of my Nine Years War figures, to allow for this kind of thing more easily (and allow singles for playing Donnybrook). The emphasis is on historical accuracy and supporting the unit in melee as it would have happened (or as the limited primary sources would suggest it uhhh…might have happened ;) )


But…excessive modifiers for melee etc. are simply boring and add nothing to gameplay; in fact they turn a game into drudgery.

Order chits are ok, unless done excessively. They get forgotten and clutter up the table in larger games sometimes. 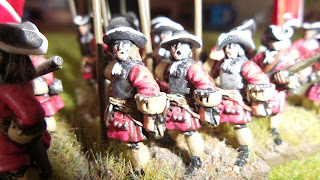 "Oy! No pictures on the battlefield pal! Move along there." 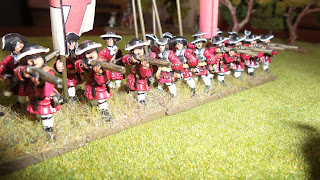 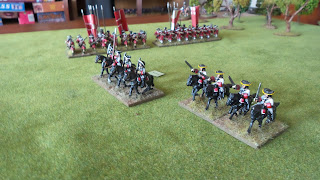 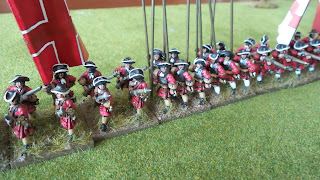 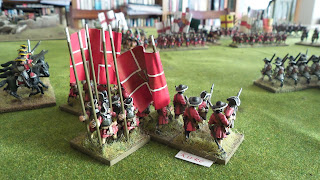 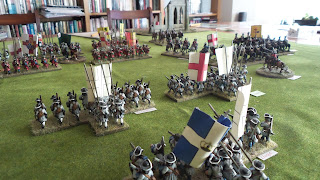 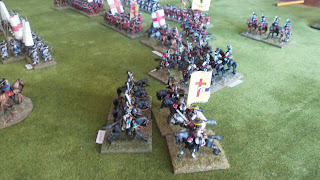 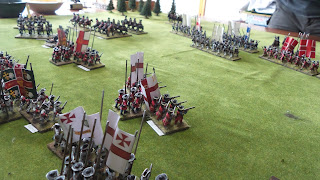 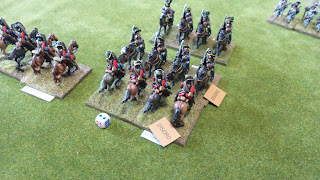 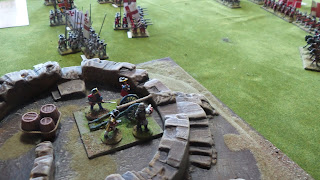 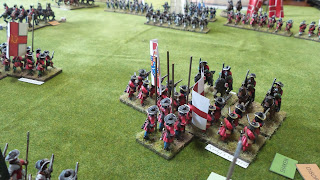 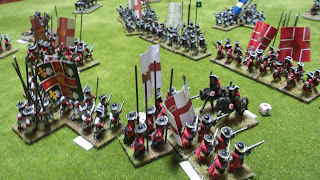 An epic clash between an English cavalry squadron and James's guards, where the latter tried to form 'defence against horse', but failed, with devastating results... 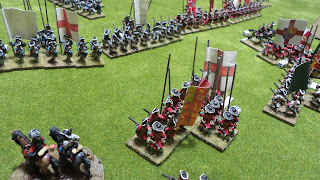 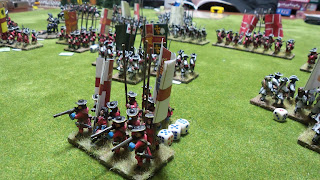 They eventually rout, with additional pressure from Enniskillener and English musketry. With little but Raw Jacobite musketry to respond, the Irish troops were doomed.

All of this pushes me toward developing M&M for late seventeenth century, and developing my own rules, tentatively entitled 1689 (named after the Priestly 1644 rules from Foundry in the 90s). Of course, I might be joking ;)

Yeah, like I’ll ever get time to do that.