An excellent return to Steve's Bunker with some AWI action.
In this instance we used BloodyBacks , care of Steve at 'Steve's Painting Shed' blog/fb place.

These again are a very nice set for AWI, with some key takeaways: 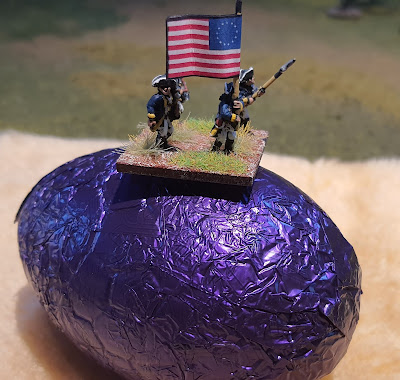 This was not your usual Eutaw Springs, and became quite bloody, as the Americans tried to 'hold 'em by the nose, and kick 'em in the ass'. It didn't quite work, but the British left at least felt a bit threatened in the end....

A very nice set of rules - and worth having a closer look at, in what is rapidly becoming a quest for the 'Holy Grail' of American Revolution rules.
Thanks to the guys for setting it up.
** UPDATE **
I believe this is Steve Jones' (designer of the rules) own version of the battle from YouTube. His rules are here.
Posted by Duc de Gobin at 16:02