For King & Parliament ...or 'Tonight's the night, if you play your cards right...'

I missed most of the good hype around Simon Miller's 'To the Strongest' ancient rules, though I knew that a grid and cards were involved, so when the two Steves set up a game of 'For King and Parliament' - the ECW version, I just had to attend.

Also of course, Simon has looked at a late C17th version of this, so already, he has my attention..

The key take-aways from the game for me were: 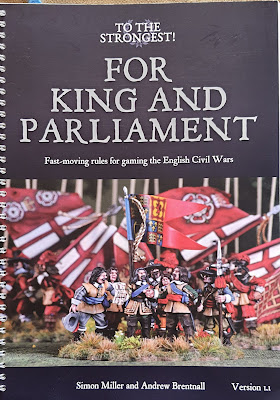 And as Bruce used to say 'Tonight's the night, if you play your cards right!'
(I fully appreciate that this 1980s/90s British TV reference is so far off base for my American friends, that its relevance as a meme, joke or otherwise humourous skit, is about as useful as a fart in a space suit...)
The figures are all from the two Steves' excellent 15mm stuff.

There is a lot to like in these rules, and this style of play. I love the fact that I can transpose this to Grand Alliance / Nine Years War / even Marlburian - I believe, with relative ease.
It's a very different style of play, but I think one that really lends itself to a good game - the tactics are somewhat different - but the key to play is knowing 'when' to commit. That's probably a lot closer to the real decisions made at this time, in these periods, than we actually realise.
More to come...
Posted by Duc de Gobin at 13:26

Email ThisBlogThis!Share to TwitterShare to FacebookShare to Pinterest
Labels: 15mm, ECW, For King and Parliament