A return to Volley & Bayonet with Pete. We're looking at a few different periods for a bi-monthly game, mostly with V&B, but also looking like Crossfire will see an appearance for the WW2 games.

This variant for an AWI game downsizes slightly, in order to do Guilford Courthouse. My chief concern was whether V&B would be flexible enough to give a similar result to historical, in that we would see a British force push to the end of the table, albeit exhausted and withered. That  actually seemed to work well, though we didn't get finished.

I saw a depleted British force with brigades on the verge of exhaustion by the time they got about halfway, and American militia that had been driven back.

The Maryland force were still fairly secure at game end - so really, a historical refight with a few tweaks but V&B is more than up for re-fighting a lot of these battles, and I think there is still some real period flavour

The turn sequence, as with most well designed GDW games, the substance is in the turn sequence - and the hex n chit boardgame parentage is there - but it honestly makes for a better game, and the style that gets so over-represented with glossy stylised hardback books with lovely pics, is not required.  With BP, this game would have been a pain in the a**. 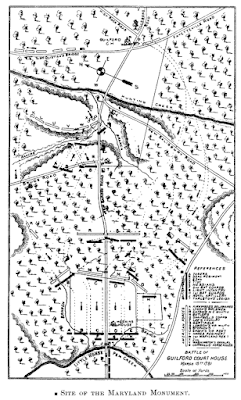 The main changes for the battalion scale vs the original regimental scale are: 200 men per strength point (rather than 500), 4" musket range (rather than 2") and 1"=50 yards (rather than 100 yds). In essence therefore, everything vs scale seen at Brandywine previously, is effectively halved in terms of distance and men and doubled in terms of range. Most of these amendments are available online - at Kieth Mcnally's site and the scenario is based on Dr Jeff Glasco's work.
That sequence has so much elegance in terms of units being 'spooked' even before fighting takes place, devastating musketry and advantage given to charging grenadiers vs weaker units. You find yourself making decisions that a commander in the black powder realm would make; including use of artillery and striving for that stationary troops effectiveness bonus. Put simply, it works. 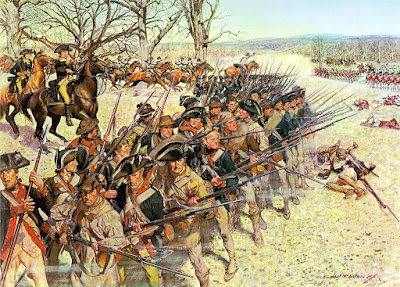 V&B will never look great on the bookshelf vs those 'great' hardbook books like BP, and I don't care...since the games it gives are accurate, fun, elegant and (key) leave very little room for argument. Most of the things we either discussed or got wrong in early editions have been resolved in the Road to Glory edition (including return fire from destroyed units and units going stationary on turn 'after' disorder).

As we ended the game, the British right had lost a unit, and had two brigades reaching exhaustion (Division Exhaustion / DE - under same rules from the army/regiment level game). We reasoned that yes, this would mean that they could drive for the Maryland units at the end of the table and yes, they might even gain a tactical victory, but again, Cornwallis's army would be pretty exhausted. Out conclusions were therefore that V&B works again - for this level of game.
Some rosters: 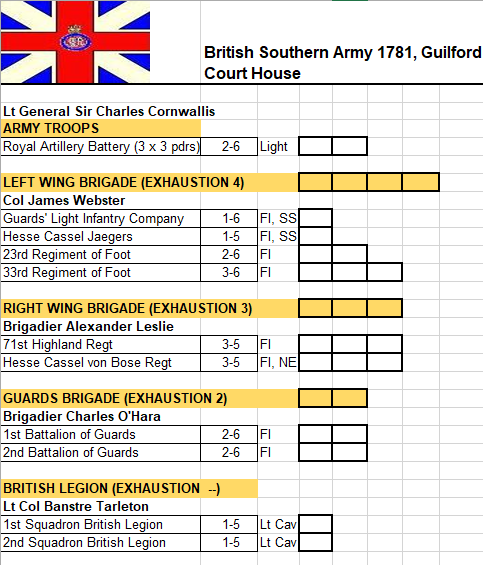 The American Battlefields Trust's excellent videos on the battle:

Email ThisBlogThis!Share to TwitterShare to FacebookShare to Pinterest
Labels: AWI, Volley and Bayonet